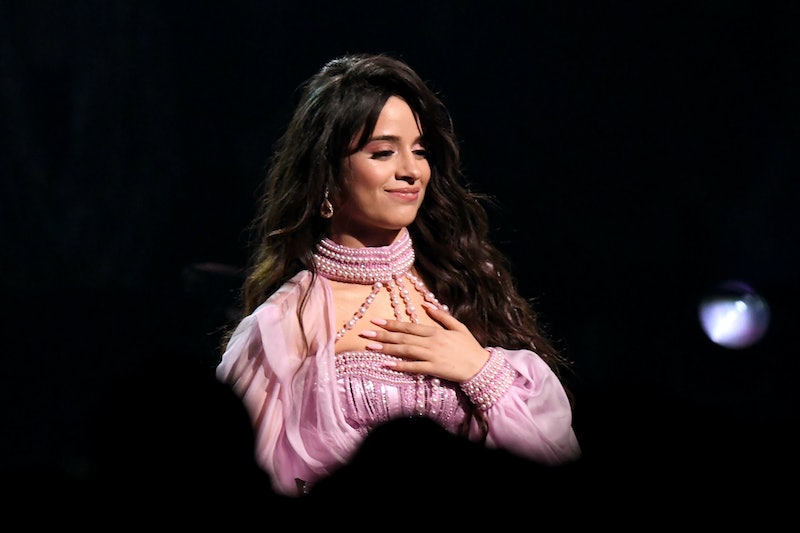 Camila Cabello is speaking out about her experiences with mental illness. In honor of Mental Health Month, Camila Cabello opened up about dealing with her "relentless" OCD symptoms and the resulting anxiety in an essay for The Wall Street Journal. According to Entertainment Tonight, the singer revealed that while she shares a lot of herself with her fans on social media, she has been hesitant to speak out about her experiences with mental illness.

"If you look at the pictures I’ve posted on Instagram over the last year, you’ll find pictures of me writing in the studio ... pictures of me cuddled up with my dog, Eugene, on a couch," Cabello wrote. "But here’s what there aren’t pictures of from the last year: me crying in the car talking to my mom about how much anxiety and how many symptoms of OCD I was experiencing. My mom and me in a hotel room reading books about OCD because I was desperate for relief. Me experiencing what felt like constant, unwavering, relentless anxiety that made day-to-day life painfully hard."

The "Señorita" singer added that she was too "embarrassed and ashamed" to speak publicly about her anxiety and that it was hard for her to "talk about what it feels like to be at war in our minds and in our bodies." However, eventually Cabello realized that in order to "heal" and find a way to manage her anxiety, she needed to actually open up about what was going on. "I needed to say those three revolutionary words: I need help," she wrote.

Cabello — who has previously talked about her experiences with anxiety — explained in her essay that for her, it "manifested in the form of obsessive compulsive disorder," which took a major toll on her mental and physical health. "To put it simply, it made me feel like my mind was playing a cruel trick on me," she wrote, explaining that she developed "obsessive thoughts and compulsive behaviors" that impacted her life.

"I couldn’t sleep for a long time, I had a constant knot in my throat, I had chronic headaches, and my body went through what felt like multiple roller-coaster rides every day," Cabello continued. The singer added that she never let her loved ones know just how much she was "really struggling."

However, now that Cabello has found the help she needed, she feels like she's "friends" with her anxiety, rather than being in an "internal war" with her thoughts. "I feel the healthiest and most connected to myself I’ve ever been, and nowadays I rarely suffer from OCD symptoms," the singer wrote. "Anxiety comes and goes, but now it feels like just another difficult emotion, as opposed to something that’s consuming my life."

She continued, "By doing the work and showing up for myself every day, I feel like I have more trust in myself than ever before." And ultimately, Cabello hopes her decision to open up about her OCD and anxiety will encourage others to get the support they may need: "Far from being a sign of weakness, owning our struggles and taking the steps to heal is powerful."