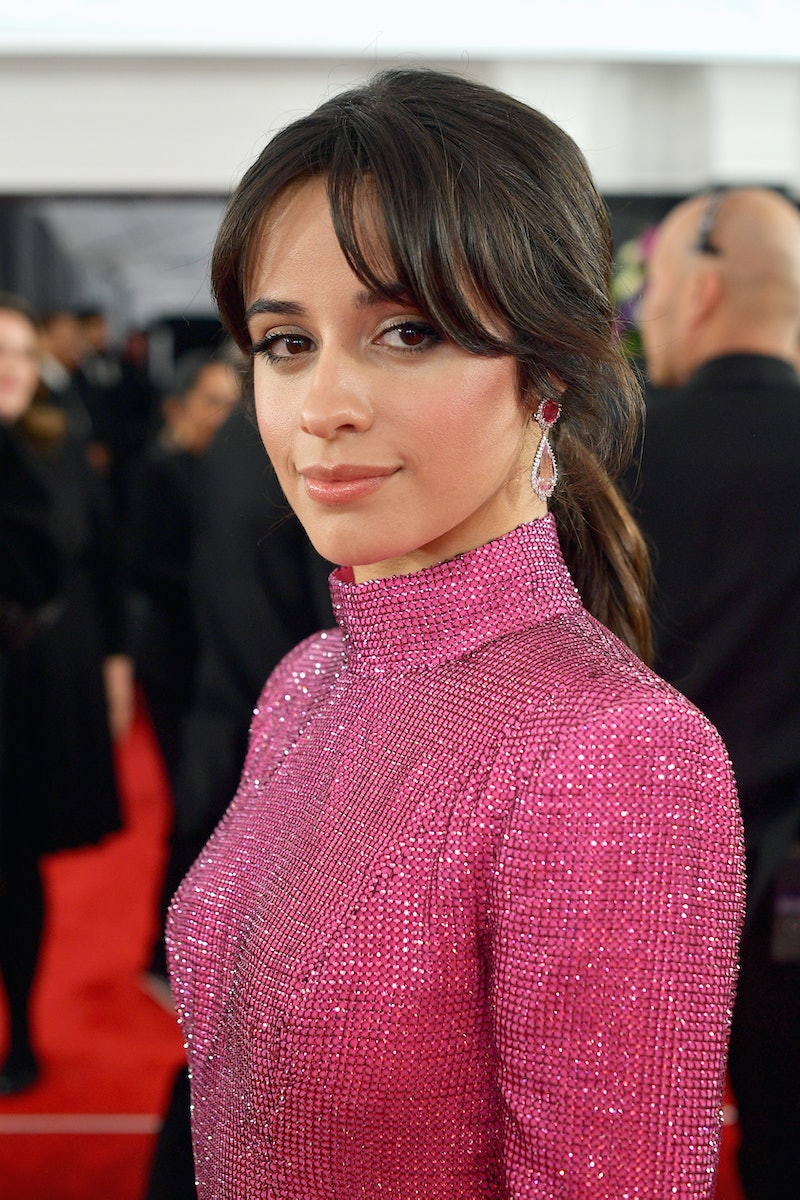 Although she had promised some surprises leading up to the ceremony, Camila Cabello's 2019 Grammys performance was way more than fans ever expected, if only because of all of her very own family members that took the stage along with her and some amazing "supporting" artists. The former Fifth Harmony star told Entertainment Tonight earlier this week that "surprises" were in store when she opened the 61st Grammy Awards with J. Balvin, Ricky Martin, Arturo Sandoval, and Young Thug in tow. But it wasn't until she walked the E! red carpet that she divulged what that surprise would be.

Cabello told Ryan Seacrest that her whole "crew" was with her — her mom, dad, sister, and grandparents — and that they would be "on stage with her" when she performed. Although she didn't announce them during the performance, it's possible they were in the various groups of extras on the stage or just there in spirit.

In any case, Cabello told Entertainment Tonight in the aforementioned interview that what she really wanted out of the night was to "enjoy it and have it be a celebration of my first album and "Havana" and everything that song has done in my life."

Judging from her performance, it looked she got what she wished for.

The stage was super elaborate — set up with an exposed house, fire escape, and city street. Cabello started with "Havana" in one of the top rooms and made her way down to the "street level." She was joined by both Young Thug and Balvin throughout the performance, going into "Mi Gente." But the real highlight was when Ricky Martin took the stage and danced with her, as Sandoval played the trumpet. The entire thing — from the set, the costumes, the music, and the talent — was a really fun celebration of Latinx music and how much the genre has lended to American pop music.

Cabello, who was also nominated for Best Pop Solo Performance ("Havana") and Best Pop Solo Album (Camila), knew exactly how moving and fun it was going to be, too. She had said that the performance was inspired by her grandmother, and it showed. Even if she was a little nervous about meeting her expectations. "I definitely feel a little bit nervous right now, but I think that the more nerves, the better the show. You know, but it's basically based on my family, specifically on my grandma’s upbringing," Cabello told ET of her opening performance on the red carpet.

"She was raised in Havana in a thing called a Solara Benero, which is basically like a poor person’s — it’s like a big house, but each family only has one room in the house, and there’s a common patio that everybody shares and the musicians would go and jam out and such," Cabello explained.

Although her grandmother wasn't available for comment, it's likely that she was very, very proud of that her granddaughter was able to lead all those other artists through the performance. There was no one not dancing or smiling in the crowd, or at home, for those opening minutes. Which is exactly what a Grammy opening performance should do.