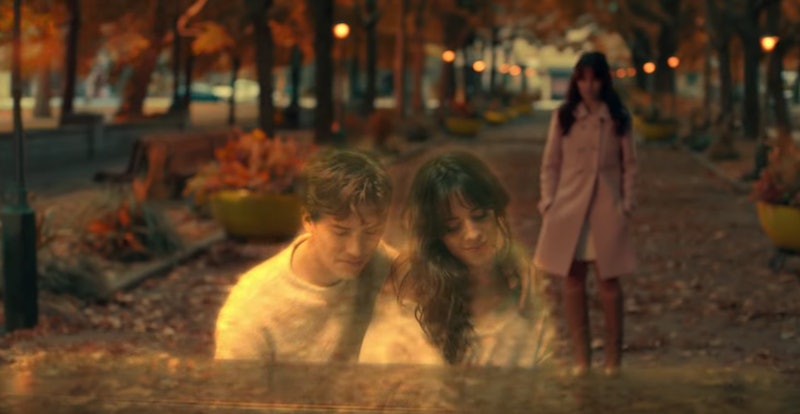 While his twin brother, Cole Sprouse, has been busy investigating all of the secrets and scandals of Riverdale since graduating from NYU, Dylan Sprouse has stayed out of the spotlight. But now, Camila Cabello's new "Consequences" music video marks Dylan Sprouse's dreamy return to the small screen. In the video, the Suite Life of Zack & Cody alumnus stars in a role he was born to play: the love interest to young pop star Cabello.

The singer dropped the music video for her new single, "Consequences," on Wednesday Oct. 10, which features Sprouse as one half of a torrid, passionate relationship that eventually fell apart, leaving Cabello heartbroken. While walking through the park by herself, Cabello recalls the various stages of the romance, with Sprouse appearing in her gold-accented memories as a handsome, piano-playing ethereal boyfriend. As Cabello walks down the path, the seasons change from fall into winter, and the couple trades kissing and cuddling among the changing leaves to fighting and crying as the snow falls.

The literal walk down memory lane culminates with Cabello enjoying one last dance with her lost love, being (literally) swept off her feet to twirl around in front of the moon with the ghost of Sprouse, before the couple shares one last kiss goodbye. (Make sure you have tissues on hand before the song hits its final chorus.)

This marks a highly anticipated return to the small screen for Sprouse. After starring on The Suite Life alongside brother Cole for seven years, Sprouse took a break from the spotlight in order to attend NYU, where he majored in video game design. But instead of immediately returning to Hollywood, as Cole did with his starring role in Riverdale, Sprouse decided to take some time to pursue a different passion: brewing mead.

According to the New York Daily News, the actor turned his dorm room into a brewery, where he began experimenting with different ways of brewing mead, which is a honey-based beer. And, in 2017, he use that passion to create a new business venture, founding the Williamsburg, Brooklyn-based All-Wise Meadery, along with a friend. The pair were even featured in a new doc-series, Mead In America, which is all about mead and the people who make it.

In addition to billing Sprouse as "the youngest Master Brewer in the United States" at the age of 24, All-Wise's website describes the business as a "an all-local, heathen run brewery," and allows any hard-core Suite Life fans who are of legal drinking age the opportunity to order some of the company's signature mead straight to their homes.

"I love acting as a passion," Sprouse told IndieWire in December 2017 about his decision to balance acting with a steadier side hustle. "It’s something that is really fulfilling to me. But the core of it, which is one of its most difficult aspects, is that it’s commission-based. Coming out of school, having remembered that in my younger life those dead periods were very tough, I decided I’m going to invest my money into a business and open up my brewery so that I don’t have any of those worries."

Sprouse added, "I can kind of make money through my other passion, which is brewing, and that’s a pretty stable business, and it would free up my timeslot to take roles that I really liked and that I thought were interesting."

The former child star began to dip his toe back into acting last year with some of those aforementioned "interesting" projects, starring in the indie films Dismissed, which was released on VOD at the end of 2017, and Carte Blanche, where he starred opposite model Suki Waterhouse. And while Sprouse does have a few more indie films on his slate (some of which have already been completed and are awaiting distribution), none of those projects are quite as exciting, or mainstream, as this new video, which allows fans to watch everyone's favorite Disney Channel crush make out with a pop star.

If nothing else, it looks like both Sprouse twins are ready to make their mark on Hollywood once again. Now, if only someone can convince the two to reunite on Riverdale, fans really will be living the sweet life once more.