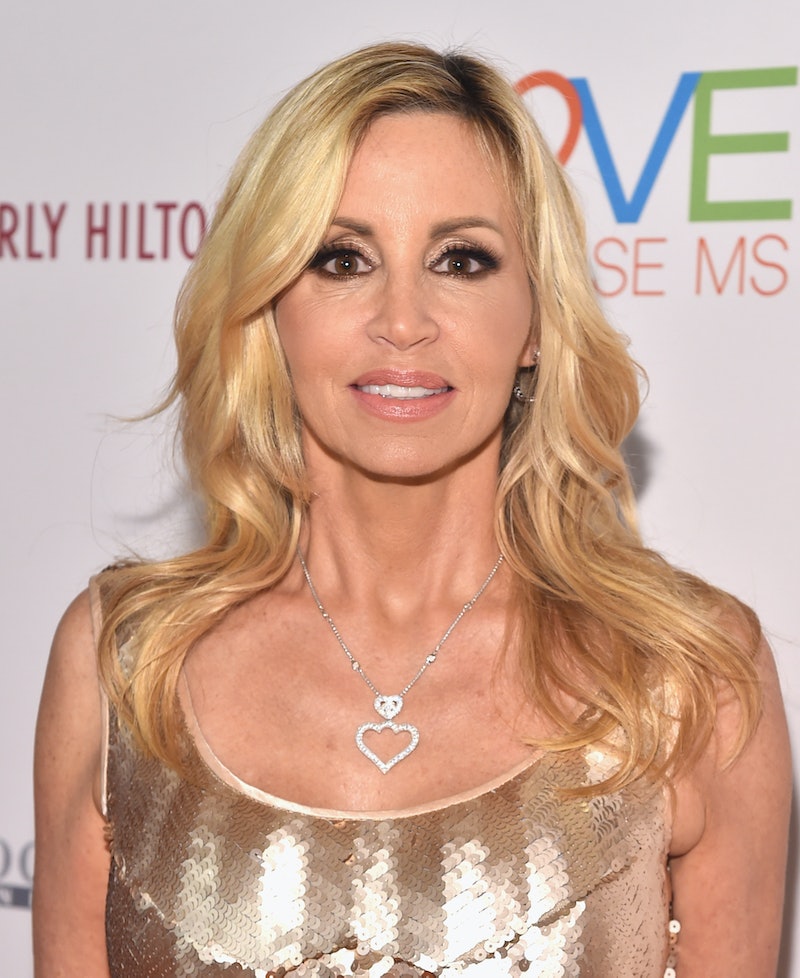 In California, three major wildfires continue to devastate communities in the Northern Sierra and West Los Angeles. On Saturday, Real Housewives of Beverly Hills star Camille Grammer revealed her Malibu home was lost in the Woolsey Fire, joining a growing list of celebrities whose homes reportedly have been destroyed in the inferno. In an emotional post on Instagram, Grammer shared that firefighters were unable to save her home. The message noted that though unable to save the foundation of the house, firefighters were able to recover some personal items. The photo showed an aerial image of the fire consuming the property, and was captioned:

Sadly my house couldn't be saved. The courageous firefighters were able to save my cars and personal items recovered from my home. I thanked the fire captain and his team of firemen for all of their hard work. He took the time to explain what happened and I'm grateful for all of their hard work trying to save my home. Sad we lost our home but grateful that my family is safe.

Luckily, Grammer's family, including children Mason and Jude Grammer, were unharmed by the flames. The caption also included a special thank you for the firefighters working to contain the flames, and for the friends who informed the family of the mandatory evacuation in the area. "Luckily we quickly evacuated our house yesterday after a patrol car drove up the street announcing mandatory evacuations. I'm grateful for my lovely neighbors and friends who kept me informed and for their help this evening," she wrote. "Thank you all for caring. Special thanks to Fire Chief Rash and his brave team of firefighters." In the comments, fans shared well-wishes for continued safety.

Grammer's home is among the residences that were beyond saving in the fires. According to The New York Times, approximately 6,700 structures, most of them homes, have been destroyed by just the northern section of the fire. The destruction makes the Camp and Woolsey fires the most devastating in the state's history.

Many stars have shared safety updates and mourned the loss of their homes on social media. On Instagran, Robin Thicke and girlfriend April Love Geary shared footage driving north to escape the fires. The video shows the sky is dark with smoke and is captioned: "Family is safe! Praying for everyone out here!" Lady Gaga also reached out to fans, posting an update on Twitter. She wrote: "I am thinking so deeply for everyone who is suffering today from these abominable fires & grieving the loss of their homes or loved ones. I'm sitting here with many of you wondering if my home will burst into flames. All we can do is pray together & for each other. God Bless You."

In addition to destroying homes, the fires also brought down some Hollywood landmarks, including a portion of the ranch set for HBO's Westworld, and the lower house of the Bachelor mansion. On Sunday, the fires were still burning in California. A few celebrities went online to encourage fans to donate or offer any other support possible. On Friday, Alyssa Milano shared a link to the California Fire Foundation, urging people to give whatever possible to firefighters and those evacuating their homes.

The most important matter during the wildfire emergency is making sure that all residents make it to safety. However, the destruction of homes and property is sure to be traumatic for those displaced by the wildfire. Grammer, fellow stars, and the community as a whole, will likely have to grieve the destruction as state firefighters continue to work toward containing the fire and begin the recovery process.