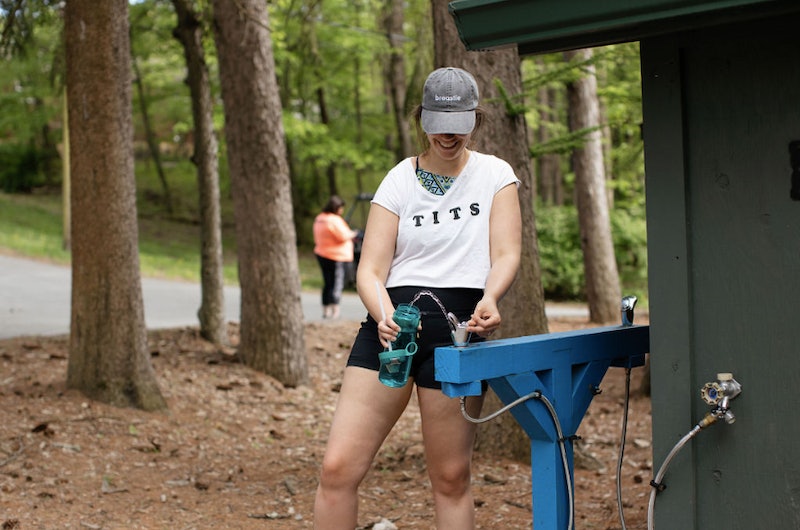 For many of us, summertime is synonymous with summer camp. Maybe you grew up going to sleep away camp, where you and a dozen other girls schemed over how to prank the boy’s cabin. Or maybe you spent your summer vacation watching Lindsay Lohan in The Parent Trap. No matter how you spent those long, hot days before fishing your backpack out of your closet, summertime (and summer camp) is a uniquely nostalgic experience that reminds us of being a kid; one of the last times we could be truly carefree. It’s that sense that the founders of The Breasties, a nonprofit that supports young women affected by breast and reproductive cancers, wanted to tap into when they created their most ambitious event yet: Camp Breastie, a weekend-long, 500-woman strong experience that took place this past May, comprising panels, workshops, outdoor activities, and a ‘60s-themed dance party that brought down the house.

The Breasties was founded in 2017 by four women, all of whom had been affected by breast cancer before they turned 30; Leslie Almiron, Allie Brudner, Brianna Majsiak, and Paige More. After connecting on Instagram and IRL, they realized they wanted to bring the same support they found in each other to more women who were also searching for connection. Since receiving 501(c)3 status in February 2018, the group has been able to provide eight wellness retreats free of cost to women who are cancer survivors, previvors, or who have been caregivers to loved ones with cancer, with two more retreats on the calendar for 2019. They also facilitate in-person meetups in different cities and maintain a thriving Instagram community.

But, as co-founder Allie Brudner, 30, tells Bustle, “With the number of retreats we have, we received almost 10 times capacity in applicants. So there are hundreds of women that we can't accommodate because we just don't have the resources or space.” Brudner, who was diagnosed with breast cancer at age 28, says the co-founders asked themselves if they could do a “mega-retreat” to hold space for all these women.

“The idea of camp just popped into our heads,” she says.

Over the course of eight months (and “lots of Google Docs,” Brudner says), the camp took shape. The team found a campgrounds in the Poconos where they could accommodate 500 women (who each paid a $150 fee to attend, with the total cost of attendance offset by grants, fundraising efforts, and in-kind donations). With the help of 38 cabin leaders, the team created three days of summer fun — an emotional outlet for women whose lives had been changed by cancer.

On top of individual opportunities to share their stories in their cabins, the attendees of Camp Breastie also took part in a camp-wide campfire their first night at camp, where a few women shared their experiences with cancer in front of the broader group. There were also panels where women could share how they dealt with grief, sex, and other issues after diagnosis. It was also important to the founders to make space for fitness activities, like volleyball, kickball, a rock wall, and a ropes course. After recovering from cancer, Brudner says she felt scared to get back into her previous active exercise routine. “I was scared like what my body would feel like, and if was I going to be able to handle it,” she says.

Dani Stumeier, 26, attended camp, and was one of the cabin leaders. She and Brudner had connected after Stumeier was diagnosed with ovarian cancer in 2017, when she was 24. She tells Bustle she attended her first Breastie event, a workout class, a few weeks after finishing chemo. “It was a very low impact workout and I mean, it was difficult for me.” She says that at one point, “Thunder” by Imagine Dragons came on, "and I was overwhelmed with emotions. I was crying because … it was the strongest I'd felt since being diagnosed.” From then on, she says, she knew “The Breasties were just going to be a huge part of my life.”

But when she was asked to be a cabin leader, she was a little hesitant. After dealing with anxiety and depression in the aftermath of her treatment, she says she had to take a step back from The Breasties in order to heal emotionally. “I was really nervous … to throw myself into a weekend surrounded by cancer,” she tells Bustle. Ultimately, though, she accepted, saying she wanted to contribute to something that the cofounders “were putting so much of their heart and effort into.”

Mackenzie Alleman, 30, also served as a cabin leader, and spoke on a panel about grief during camp. Alleman lost her mother to breast cancer five years ago, and in 2016, found out that she had tested positive for the BRCA1 gene, meaning she was at an increased risk of developing breast and ovarian cancer herself. After undergoing a preventative mastectomy, she connected with Paige More, one of the cofounders who shares her BRCA positive journey on the Instagram account @paige_previvor.

Through More, Alleman came to know the other co-founders, and ultimately became the ambassador for the Philadelphia, Pennsylvania chapter of the Breasties. This, she says, gave her an advantage over the other cabin leaders: “I wasn't flying in with my [cabin] decorations,” she tells Bustle. “I totally pulled in that ‘90s camp theme and Lisa Frank’d some notebooks. I’m all about the competition,” she says, though she admits that it was “not a competitive environment.”

“We were camping in these beautiful cabins,” Stumeier says. “There were little things I tried to do to make my cabin feel homey,” including writing fun messages in chalk on the mirrors and customizing fanny packs for the girls in her cabin. (Yes, glitter was involved.)

Being part of the cabins wasn’t just fun and games; it was also an opportunity to be seen. Another cabin leader, Anjali Karamchandani, 33, tells Bustle that it was “a really cool experience to be bunking with 14 or 15 other women, and to be able to laugh and joke about an experience that was so difficult.” Being in the cabins allowed women to share their history with cancer in intimate, completely judgment-free spaces, where everyone knew that everyone else in the room could relate to what they’d gone through.

Some campers found their way to the Breasties because they couldn't find a community of young survivors near them. Cara Nault, 37, traveled to camp from British Columbia, Canada, with a friend. “When we got to camp, it felt like home. The women are so welcoming and they really gave us an opportunity to share our stories, where we didn't feel that opportunity at home. It's just different.”

“Yes, cancer is what brings us all together. But clearly, cancer does not define any of us.”

Breasties co-founder Brianna Masjiak, 25, tells Bustle that for her, one of the most impactful things was seeing posts on Instagram after camp of women helping each other get to the top of the rock wall. “It's not lost on us how important those moments are, to have that community around you when you are doing these things that you didn’t think you could do anymore,” she says.

Because ultimately, the event was about community — and creating a space for all these women to heal from the emotional toll of cancer.

“The weekend gave me an opportunity to really release and to shed tears in the company of women who understood,” LaTonya Davis, 51, tells Bustle. Davis lost her mother and her sister to triple negative breast cancer, and survived the disease herself; the weekend of camp was the third anniversary of her sister’s passing. “I don't want to burden people with what I'm going through, because I'm always the tough cookie. I think in a lot of cases [Camp Breastie] was the first time that these beautiful souls really expressed themselves in that way in a safe space with no judgment, without friends or family … because you don't want anyone to worry.”

Camp Breastie gave these women a space to heal without judgment, and without pressure to be strong for anyone but themselves. “For me, I put up one post the day I got the bad news, and when I went for my bilateral mastectomy, but I kept it fine around me because I was scared of the judgment,” Nault says. “I’ve always been the strong one who just doesn't have a moment of weakness. And I think, you know, nobody knew how to reach out to me because I was the strong one.” She says Camp Breastie was the opposite experience: “When we walked through the door, the most special part was you didn’t have to worry about what you say, or how you look.”

“I missed like two years of my children lives just having surgery, and I was so angry at the world,” Karamchandani says. “And when I went to camp, I was so grateful to be there, to be alive, to be in this room and to be BRCA positive. Yes, I underwent everything, but I never was as confident as I am today. All the women I've met, I would have never met them. I have all this knowledge at my fingertips.”

“Yes, cancer is what brings us all together,” Brudner says. “But clearly, cancer does not define any of us.”

You can follow The Breasties on Instagram or visit their site to find local meetups near you, or apply to attend a retreat. You can also donate to The Breasties to support their mission.

More like this
You Can Stay At The 'Hocus Pocus' House On Airbnb
By Alexis Morillo
Craving The Beach? Here's Your Guide To A Solo Vacation In Turks & Caicos
By Alexis Morillo
Rachel Zegler Reveals She Had Breast Cancer Scare
By Radhika Menon
This Psychological Effect Might Be Keeping You From Hitting Your Goals
By Lexi Inks
Get Even More From Bustle — Sign Up For The Newsletter