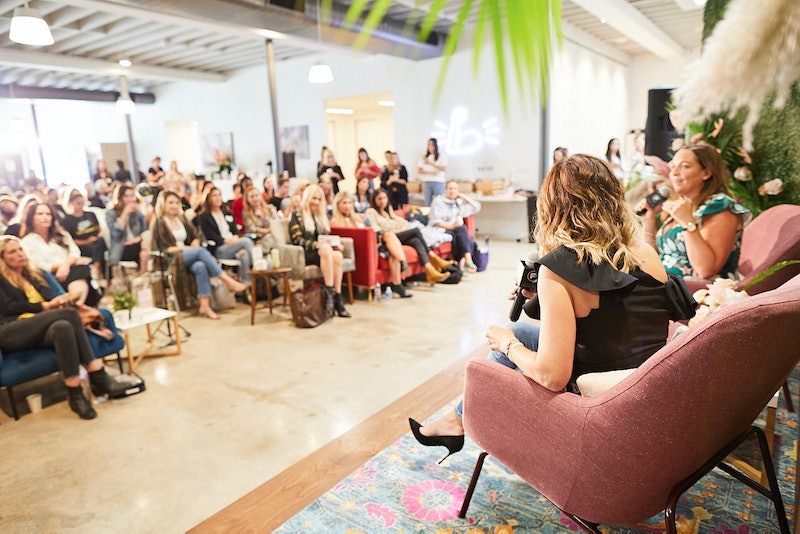 Picture it: You have a big idea you’ve poured your energy and savings into, but if you buy one more $6 latte “renting” your table at the local coffee shop, you won’t be able to bankroll a prototype.

You and your work wife have quit your jobs to start your own thing, and you want a place to build the business that isn’t either of your apartments.

You’re writing the book that will position you as a thought leader in your industry, but all of the coworking spaces you’ve tried smell like pizza and socks.

Enter: The Riveter, the venture-backed co-working startup whose spaces have quickly become hubs for those seeking not just a desk or even a pretty environment but a work culture built on gender inclusivity and equity. This week in New York City, with Bustle Digital Group as a media partner, The Riveter will host its first Summit, an event bringing together women luminaries across business, government, media, and activism to talk about how we build a more equitable work future.

The sold-out conference, which will take place Nov. 6 and 7 in New York City's meatpacking district, will feature conversations, keynotes, and panels with Stacey Abrams, Lindy West, Abby Wambach, Robin Roberts, Stacy London, Arlan Hamilton, Liz Plank, Rebecca Minkoff, Alicia Menendez, and many more on themes ranging from how to negotiate and invest better to how we rebrand motherhood at work.

"We all could use some inspiration and activation right now."

The Riveter is the brainchild of founder and CEO Amy Nelson, who was a corporate litigation attorney when she announced her first pregnancy and immediately found herself put on less interesting, less challenging cases. After the birth of her second daughter, a promotion evaporated. To figure out her next act (she thought it might be a baby sleep consulting company), Nelson began taking classes at coworking spaces in Seattle, where she is based. She noticed that the clientele of these supposedly forward-thinking spaces closely resembled the population of the bro-y corporate world she’d come from: white, cisgender, male. As she put it to Quartz, “If coworking is the future, then why does it still look like a frat house?”

That’s when it came to her: Nelson would open a coworking space "built by women, for everyone" that made gender equity its foundation. And, she soon decided, she would do it across America, starting not in the epicenters of money, power, and glamour — not New York, D.C., or Los Angeles — but in secondary markets where she could be in touch with what working women want across the country.

The Riveter now has 10 locations in seven states and is opening more next year, finally landing in New York, Atlanta, and D.C. "We’ve been looking forward to expanding to the East Coast since our early days in 2017,” Nelson (who has had two more daughters in the meantime) says. "The fact that we’ve sold out our inaugural Summit in the city makes it that much more exciting."

"Information and stories are power. Period."

Events have become a huge source of revenue and visibility for many industries, from media to finance to beauty, so hosting the Summit isn’t a surprising move. (So has brand-adjacent content, thus The Riveter’s move into content this year, featuring articles and op-eds from prominent writers and content partners like The Muse, Zora, and Supermaker.) The caliber of the speakers isn’t surprising either, given the programming success The Riveter already has under its belt. This year it has hosted conversations with most of the 2020 presidential candidates.

However, Nelson hopes the Summit will me more impactful than even those efforts. "We all could use some inspiration and activation right now. We’re living in complicated times, and the coming year is going to be especially demanding,” she says. "No matter what progress or change you’re after, be it personal, professional, or even political, we hope what we’ve programmed sparks something."

Nelson's abiding hypothesis is that inclusive collaboration and networking are actually possible, and that change can be propelled by the simple fact of two women realizing they have had similar experiences, and figuring out how to build a saner work life for all.

Head to The Riveter to check out the Summit’s jam-packed agenda. You can read our coverage on Bustle, too, and follow along in realtime on Instagram at @Bustle and @TheRiveterCo and on Twitter by following the @TheRiveterCo.

More like this
Savannah Guthrie Got Her First-Ever Tattoo With This Former Wild Child
By Suzanne Zuckerman
These 3 Zodiac Signs Could Write A Bestselling Novel
By Brittany Beringer
This Is When Netflix Is Going To Start Charging You For Sharing Passwords
By Darshita Goyal
These Are The Fastest Electric Kettles You Can Buy
By Margeaux Baulch Klein
Get Even More From Bustle — Sign Up For The Newsletter
From hair trends to relationship advice, our daily newsletter has everything you need to sound like a person who’s on TikTok, even if you aren’t.