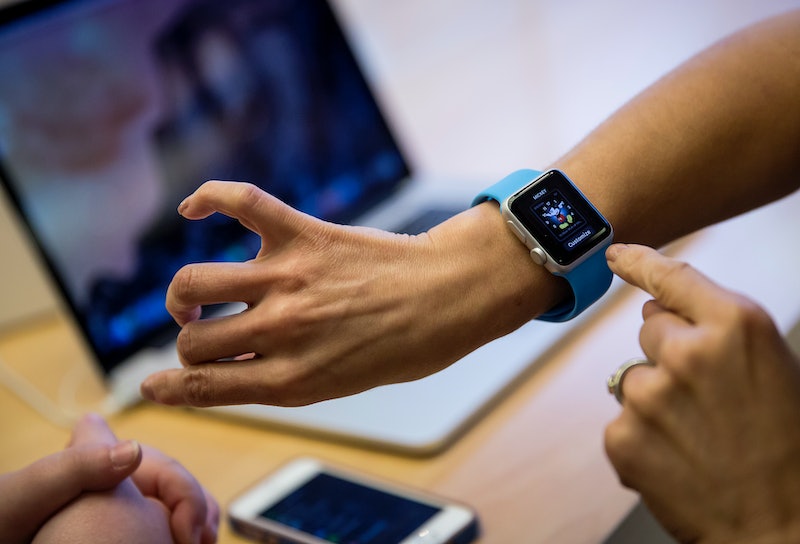 Wearables like your Apple Watch can track your fitness activities and health stats, while streaming all your favorite songs from your wrist — making keeping track of your health more fun and high-tech that it ever was. But one woman's Apple Watch did a lot more than track her run time, or blast her favorite '80s mix: it helped her detect an irregular heartbeat, indicating a potentially life-threatening thyroid problem, the Topeka Capital-Journal reported.

According to Today, Heather Hendershot was watching TV on the couch when her Apple Watch started beeping — detecting that her resting heart rate was too high. The 25-year-old was young, had given birth four months prior without complications, and had no history of heart problems. A lifelong athlete, the 25-year-old mother discovered that her resting heart rate had jumped to a super-high 120 beats per minute — with the average range being 60 to 100 beats per minute, Hendershot was a little worried at first, but when her heart rate jumped even higher to 160 beats per minute, she knew something wasn’t right. Hendershot told Today that, because she believed herself to be healthy, she thought “Maybe the watch is a little off or something.”

When her husband tested the watch on himself — and got a normal reading — Hendershots was still slow to rush to conclusions. As the beeping continued over the next 24 hours, though, her husband, Cody, urged her to get checked out. A trip to the hospital revealed that Hendershot’s Apple wearable was accurately detecting severe hyperthyroidism — driving her heart to a potentially life threatening arrhythmia.

“To have your heart race and not be aware of it is not normal. It’s interested that a device told her she was not doing well, and she acted on it,” endocrinologist Dr. Alan Wynne told Well + Good.

Like Hendershot, many doctors were skeptical at first when Apple announced that the newest iteration of the wearable would come equipped with heart rate sensors. Many worried that the device would prove inaccurate, and cause higher stress rates due to false positives, the Daily Mail notes. But the built-in technology received top marks from Stanford earlier this year, and in Hendershot's case, the Apple wearable ended up being a life-saver.

Hyperthyroidism, or an overactive thyroid, is a pretty common condition — affecting about twelve percent of the population, according to the American Thyroid Association. Symptoms of the thyroid illness can encompass a pretty broad range, and can include a sudden drop in weight, sweating, a rapid or irregular heartbeat, increased appetite, anxiety, or fatigue. Hyperthyroid is sometimes tricky to diagnose, because it can look like other health conditions. Hendershot didn’t pick up on the uptick in her heart rate on her own, but thanks to her Apple Watch, she was able to get medical help before her health was seriously impacted. If left untreated, Hendershot might have developed thyroid storm, a potentially life threatening condition where heart rate, blood pressure, and body temperature become high — with potential lethal complications.

People experiencing thyroid symptoms are encouraged to get checked out — a pretty simple blood test can detect thyroid issues, and timely intervention is key. Hyperthyroidism can stem from different things; Graves disease, an autoimmune disease, is the most common cause of an overactive thyroid. But postpartum thyroiditis can also cause the condition, and it’s important to determine the cause of any thyroid mayhem as this determines the best treatment plan. For now, Hendershot is on medication to manage her thyroid and heart rate, and, according to Today, she encourages others to pay attention to health warnings: “Go to the doctor once a year [...] You don’t have any idea about your health until it gets bad.”

So while your Apple Watch is great for storing your fitness data, tracking your sleep, and even streaming your favorite tunes, it’s heart rate tracking feature is clearly impressive — it may even save your life.