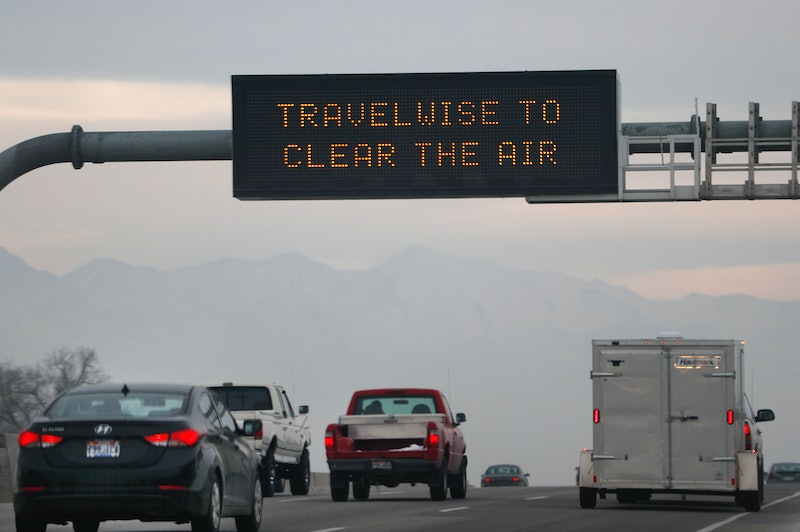 While it sounds like a far-fetched plot from a science-fiction move, new research suggests that removing carbon dioxide from the air to halt global warming isn't something dreamed up in Hollywood. It's no secret that whether or not climate change can be fixed is a contentious topic, but a new study published in the energy journal Joule outlines a way to effectively suck CO2 out of the atmosphere. Sound totally bananas? It actually makes a lot of sense, and it could be a game changer in efforts to save the planet.

It's called direct-capture technology (DAC), and essentially converts CO2 into carbon-neutral hydrocarbon fuels, enabling carbon-free energy to be converted into high-energy-density fuels. What's more, the study touts this as a cost-effective method to successfully remove CO2 from the atmosphere. And by cost effective I mean really, really cheap — $94 to $232 per ton of CO2 cheap. If you can't picture a ton of CO2, the website Building Energy Resilience suggested you think of a 1,250 square foot house.

"If these costs are real, it is an important result,” Ken Caldeira, a senior scientist at the Carnegie Institution for Science, told the Atlantic. "This opens up the possibility that we could stabilize the climate for affordable amounts of money without changing the entire energy system or changing everyone’s behavior." According to the study, DAC has been explored as possible tool for fighting climate change as far back as 1991, though previous cost analysis stats are much higher. Affordability is one of the things that makes these new findings so exciting.

In it's simplest terms, the process basically takes CO2 that's already in the air, puts through the DAC process, and puts it back into something like your car as gas. While your vehicle will still emit CO2, it won't release any new CO2, into the air. Think of it like a really big recycling project. The fact that this method is being built using existing technology makes it all the more feasible.

"What we’ve done is build a [direct-air capture] process that is — as much as possible — built on existing processes and technologies that are widespread in the world," David Keith, a professor of applied physics at Harvard and the lead author of the study, told the Atlantic. "That’s why we think we have a reasonable possibility of scaling up." Carbon Engineering, which was part of the study, and was founded by Keith, has been working on the technology since 2009. The company noted on its website that the prototype and pilot demonstrations can remove what's equal to the emissions from 250,000 cars per year.

If it's adopted on a large scale, DAC could create a sea change in the way scientists approach global warming. "We envision industrial-scale air capture facilities, sited outside of cities and on non-agricultural land, that supply CO2 for fuel synthesis, and eventually for direct sequestration to compensate for emissions that are too challenging or costly to eliminate at source," Carbon Engineering explained on its website.

Others in the scientific community spoke favorably about the research. "The strongest part of this paper, in my opinion, is the fact that they’ve actually tested the technology in a prototype plant for a few years," Scott Hersey, an assistant professor of chemical engineering at Olin College, told the Atlantic. "That’s a big deal, and offers a proof of principle that’s way stronger than simple calculations or computational models."

Because, without testing to scale, this idea sounds like another sequel to Back to the Future. But, the study proves that something that might have previously only been seen in a science fiction book or movie is one step closer to becoming a real solution to global warming. And, the best part is that you won't have to buy a new car for this air-to-fuel method to power your gas tank.

"Our clean fuel is fully compatible with existing engines, so it provides the transportation sector with a solution for significantly reducing emissions, either through blending or direct use," Steve Oldham, CEO of CE, said in a press release on the company's website. "Our technology is scalable, flexible, and demonstrated." Welcome to the future.