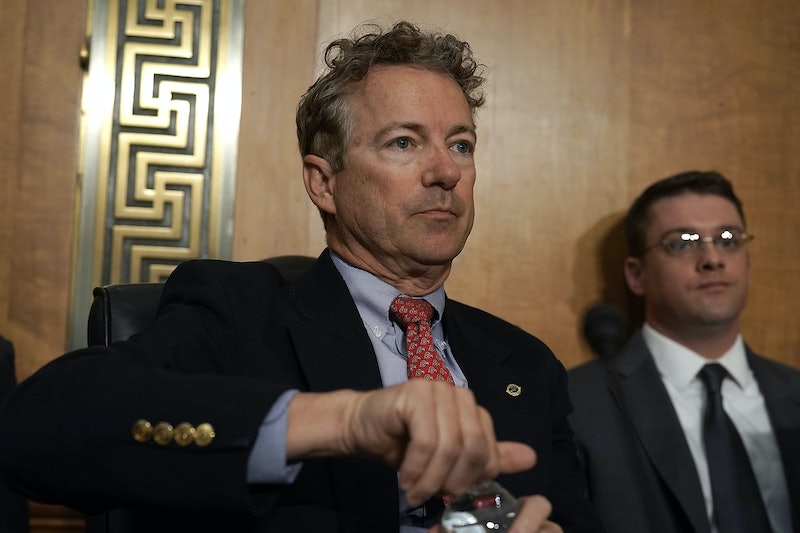 President Donald Trump used a national emergency declaration in an attempt to get around Congress' decision not to fund his wall on the southern border — but as it turns out, Congress may not be content to let the president usurp its authority on budgeting matters. Congress can override a state of emergency — and one Republican senator might be the deciding vote to make that happen.

"I support President Trump. I supported his fight to get funding for the wall from Republicans and Democrats alike, and I share his view that we need more and better border security," Sen. Rand Paul (R-KY) wrote in an op-ed for Fox News on Sunday. "However, I cannot support the use of emergency powers to get more funding, so I will be voting to disapprove of his declaration when it comes before the Senate."

In the House of Representatives, Democrats passed a resolution of disapproval of Trump's declaration of emergency, and now the Republican-controlled Senate is required to vote on it, as The New York Times wrote. As Paul explained in his op-ed, he plans on voting alongside Senate Democrats and three of his Republican colleagues — Sens. Susan Collins of Maine, Thom Tillis of North Carolina, and Lisa Murkowski of Alaska — who have also said that they don't support Trump's move to expand executive power in this manner.

Paul, who as The New York Times wrote, has always publicly affirmed his commitment to a small government, said that he opposed Trump's declaration on the grounds that it expanded executive power beyond what the Constitution allows for.

“I stand with the president often, and I do so with a loud voice,” Paul wrote. “Today, I think he’s wrong, not on policy, but in seeking to expand the powers of the presidency beyond their constitutional limits.”

Several Republicans have expressed their hesitation about Trump's declaration for the same reasons, according to The Hill. If Trump is allowed to make this declaration without any objection from Congress, the argument has gone, then a future Democratic president could make a similar declaration to push through liberal legislation. The congressional resolution of disapproval would stop the state of emergency in its tracks, as The Hill wrote — but there's still one significant problem for critics of the declaration.

Before the resolution actually stops Trump's declaration, it has to get the president's signature just like any other legislation, according to PBS. The problem, then, is that even if it passes the Senate — which is looking very likely, thanks to Paul's stated opinion — Trump is likely to use his very first veto rather than signing it. At that point, Congress would need a two-thirds majority to override the presidential veto — which, as PBS wrote, it is highly unlikely to reach in either the House or the Senate.

In the end, then, Congress' effort to block Trump's declaration of emergency is likely to fail at this stage. However, there are still numerous lawsuits pending against the declaration, so the president can't expect the funding for his wall will come through just yet.