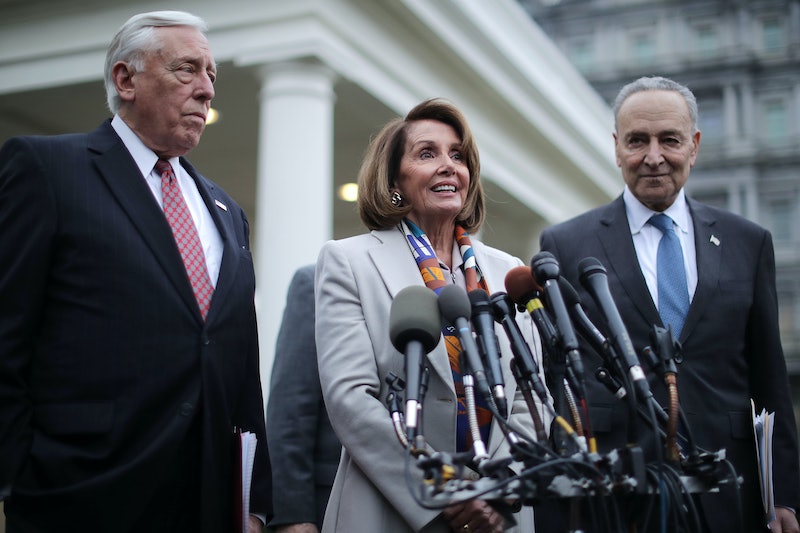 The government shutdown is entering its second week, and at a Friday meeting with Democratic negotiators, President Trump said that the shutdown could last "months or even years," Senate Majority Leader Chuck Schumer tells the Washington Post. The standoff may have you wondering: Can Democrats stop the government shutdown?

The answer is yes, they could. So could Trump, for that matter. But it's not likely to happen any time soon.

The structure of the budget impasse is rather straightforward. In order for the government to re-open, the House of Representatives, the Senate and Trump must all agree on a government funding bill. Specifically, this means that such a bill must be approved by a simple majority in the House, 60 senators (the minimum number needed to break a filibuster) and Trump himself.

Because Trump and Democrats' respective negotiating positions are mutually exclusive — and because both Congress and the White House have to approve any funding bill — the government will not open until either Democrats or Trump abandon their respective positions on border wall funding.

So, yes: Congressional Democrats could end the government shutdown by passing a funding bill that includes money for a U.S.-Mexico border wall (Although Trump had demanded $25 billion for a wall back in January 2018, he's now asking for just $5 billion in wall funding). Similarly, Trump could end the shutdown by agreeing to sign a bill that doesn't include any money for a wall.

Neither of those outcomes appear particularly likely, though. Democrats just scored an historic victory in the midterm elections, winning control of the House for the first time in a decade, and Democratic voters do not want a border wall. Just as important is the fact that, according to poll released Monday, voters are overwhelmingly blaming Trump for the shutdown, not congressional Democrats. As a result, Pelosi and Schumer have no incentive to authorize Trump's request for border wall funding.

Trump, for his part, launched his political career on the promise of building a U.S.-Mexico border wall. It's arguably the policy proposal about which his base cares the most — as evidenced by the immediate, vicious backlash that the president faced from some of his most die-hard supporters when the White House briefly suggested in December that maybe, a border wall wasn't all that important after all. It was that backlash that convinced him to reverse course and demand that any government funding bill include border wall funding.

Neither Trump nor Democrats want to alienate their core supporters, and so it's difficult to envision what would compel any of them to abandon their demands regarding border wall funding. Until one of them does, however, the government will remain shut down.