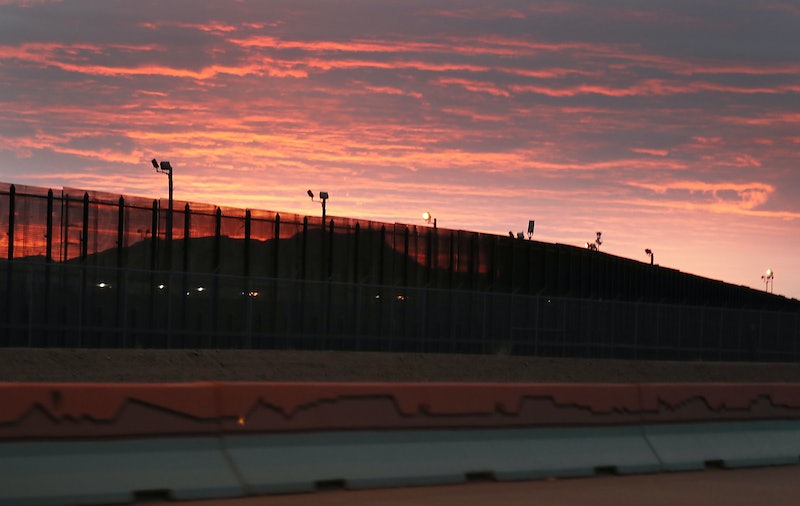 Even now that President Donald Trump has declared a national emergency in order to construct a wall along the United States' border with Mexico, it's still not entirely clear where the money to build the wall will come from. The biggest question lingering over the situation, though, is whether money for disaster can fund the border wall — and Senate Democrats have put forward legislation to make sure that that situation doesn't ever happen.

The bill is called the "Protecting Disaster Relief Funds Act," and Massachusetts Sen. Elizabeth Warren introduced it along with several other Democratic senators, including many of her competitors for the 2020 Democratic presidential nomination. Warren's statement on the bill, according to a press release, focused on what she saw as Trump's failure to respond to several natural disasters that have happened so far in his term:

The Trump Administration's response to the 2017 natural disasters, which devastated communities across the United States from California to Texas to Puerto Rico, was inhumane and continues to harm communities by delaying critical funding to help the recovery. Now President Trump is threatening to use disaster relief funds to pay for a useless campaign promise – absolutely not.

Among the senators sponsoring the bill, according to The Hill, are declared presidential candidates Sen. Kamala Harris and Sen. Kirsten Gillibrand, along with Sen. Bernie Sanders, who will likely announce his candidacy soon, according to Politico.

So far, the White House hasn't decided which funds to appropriate for the newly declared national emergency, but the $13 billion that Congress marked for disaster relief was under consideration at least at some point, according to the Associated Press. The story has shifted on that front, however. As of Friday morning when Trump declared the national emergency, the White House was saying that disaster relief funds would not be used to pay for the wall.

Mick Mulvaney, acting White House chief of staff, explicitly ruled out the possibility to reporters on Friday while listing out the pots of money that would be used to fund the wall, as NBC News reported.

"What's not on that list is taking away disaster relief money from places like Texas and Puerto Rico," Mulvaney said, according to NBC News.

Using disaster relief money to build the wall could also be a politically unpopular step, even among Republican politicians; Sen. John Cornyn of Texas, for example, told the AP that he and others "thought that would be a mistake."

“There’s limited pots of money he can get into, but I’m pretty confident he won’t get into disaster funds,” Cornyn said.

The fact remains, though, that it would be legal for Trump to use disaster relief funds to go towards the national emergency that he declared, even if his chief of staff said that he would not. After all, as of the end of 2018, Trump had made almost 8,000 false or misleading claims while in office, according to The Washington Post's Fact Checker. A promise from Trump, then, shouldn't necessarily be trusted. While this Democratic bill is unlikely to make it out of the Republican-controlled Senate, it would definitively close off the possibility of Trump using disaster relief funds for the wall.

More like this
Are John Legend & Kanye West Still Friends? The Singer’s Latest Update Is Candid
By Brad Witter
Rishi Sunak's Wife Is Worth More Than The Queen
By El Hunt
The 9 Best Exercises For Period Cramps
By Carolyn Steber
Christina Aguilera Took A Powerful Stand At Brighton Pride
By Sam Ramsden
Get Even More From Bustle — Sign Up For The Newsletter