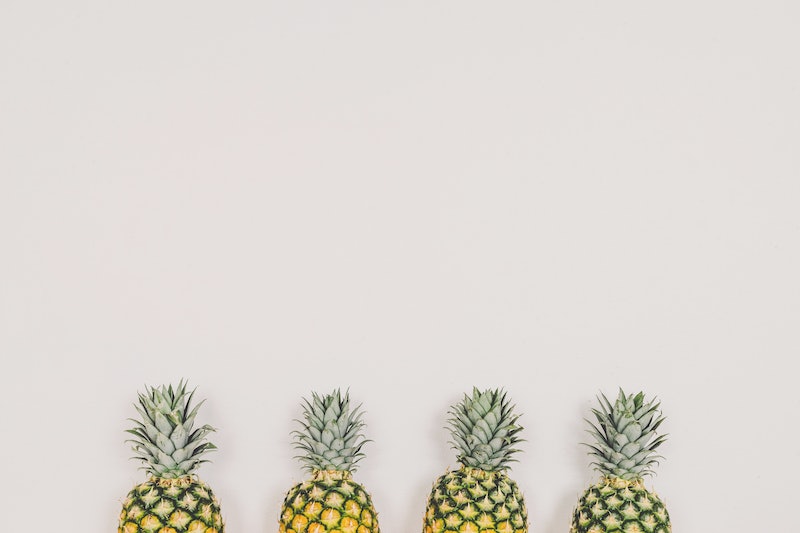 Around the same time we learn adults occasionally bury their heads in each other's crotches for pleasure, young girls are also taught that our vaginas are basically disgusting flesh swamps that require an enormous amount of maintenance, lest our partners take one look at them and pass out in horror. We are instructed to shear our muffs, stuff expensive rocks up our vaginas, and eat foods that will supposedly make our cum taste like dessert. One of the most common pieces of advice for achieving a scrumptious vag — proffered breathlessly in women's magazines, at happy hours, and in the back of crowded school buses — is to consume vast quantities of pineapple. But does pineapple actually change the smell and taste of your vagina?

Before we delve into this age-old question, a few notes. Most importantly, vaginas are meant to taste like vaginas. Anyone who would venture between your legs and then recoil and say: "Wait a minute, this doesn't taste at all like peach cobbler!" should be kicked out immediately, and probably offered some informative reading materials.

What is the taste of a vagina exactly? Although its differs for everyone based on their diet, sweat, and natural body secretions, according to MyVag.net, the baseline flavor profile for a healthy vagina is "not quite sour, but somewhat astringent, perhaps because the vagina is, after all, acidic." Mmm, astringent.

That being said, there's no shame in wanting to make oral sex as pleasant as possible for the person going down on you (though it should absolutely be a two-way-street, and you shouldn't be the only one expected to primp your genitals just because they happen to be innies.)

So, with those two points out of the way, back to pineapples. Despite the wealth of rumors out there, there's been no official scientific study on how different foods affect our vaginas.

Vegan and vegetarian diets have also been associated with pleasantly-flavored genitals, while, dairy, broccoli, asparagus, red meat, garlic, alcohol and smoking can all reportedly give your vagina a more sour taste.

So, will pineapple change the smell of your vagina? Maybe a little. But don't stress about the smell too much. After all of her intensive research with her boyfriend, Khona concluded: "I learned something very important from this experiment; force feeding yourself (or your partner) in the name of making your juices taste better is not worth it."

Munch on some pineapple if you feel like it, but besides that, when your partner begins to venture south, just sit back and enjoy the ride.

More like this
Young People Are Still Experiencing Period Poverty In UK Schools
By Sophie McEvoy
I Tried The $20 TikTok Viral Oishii Strawberries — Here's What I Thought
By Sophie Hanson
Trust Me, Pickle Martinis Are The New It Drink Of The Season
By Emma Carey
On TikTok, A ‘Snackle Box’ Is The Best Way To Pack Charcuterie On-The-Go
By Meguire Hennes
Get Even More From Bustle — Sign Up For The Newsletter