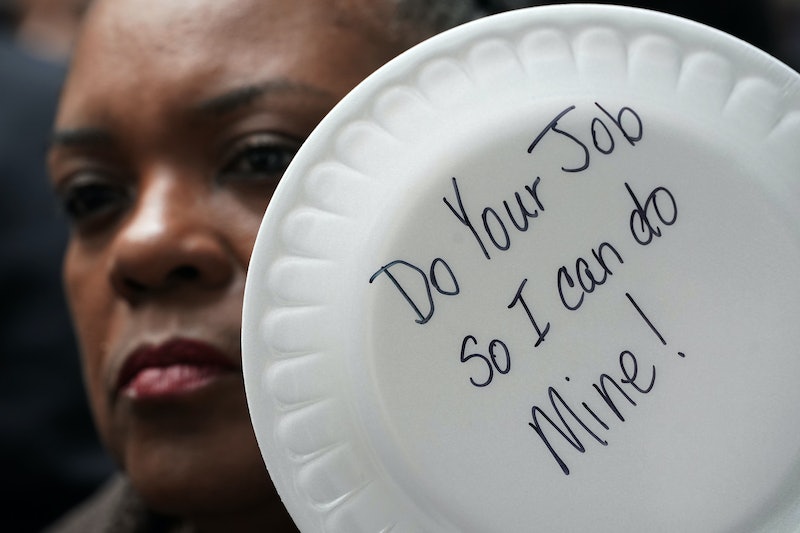 The government shutdown, which began at midnight on Dec. 22, 2018, is now the longest one America has ever experienced. And it's impacted over 800,000 federal workers who haven't received two paychecks so far, leading to circumstances where many don't know how they'll pay for food, gas, or medical coverage. But in a move defying federal guidelines, some states are allowing essential federal employees to collect unemployment, CNN reported on Wednesday.

According to Department of Labor guidelines, only furloughed government workers are allowed to apply for unemployment benefits. However, essential federal employees who are currently working without pay cannot do the same.

According to CNN, Colorado Gov. Jared Polis issued an emergency rule on Friday that allowed essential workers in the Centennial State to claim unemployment benefits during the shutdown. "Those federal employees who are required to report for work are feeling the same economic squeeze as those who have been furloughed," Polis said in a statement. "They should not be denied the immediate financial assistance provided by unemployment benefits while being mandated to show up to work."

It's possible that many government workers may not even know about the eligibility guidelines around making unemployment claims. Debra D'Agostino, who co-founded the Federal Practice Group, an organization that deals with government employment problems, told WTOP on Monday, "Through one of those bizarre quirks, those folks who actually are working who are not getting paid are not entitled to unemployment."

And if you're a furloughed or essential worker who's seeking to apply for unemployment benefits, it's worth keeping in mind that the issued money has to be returned once you receive your regular paycheck. Think of it as a loan. "Once back pay is issued to these furloughed federal employees," D'Agostino told WTOP, "then the unemployment compensation has to be paid back. It’s something to consider."

The situation is distressing for many across the country. Politico reported that the Labor Department stated, as of Jan. 12, over 25,000 government workers had applied for unemployment benefits, as they went without pay for the first time during the shutdown. That number is more than double the 10,500 figure the department reported in the week before.

While the aforementioned states have taken steps to ensure both furloughed and essential workers are somewhat cared for, things aren't so positive in places like Texas. According to The Dallas Morning News on Wednesday, the Texas Workforce Commission stated that nearly 6,400 furloughed government employees in the state had applied for unemployment but only 600 had so far collected payments.

In a statement to The Dallas Morning News, Texas Workforce Commission's spokeswoman, Lisa Givens, likened the avalanche of calls and applications her agency received since the shutdown began to a scenario where "natural disasters" left people temporarily unemployed.

As Donald Trump doubles down on his demand for $5.7 billion in a federal spending bill for his U.S.-Mexico border wall, many Americans have expressed concern about the duration of the shutdown. But with some of the states in the country pushing against federal guidelines, government workers may just feel a small — albeit short-term — degree of relief.