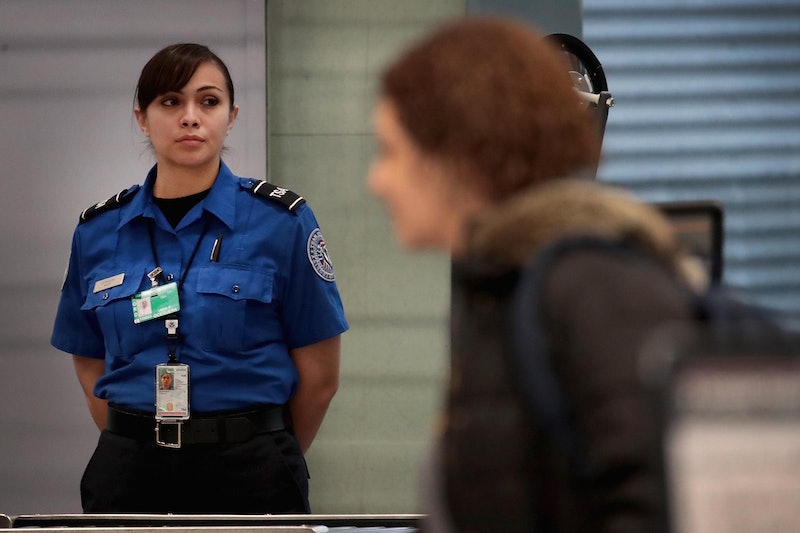 There is likely no one actively benefitting from the ongoing partial government shutdown, but the people feeling it most keenly are the 800,000 federal employees who aren't getting paid. 420,000 of these employees are deemed "essential," meaning that they still have to come into work, even though they won't receive their normal paychecks because of it. The question has arisen, then, of whether these essential federal workers could strike to end the shutdown — but the answer isn't entirely clear.

“People will start to get eviction notices from apartment complexes, late fees on most bills,” said a Democratic lawmaker who raised the idea, according to the Washington Post. In a tough situation like that, could the workers themselves actually take the shutdown into their own hands? As the Post put it, perhaps air traffic controllers or TSA employees could force Trump's hand by striking and essentially grounding all air traffic.

While there's no news of an actual strike in the works, a PR official for TSA tweeted out a telling statistic about the agency's rate of unplanned absences.

"This morning, TSA experienced a national rate of 7.7 percent unscheduled absences compared to a 3.2 percent rate one year ago, Sunday, January 14, 2018," he tweeted on Sunday, adding that the agency was still upholding its safety standards.

After all, if the nation's air traffic controllers or airport security officers just walked out of the job all at once, the outrage from those inconvenienced could be enough to bring about a compromise, which both President Donald Trump and Congress have been reluctant to come to so far, as CNBC wrote.

There's just one little fly in the ointment — federal employees aren't allowed to strike.The Atlantic explained this is thanks to the Taft-Hartley Act of 1947, which was originally passed to stop federal workers from using a strike that would hobble government operations to ask for increased wages, for example, or better working conditions. As The Atlantic wrote, though, those discussing the legislation likely never saw a situation in which the government would essentially be forcing federal workers into this “involuntary servitude," as the president of the Federal Bureau of Prisons union described it to The Atlantic.

And if the shutdown does go on for "months or even years," as Trump threatened earlier in January, the thousands of federal employees left without their monthly paychecks could have no choice but to either leave their jobs — or do something themselves to help end the shutdown. As a New York Times opinion piece argued, the shutdown could actually force federal employees to take a powerful stand for public-sector labor.

Strikes by federal employees have turned out badly for the workers in the past, though. In 1981, for example, President Ronald Reagan fired more than 11,000 striking air traffic controllers who wanted better pay and shorter workweeks. Those employees were still bringing in a paycheck, however, whereas this shutdown is forcing current federal employees to work without pay — and without even the promise of backpay later. This is already the longest shutdown in U.S. history — so perhaps something unprecedented could stop it.