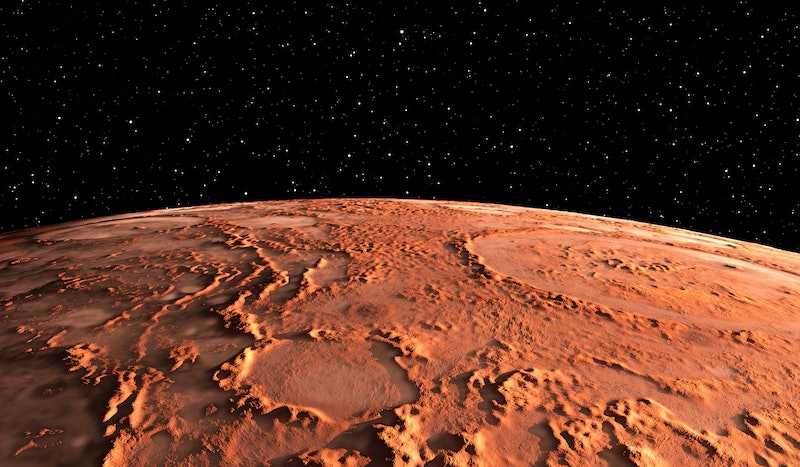 Hold onto your earthbound buns because scientists may have just found a way to make Mars habitable, according to a new study. The key? A material called silica aerogel.

Researchers from Harvard University, NASA’s Jet Propulsion Lab, and the University of Edinburgh published their results earlier this week in the scientific journal Nature Astronomy. Basically, scientists asked whether there was an earthly material that we could bring to Mars that would mimic Earth’s atmosphere. “Mars is the most habitable planet in our Solar System besides Earth,” Laura Kerber, Research Scientist at NASA's Jet Propulsion Laboratory, said in a press release. “But it remains a hostile world for many kinds of life. A system for creating small islands of habitability would allow us to transform Mars in a controlled and scalable way.” Due to lack of oxygen, little water, no atmosphere, and extreme cold, humans are not equipped to live on the red planet.

However, researchers wondered if there was a way to create a greenhouse effect, in turn making the planet more Earthlike. “We started thinking about this solid-state greenhouse effect and how it could be invoked for creating habitable environments on Mars in the future,” Robin Wordsworth, Assistant Professor of Environmental Science and Engineering at the Harvard John A. Paulson School of Engineering and Applied Sciences and the Department of Earth and Planetary Science, said in the press release. “We started thinking about what kind of materials could minimize thermal conductivity but still transmit as much light as possible.”

One such material is silica aerogel.

So, what is silica aerogel? For starters, it’s one of the most insulating materials ever created. Silica aerogels are extremely porous, 97 percent porous, in fact. This means light can move through it, but it still blocks harmful ultraviolet radiation. Silica aerogel, in theory, could transmit enough light for photosynthesis while permanently raising temperatures above water’s melting point. And it could do all of this without any internal heat source.

"Silica aerogel is a promising material because its effect is passive," said Kerber. “It wouldn't require large amounts of energy or maintenance of moving parts to keep an area warm over long periods of time.” In their study, researchers were able to demonstrate that a thin layer of silica aerogel increased Mars-like surfaces to Earth-like temperatures. Put simply, the material mimicked Earth’s atmosphere.

“Spread across a large enough area, you wouldn't need any other technology or physics, you would just need a layer of this stuff on the surface and underneath you would have permanent liquid water,” said Wordsworth.

In May, YouTube Channel Veritasium published a video on the “World’s Lightest Solid.” That solid? Aerogel. The kind of aerogels shown in the video look like the lovechild of a cloud and a cube of Jello. It’s extremely delicate while being extremely powerful, having the ability to deflect enough to keep a chocolate bunny intact while placed above a bunsen burner.

This new research comes from a long line of scientists questioning whether Mars could be habitable. In 1971, Carl Sagan proposed the idea of terraforming, making the planet resemble Earth in order to sustain human life. In 2018, two NASA-funded researchers from the University of Colorado, Boulder and Northern Arizona University found that processing all the readily-available resources on Mars would only increase the atmospheric pressure to about 7 percent of what it is Earth. In other words, working with Mars’ existing water and greenhouse gases likely wouldn’t be able to create a liveable atmosphere for humans.

However, the new study took a different approach. “This regional approach to making Mars habitable is much more achievable than global atmospheric modification,” said Wordsworth, “Unlike the previous ideas to make Mars habitable, this is something that can be developed and tested systematically with materials and technology we already have.”

This latest research poses a lot of new possibilities as well as new moral quandaries. “There’s a whole host of fascinating engineering questions that emerge from this,” as Wordsworth put it. “If you're going to enable life on the Martian surface, are you sure that there’s not life there already? If there is, how do we navigate that?” Those aren’t the only moral questions terraforming Mars invokes.

As Bill Nye said in a 2018 interview with USA Today, “We can't even take care of this planet where we live, and we're perfectly suited for it, let alone another planet.” This new research leaves us with some exciting answers and even more complicated questions.

More like this
Kim Kardashian Is Releasing A Line Of Earbuds With Beats
By Alexis Morillo
How To Remove A Sound On TikTok
By Emma Carey
Hinge's New NFAQ Feature Is Demystifying Queer Dating
By Emma Carey
What Does POV Mean On TikTok? The Popular Acronym, Explained
By Emma Carey
Get Even More From Bustle — Sign Up For The Newsletter