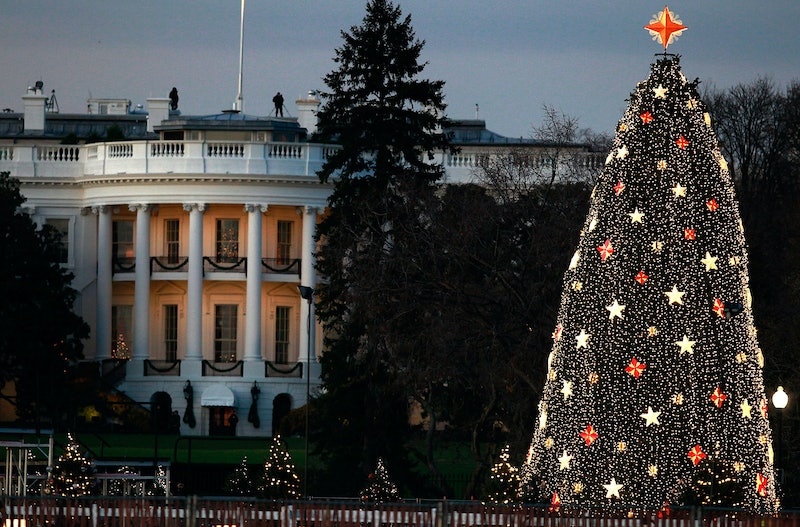 On Thursday, for the 95th year in a row, the first family will host the annual National Christmas Tree lighting on the Ellipse at President's Park at The White House. The ceremony will begin at 4:30 p.m. EST and streets will begin to close around noon. But fortunately, even if you can't make it to the live event, you can still experience the Christmas cheer from the comfort of your own couch (or cubicle). You can check Twitter for any livestreams that may be happening, and catch the entire ceremony exclusively on the Hallmark Channel on Monday, Dec. 4 at 7 p.m. EST.

The National Christmas Tree Lighting is one of America’s oldest holiday traditions, beginning in 1923 with President Calvin Coolidge. Every year, the first family upholds the tradition, and there are live performances throughout the night. This year, Today host Kathy Lee Gifford and Superman actor Dean Cain will host the event, with performances by The Beach Boys, Craig Campbell, and the Texas Tenors, among others. The U.S. Navy band will also play a set. Other acts include country singer Wynonna, Boys II Bow Ties, Jack Wagner, Steve Gibson, and Us The Duo.

While there doesn't seem to be a theme this year, organizers allow you to look back on the past 95 years of this tradition on its site. This includes the lighting ceremony after the late President John F. Kennedy was shot and killed. It was postponed until the thirty-day mourning period for the country was over. “Today we come to the end of a season of great national sorrow, and to the beginning of the season of great, eternal joy," President Lyndon Johnson, accompanied by First Lady Lady Bird Johnson and daughter Luci, said at the time. He added that he didn't want the nation to "lose the closeness and the sense of sharing and the spirit of mercy and compassion, which these last few days have brought to us all.”

In 1978, a 40-foot Colorado blue spruce was brought from York, Pennsylvania to the Ellipse, where it stands today. Before that, in 1954, 56 smaller trees, that make up the "Pathway to Peace," were planted surrounding the National Christmas Tree, representing all 50 states, five territories, and the District of Columbia. A lot has changed over the decades, including the tree becoming more energy-efficient with LED lights in 2008, according to the National Christmas Tree Lighting site.

While there isn't always a theme, the ceremony in 2015 helped kick off the National Park Service Centennial in 2016. Trimmed with sparkling gold ribbon and white stars and bright lights, the tree paid tribute to the occasion. At the lighting ceremony, former President Barack Obama and others took to the stage to share their own personal connection to national parks. There's been no announcement about what Trump or First Lady Melania will address at this year's event.

If you happen to be lucky enough to attend this year's lighting ceremony in person, the site recommends people take the metro to get there, as the event will affect bus routes throughout the city, including Metrobus, DC Circulator, and Maryland and Virginia commuter buses. If you can't wait to get your fix of Christmas tree lighting, check out the Rockefeller tree lighting ceremony that took place Wednesday, Nov. 29, where Gwen Stefani and country singer Jennifer Nettles performed.