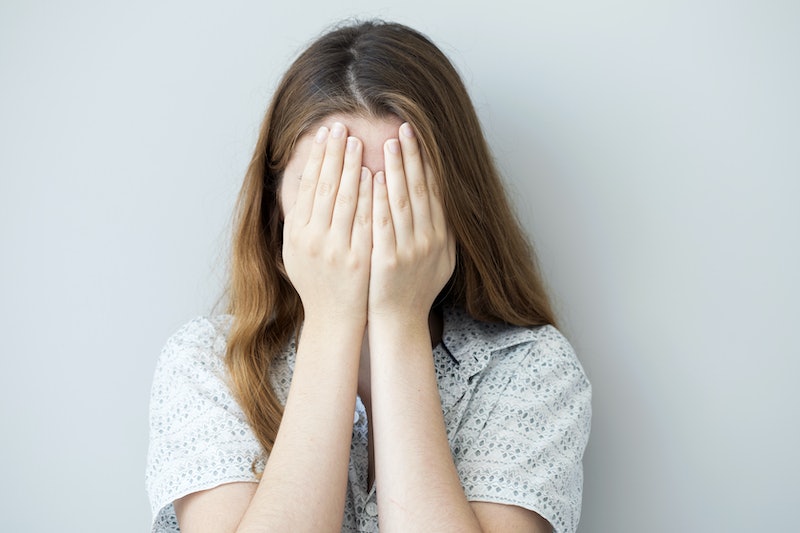 When Jessica Pan, a self-described "shintrovert" or shy introvert, first read a study that found people are happier when they talk to strangers, she made it her mission to try to be more open with people — and thus, her new book, Sorry I’m Late, I Didn’t Want to Come, was born. In it, Pan reckons with her introverted nature by living as an extrovert for an entire year.

"I’ve always had these two competing parts of my personality — where I read a lot alone and daydreamed a lot and, in these dreams, I want to live a big, full life of adventures," Pan tells Bustle. "But then naturally I’m quite shy and introverted, so I’m often scared to take the action to do these things."

Though she had taken major leaps of faith in her past, in her 30s, Pan felt stagnated. After living in London for a few years, she left her job and started freelancing in the city. Several close friends moved away, and she found it difficult to forge new connections. She had always embraced her introversion, but she realized her people-avoidant tendencies might also be limiting her quality of life. So she committed to living as an extrovert for a year: She signed up for apps to make friends, attended networking events, performed at the storytelling event The Moth, and tried stand-up comedy for the first time, among other endeavors.

"I did it, I cringed and I survived," Pan says. "That social anxiety has melted away, which I never thought would happen."

She tells Bustle that her first challenge — talking to strangers on her commute — was one of the most difficult, despite its simplicity. "Maybe it’s because I’m an American living in London and Londoners really, really don’t talk to each other on public transport," she says. "They are great at avoiding eye contact and pretending no one else is around."

A psychologist she consults with assures her that social anxiety is totally normal and recommends that she confront it directly by intentionally putting herself in a humiliating situation, if only to realize that nothing terrible will happen. Pan took this advice to heart, and began asking strangers on the street whether or not England has a queen. "I did it, I cringed and I survived," Pan says. "That social anxiety has melted away, which I never thought would happen."

Some of the challenges — like taking an improv class — came more easily to her. "I hate public speaking and performing and being put on the spot, and strangers make me nervous — and improv combined all of those things," she says. "But after one class, I fell so hard for it. It was so fun to be creative and mistakes were always so easily forgiven. When you’re 'playing' with 14 other people and they’re so funny and everything is moving at a fast pace, you forget all of your worries because you have to stay in the moment. You can’t stress about work or health or your love life when you’re in a scene and creating on the spot."

She doesn't work through these challenges alone. Throughout the book, she recounts her experiences with experts, who consulted her and guided her on her journey. She tells me one of the most helpful concepts she learned from one of these experts was the importance of having "Deep Talk" about death, grief, love, and other "big topics" rather than just surface conversations about traffic or the weather. "I really liked that lesson — that to make deeper connections, we need to take the plunge and go for Deep Talk. We can’t always stay shallow," she says.

Pan, who is an introvert and socially anxious, says she was 24 when she first learned about introversion from a co-worker. "When she explained the concept to me – that introverts get their energy from being alone, that they like solitude, that being with people all day tires them out, that they value a few close friendships over a large circle of friends, I immediately felt understood and relieved," she says.

Definitions of introversion vary, but it is commonly understood that introverts find themselves drained by interactions with people while extroverts are energized by them. In the book Quiet: The Power of Introverts in a World that Won’t Stop Talking, Susan Cain writes that an estimated one third to one half of Americans identify as introverts.

"It was thrilling; it’s incredible to do something that you never ever thought would be possible for yourself."

While she doesn't think all introverts need to push themselves to act as extroverts, it was a beneficial exercise for her, because "having the ability to morph, to change, to try on free traits, to expand or contract at will, offers me an incredible feeling of freedom and a source of hope," she writes in the book.

The climax of the book comes when Pan conquers her personal "Everest": A stand-up comedy performance. "I took a beginner’s comedy course and I really bonded with the women in that class," she says. "We all helped each other with our material and our nerves, and we all got up on stage to perform, then we took a trip to Scotland to perform at the Edinburgh Fringe Festival. It was thrilling; it’s incredible to do something that you never ever thought would be possible for yourself. I was amazed to feel like my definition of myself was expanding."

In the Hollywood version of the story, Pan would probably try comedy once, discover a hidden talent, and start headlining sold-out arenas. In the real-life version, Pan performed decently at her first show, but then had a less-than-successful second attempt. Although Pan developed more confidence and learned new strategies for dealing with situations that previously scared her, she knows she still has limitations. And that's OK, because she learned to separate her life into things she doesn't want to do and things she doesn't want because she's too scared.

"I’m still an introvert — I don’t think you can fundamentally change that — but I feel more confident. I have less social anxiety,” she says. "I definitely do not say yes to everything, and of course some events are going to be bad and you’re going to meet people you don’t click with. But I’m more open to new experiences, and even though I’ll always hate public speaking, I know that I can do it when I need to. Before I had put this ceiling on my own career by saying no to speaking opportunities... [or] podcasts or teaching classes. Now I say yes to these things. I’m no longer owned by my fear."