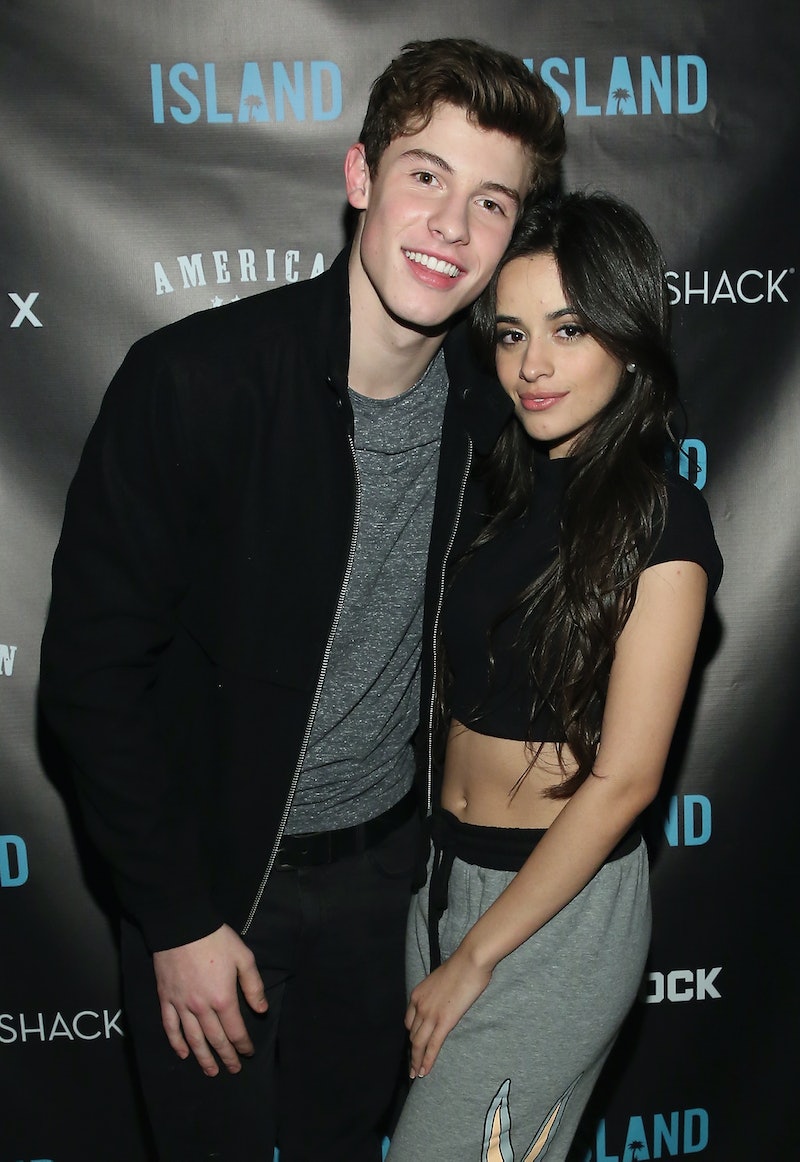 Have you noticed how many celebs are jumping from one relationship to the next these days? First, it was Justin Bieber, who proposed to Hailey Baldwin just a couple months after putting his Jelena romance to bed for good. Next, it was Ariana Grande, who was engaged to Pete Davidson the month after splitting from long-term love Mac Miller. Lest we forget Cara Delevingne, who was apparently linked to Paris Jackson just before her and Ashley Benson hit it off last year. Now, Camila Cabello is smooching “Señorita” video co-star Shawn Mendes just weeks after her breakup with Matthew Hussey.

Maybe something’s in the air. I’m normally a “processor,” who takes months to get over an ex. About this time last year, feeling the need to speed up my Breakup Recovery Program, I met a friend-of-friend just weeks after I ended my relationship, and decided to dive into dating while I was still licking my wounds.

It was a fast-and-furious month; we hung out seven or eight times. A lot of wine and was involved, but absolutely zero contact in between dates. It fizzled as soon as one of our dates triggered a flood of memories about my ex, and I realized I was still in love with him. I also recognized that I hadn’t done enough work on myself and my feelings to jump into something new.

It can be easy to jump right into another relationship post-split, to fill time or as a means of distraction, but here’s what experts say actually needs to happen in order to have a successful relationship jump.

I didn’t have a couple crucial elements of a successful breakup to make relationship-jumping a viable route for me. “It’s really important for a person to have closure, and a healthy understanding of what happened in the relationship,” Rebekah Montgomery, PhD, a clinical psychologist in private practice in Washington, D.C., tells Bustle. “You should have a balanced perspective of why things didn’t work out, as well as one that incorporates new information you have learned about yourself.”

I did not have that. When I ended my relationship, it was with the understanding that we might reconnect in the future when he moved back to the Midwest from the Bay Area. He ultimately did; we got back together, and I never really let go. Leaving that sliver of “maybe” did not put me in a position to properly date. “There is significant pain in what I call ‘breaking your own heart,’" Montgomery says. ‘If you love someone still, but know you have to end the relationship, being the dumper can be particularly painful,” with a lot of loose ends and roller-coaster feelings.

To jump into a new relationship, you need the earnest desire to leave, the wherewithal to actually walk away, and the will to start something new.

Karla Ivankovich, PhD, a clinical counselor at OnePatient Global Health, tells Bustle to jump into a new relationship, you need the earnest desire to leave, the wherewithal to actually walk away, and the will to start something new. “You need to have resolve,” she says. “Whether this means you have processed an emotional breakup, or because it was just time to go, you know what you want.”

Resolve is something Lola, 24, a model and business owner from South Florida had in spades. After years waiting for her ex-boyfriend to get his life in order, one too many letdowns led her to set an internal timeline for her departure. “I gave him a deadline to prove to me why I should stay with him,” she says. “Time passed and he, no surprise, didn’t meet my deadline. So on February 28, 2014, he no longer existed [to me].”

Lola already knew her now-boyfriend through work, whom she immediately “took up on his offer” to date, and she’s been happily coupled with him for five years. Since she’d had a long time to think about leaving, and plan for it, she might have been better-equipped to jump into her next relationship and actually invest in it wholeheartedly. “A significant amount of mourning can occur during a relationship,” Montgomery says. “The person who has been contemplating ending the relationship is likely to have had more time to process letting go than the dumpee.”

Acceptance Prevents You From Transferring Baggage

“Processing” is indeed crucial, whether you do that in your old relationship, in your new relationship, or on your own. If you don’t process, you’re setting the new relationship up to fail. “The greatest challenge [of a relationship-jump] is that you’re more likely to carry baggage with you into the new relationship, because you haven’t had time to think about what did or didn’t work. In doing so, you end up with issues of transference — when you start seeing similar traits in the new partner.”

So, before you get in too deep, take some time to accept what happened. “The primary goal is not to hold the problems from your previous relationship against a new partner,” Montgomery says. “You need time to process your emotions; you have a right to your feelings — hurt, anger, disappointment, rejection. You want to process those emotions so that you don’t feel them as strongly. You don’t want to be primed to feel them as soon as something negative happens in your new relationship.”

There are good reasons to be single after a breakup — as Ariana has found out, for one. “For some, going from relationship to relationship never allows them to truly be comfortable being alone, or to know and love themselves as individuals," Montgomery says. “You can carry a lot of emotional stuff with you, and new relationships just keep distracting you from really working through your emotions.”

Some people need to be single to reacquaint their minds with their truest self — especially if you are a chronic relationship-jumper. So, break up. Practice self-care. Write. Read. Reflect. Get a facial. Get a hobby. Build the tightest friendships you can. See as many places as you can. Get deeply in touch with yourself. “Mostly, know what makes you happy and what doesn’t, and determine how you meet your own needs,” Ivankovich says. “This way, the next go round, when someone makes you happy, it’s icing on the cake as opposed to something you needed another person to give you.”

If you’re not the type to jump, but you want to give it a try and you feel potential... whether it works or not may “boil down to someone’s personality,” Ivankovich says. “Some people simply prefer to experiment.”

A Leap Of Faith Can Go A Long Way

Montgomery says she sees some people in her practice moving way too freaking fast, but there’s a flip side to that narrative.

It is possible to process with someone new. Maybe it’s the trigger to finally understand why the relationship had to end.

“I’ve also seen people never giving love a chance again after heartbreak,” she says. “This can lead to years of missed opportunities for connection, and make getting back on the horse even scarier.” It is possible to process with someone new. Maybe it’s the trigger to finally understand why the relationship had to end.

Sometimes you have to take a leap of faith, ready or not. Aleka, 33, a math teacher and food blogger living in New Jersey, was shocked and heartbroken when her partner of 14 years wanted to break up, or “make sure” she was “The One” before committing. She was 27 at the time. “I was so taken aback, thinking we would be getting married at that point,” she tells Bustle. But Aleka also swore that if he was moving on, she would find someone even better; she was introduced to someone new within a matter of weeks. “I soon realized that dating someone new after 14 years of dating the same guy was exactly what I needed,” she says. “He kept me preoccupied. He was completely different from my ex; I literally would smile when I woke up every morning.”

Aleka says the happiness she “experienced everyday with this new guy” kept her from even considering a reconciliation; she took a chance on that positivity, and slid into a monogamous relationship just one month. “One and a half years later, we got married,” she says. “I could not be more thankful to my ex for making that insanely difficult decision for me.”

Montgomery says that whether you choose to jump into something new or stay single post-breakup, “if your actions are about avoidance or fear” — running away from your uncomfortable feelings, fear of another painful split, fear of confronting your real self — it will only hurt you more in the end.

So, make a bold choice based in growth, potential and opportunity, not avoidance. My fingers are crossed for Camila and Shawn.

More like this
10 Ways To Be More Empathetic To Your Partner
By Raven Ishak and Lexi Inks
How To Politely Reject Someone Who Keeps Asking You Out
By Laken Howard and Lexi Inks
Are Quality Time & Gift-Receiving Love Languages Compatible?
By Lexi Inks
20 Women Reveal Exactly How Long It Took Them To Get Over Their Ex
By Amanda Chatel and Lexi Inks
Get Even More From Bustle — Sign Up For The Newsletter