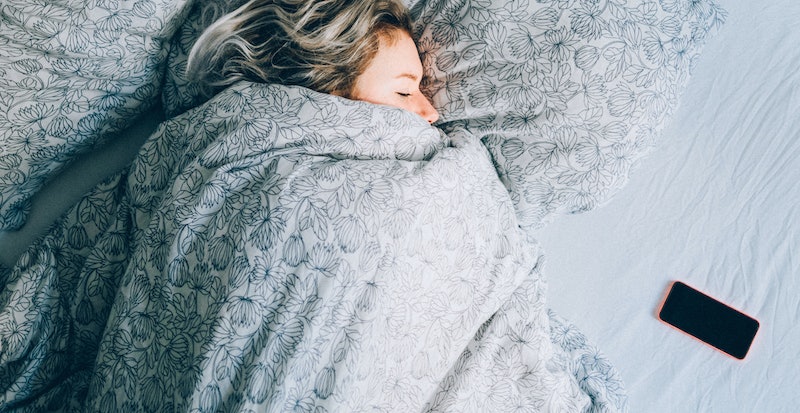 If you're in the habit of drifting off to sleep while listening to your favourite podcast or Youtube series, some science suggests that the voices you're hearing might influence your dreams. In fact, podcasts and human voices could affect your sleeping brain in a specific way. It turns out that we still hear and interpret speech while we sleep — even though we're not consciously aware of it. "If listening to verbal content is your bedtime habit, you might need pay some attention to what you're choosing," Dr. Deirdre Barrett Ph.D., assistant professor of psychology at Harvard University in the U.S. and author of The Committee of Sleep, tells Bustle. "It probably will colour your nocturnal adventures."

What type of noise does the brain tune in to while we sleep?

The human brain pays a lot of attention to the world around it, even when it's sleeping. Environmental noise can have a big impact on your sleep quality, as you'll know if you've ever had the sound of traffic or shouting people outside your bedroom window. However, all sounds aren't created equal. According to scientists, podcasts are more likely to influence your brain activity and dreams than, say, random hooting noises, because of the way the brain works.

"If there is one thing that cognitive sciences have shown time and time again, it's that our brains are tuned to process meaning," Dr. Thomas Andrillon Ph.D., a research fellow at Monash University in Australia, who's done extensive research on noise and sleep, explains. When we're awake, we automatically tune in to speech we recognise instead of random jumbles of sound. Andrillon's research, published in Nature Human Behaviour in 2019, showed that this applies when we're sleeping, too. Our sleeping brain activity mirrors what we're hearing, whether it's nonsense or meaningful speech — but if it's presented with a choice between intelligible dialogue or gibberish, it will pay attention to the speech it understands. And that can filter into our dreams.

Why doesn't our brain switch off completely?

This is likely down to evolution. "From a survival standpoint, we wouldn’t want to be awakened by every slight stimulus, but we also can’t afford to sleep through major ones that could signal imminent danger," Barrett says. Researchers have found that our brains remain sensitive to stimuli while we're sleeping, listening out for anything relevant. That includes speech; a study published in Frontiers in Behavioral Neuroscience in 2014, for example, found that brain activity in sleeping babies responded to angry voices, and the same brain activity has also been found in adults. If there are people around us who sound threatening or afraid, it stands to reason that our brains are primed to wake us up to run or defend ourselves. We're not aware of all sounds at all times, though. Andrillon explains that there are some "windows of wakefulness" during sleep, where we're more aware of external noises, but during deeper periods of sleep the brain blocks everything out.

How do external sounds play out in our dreams?

Podcasts may well be partially tuned in to during sleep — but it's not clear whether they could affect your dreams. "There is a bit of a debate in the scientific community about this," Andrillon says. Some scientists say external noises don't affect dreams at all, unless they wake you up. Others argue that it depends on the type of noise, and the stage of sleep you're in. "In the first minutes of sleep, incorporation of external events into dream-like experiences seem much more frequent," he says. So if you're listening to podcasts as you enter the initial, light stages of sleep, your dreams may be more likely to reflect elements of what you're hearing.

Barrett argues that words can definitely influence your dreams, but in unpredictable ways. "One study repeated proper names to sleepers," she says. "Some subjects dreamed of a person they knew with the name. Others incorporated the particular name as a word, and yet others dreamed more metaphoric links to the name." One of the key factors, she says, seems to be a personal link: words and topics that remind you of something may be more likely to appear in your dreams.

Dream studies are difficult, though; scientists have to rely on participants remembering their dreams, which isn't always guaranteed. "More research is needed to better understand the mechanisms of incorporation of external stimuli into dreams," Andrillon says. However, if you're in the habit of listening to emotionally charged, dramatic or particularly resonant podcasts before you go to sleep, be warned: they might stay with you until morning.