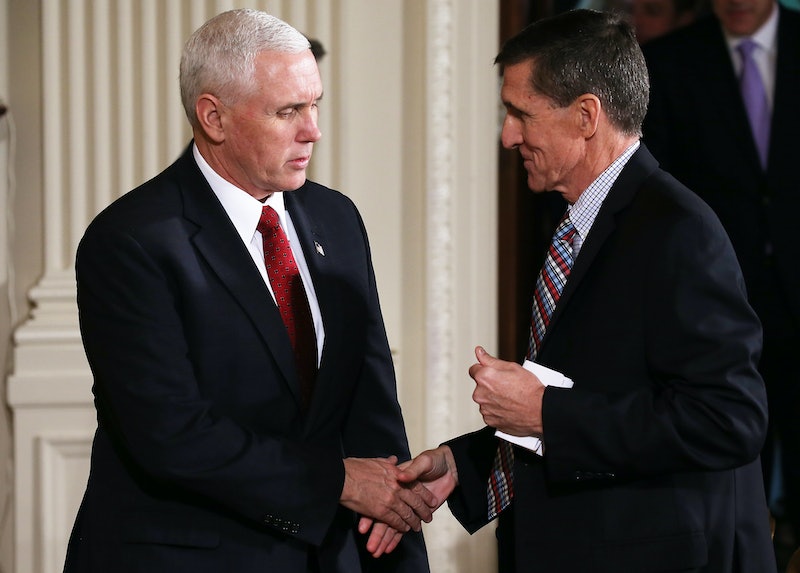 The controversy surrounding Michael Flynn's resignation is far from over. While it is ultimately dependent on Congressional Republicans, there could be widespread investigations into who knew what about Flynn within the White House. We already knew President Donald Trump knew about Flynn's phone call with the Russian ambassador for weeks. If an investigation goes forward and more information is discovered, there's a small chance Donald Trump could be impeached. Then what, can Mike Pence be impeached too? Flynn's scandal could be the first domino.

First of all, it's critical to say that there's no evidence that Pence did anything wrong with regards to Flynn's phone call with the Russian ambassador.Apparently, Pence was not told about the fact that Flynn discussed President Obama's sanctions on Russia with the country's ambassadors before reporters from The Washington Post looked into the matter. So, when he defended Flynn, he was under the impression that Flynn hadn't, in fact, talked about Obama's sanctions.

But if Trump were impeached for some reason, the game changes (and there are arguably quite a few reasons the president could be impeached at this point including the hefty business conflicts of interest that still have not been sorted out). If Trump is impeached, that puts Pence in the driver's seat and he could face new scrutiny.

Of course, even if Trump weren't impeached, Pence could be. The same rules apply with Pence as they do with Trump. It's in the Constitution, Article II, Section 4:

The President, Vice President, and all civil Officers of the United States, shall be removed from Office on Impeachment for, and Conviction of, Treason, Bribery, or other high Crimes and Misdemeanors.

The question here then is what constitutes a "high crime and misdemeanor." This is not just old school lingo for "felony and misdemeanor." Actually it has another meaning. Things that can be included are failures such as "as perjury of oath, refusal to obey orders, abuse of authority, dereliction of duty, failure to supervise, moral turpitude, and conduct unbecoming." That's a wide range, but there's not evidence that any of that applies to Pence.

The House of Representatives would have to vote to impeach (or indict essentially) and then the Senate with a two-thirds majority would have to convict Pence for him to be ousted. That's all highly unlikely while the GOP controls Congress.

Another thing to keep in mind is that the order of succession of the president still applies. So it wouldn't make sense to impeach Pence with Trump in office, because Trump could appoint a new vice president who could very well be worse on issues that Democrats care about the most.

So, yes, Pence can be impeached, but it's likely not happening soon. And it wouldn't even really make sense until (or if) the Dems win back the House.