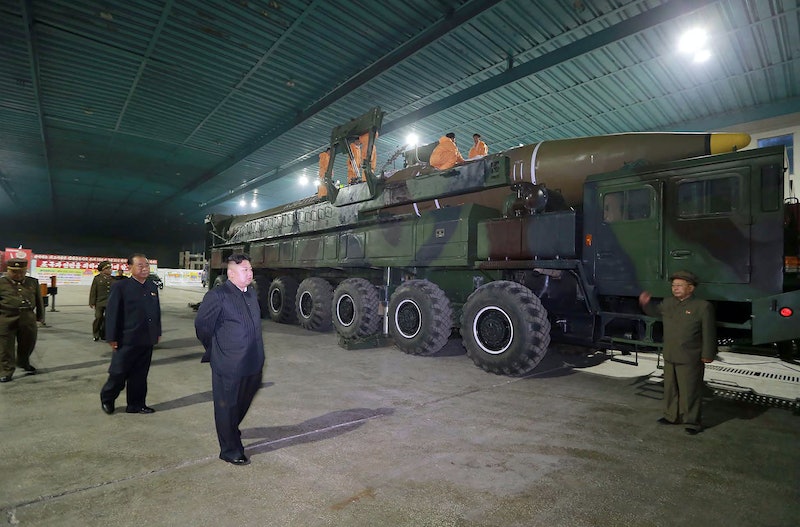 North Korea came up again on Saturday night when President Trump gave an interview to the former Arkansas governor, now turned talk show host, Mike Huckabee on Trinity Broadcasting Network. He told the one-time Republican presidential candidate that North Korea's nuclear weapons programs "should have been handled 25 years ago." Trump also sent out a few tweets Saturday pointing to their being just "one thing" left to deal with the country, a seeming endorsement of a military option — even though North Korea has vowed counterattacks. There's even the chance North Korean missiles could reach the United States.

Just last week two Russian lawmakers who visited North Korea said that the country is preparing another missile test, and its range could put in striking distance of the United States, the pair told Bloomberg. "They told us that they’re preparing to test more powerful long-range missile that, in their view, would be able to hit the West Coast of the U.S.," Anton Morozov, who is a member of Russian parliament and on the international affairs committee told the news service.

"As far as we understand, they intend to launch one more long-range missile in the near future. And in general, their mood is rather belligerent," Morozov told the Russian news agency RIA. "They did everything to show they’re seriously ready for confrontation," he added.

Their comments on the country's nuclear program underline how serious President Trump's recent tweets and interview are if they raise tensions with Kim Jong-un. On Saturday Trump posted to Twitter, "Presidents and their administrations have been talking to North Korea for 25 years, agreements made and massive amounts of money paid hasn't worked, agreements violated before the ink was dry, makings fools of U.S. negotiators. Sorry, but only one thing will work!" A military option would be much more palatable if the country couldn't target large American cities in response.

The Russian lawmakers' comments do fit with what scientists have been saying since at least the summer. North Korea launched a number of intercontinental ballistic missile tests in to the Pacific Ocean. At the time, experts who studied the trajectory of the missiles said that if they were aimed differently, they could reach much of the mainland United States. Essentially, they would need to be shot more horizontally, as opposed to vertically to extend their range.

The one thing that remains unclear is how far the missiles could go with a heavy payload onboard. A nuclear attack would require that the missile carry a nuclear bomb, or the payload. The more basic ones that North Korea is thought to have weigh quite a bit, limiting the range of their rockets. If they have a miniaturized version, they could go much farther.

The odds are that North Korea would first consider closer targets. Alaska and Hawaii are both within reach of some of Pyongyang's earlier missiles, but it's likely Guam who would come under fire — even if it's just tests for the North to show its military might. Back in late August, the North said that it would be testing a missile in the waters around Guam. That threat never came to fruition. Guam is a U.S. territory.

Trump is far from the first president to find himself stuck with North Korea's intransigence. But, given the North's new military might in the form of these missiles, every word must be now chosen very carefully.