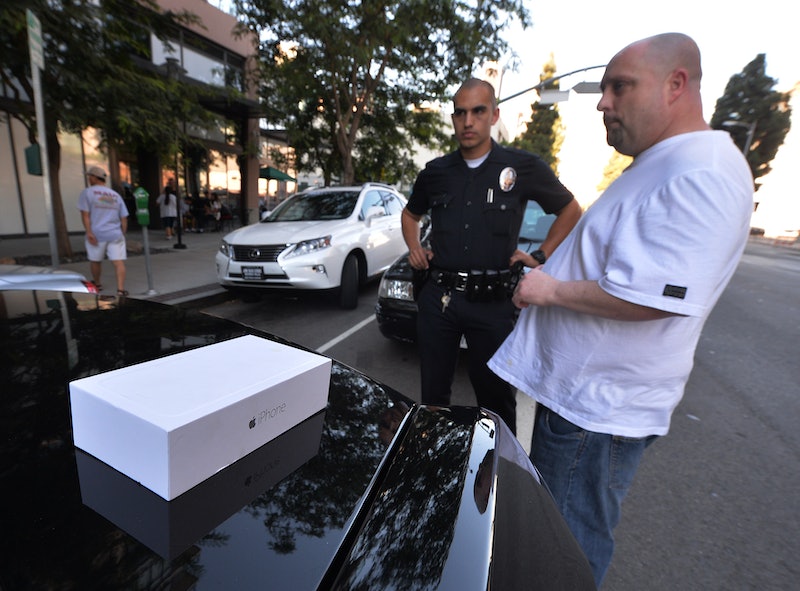 When Apple unveils a new product, the immediate buzz surrounds what novel technology sets the latest device apart from its predecessors. In the case of Apple's big Tuesday reveal of the iPhone X, one of the most hyped new elements was the FaceID feature. The iPhone X is able to recognize its user's face, and can be programmed to unlock when it sees the owner it knows. FaceID will likely be met with police approval, but privacy advocates are already raising concerns about how this technology might be abused.

Outside of fostering a collective wonderment at Apple's ability to innovate, some might question the reason for FaceID in the first place. After all, the fingerprint unlock feature — already widely available on previous iPhone models — has a likelihood of someone's print matching enough to unlock a phone at less than 1 in 50,000. The new Face ID pushes those already minuscule odds into nearly statistical impossibility, guaranteeing a less than 1 in 1,000,000 chance of the iPhone X being face hacked.

Apple argues FaceID saves time, noting that iPhone users unlock their phones about 80 times a day. A simple glance, rather than holding down a button or tapping in a pin code, cuts down on time spent gaining access to your phone.

But for privacy advocates and civil rights defenders, the issue with FaceID has nothing to do with recovering lost seconds. Their concerns start with the Fifth Amendment — a person's right against self-incrimination.

Access to a phone or computer can be a huge boon for law enforcement. But under current law, police cannot compel a suspect to give up their passcode. A pin-locked phone is thus protected.

A thumbprint-locked phone, however, is not — judges in prior cases have ruled that a member of law enforcement is free to physically force a suspect to hold their finger down on the unlock button. The argument for this ruling comes down to the thumbprint being "more of an act of identification than an act of testimony," according to Ben Collins at The Daily Beast.

It's hard to imagine how facial recognition would be any different. Hypothetically (and distressingly easy to imagine), a law enforcement officer could simply hold the phone in front of a suspect's face. If a forced thumbprint is legal, certainly a physical contact-free face scan would be similarly condoned by the courts.

There's at least some evidence that consumers are feeling skittish about biometrics technology of the kind Apple employs in FaceID. In a survey of 3,000 adults, a full 40 percent found biometrics too risky an option for identification. But with online identity theft becoming ever more of an issue, many predict users will get past those fears and ultimately feel more secure with, say, facial recognition than a generic number/letter code.

For now, the American Civil Liberties Union has advised against using FaceID. Apple has tried to address these concerns: It now offers an SOS feature that allows users to quickly shut down thumbprint unlocking, forcing the phone into passcode mode. And in order for FaceID to work, the owner must have their eyes open. Ostensibly then, a suspect could simply look down, or keep their eyes shut, and their phone would remain locked.

Technology often moves much faster than litigation, so it can take a while for the courts to catch up. If there is an eventual consensus that biometric data cannot be used against a suspect's will to unlock their mobile devices, then widespread adoption of features like FaceID will probably be more likely.