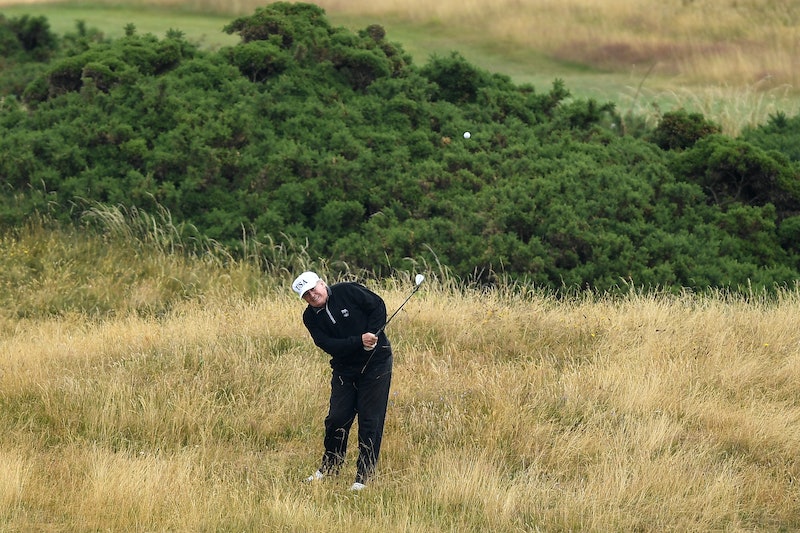 Being the president of the United States is one of the most important jobs in the world. But in some ways, it's just like any other job. For example, if you're wondering whether a president can take vacation, the answer is a resounding yes — although they can't tune the world out during their vacations quite as much as your average employee might be able to.

President Trump, for example, will be on vacation this week at his golf club in Bedminster, New Jersey, as the Washington Post reported. During the summer of 2017, the Post reported that Trump spent a full 17 days in Bedminster, which his aides described as a "working vacation." Axios noted that Trump's staff attempted to fill the president's time as much as possible during his first summer vacation, believing that it would stop him from aimlessly tweeting. This year, however, they reported that his vacation will consist mainly of "executive time," which he is free to structure as he likes.

This, of course, is the same president who wrote the following dismissive line on the subject of vacations in one of his books, Think Like A Billionaire: "Don't take vacations. What's the point? If you're not enjoying your work, you're in the wrong job."

Perhaps it's the stress of the presidency that has Trump taking the same sorts of vacations that he relentlessly mocked his predecessor for on Twitter. After all, Barack Obama and Trump are far from the only presidents to take some valuable time off for rest and recuperation. The news was already reporting on presidential vacations as far back as Theodore Roosevelt, whose bear hunting vacation in 1902 eventually led to the coining of the term "teddy bear," according to the Washington Post.

According to Business Insider, the Obamas tended to go to Barack's home state of Hawaii for their vacations and took a few summer trips to Martha's Vineyard in Massachusetts. Before the Obamas occupied the White House, the Bushes favored the family ranch in Crawford, Texas. Ronald Reagan also liked going to his ranch, which was in Santa Barbara, California. Franklin Delano Roosevelt often went to Warm Springs, Georgia, where there were hot springs that could ease the pain caused by his polio.

Given that history, it's not at all notable that Trump would be getting a summer vacation. He is, however, running into some criticism on Twitter and elsewhere because of how much he used to berate Obama for taking time off. In an interview on CBS' 60 Minutes soon after the election, Trump also said that "There's just so much to be done, so I don't think we'll be very big on vacations, no." According to a Washington Post analysis done in August of 2017, though, Trump had already spent three times as many days at leisure than Obama had at the same point in his first term.

All in all, presidential vacations aren't only allowed; they're an essential part of the presidency, and watching where presidents go gives the public insight into who their leader is as a person rather than just as a politician. Surely, a relaxed commander in chief is desirable. Trump is no different from any other president in his propensity for spending time away from the Oval Office — it's just that the other presidents never complained that previous presidents had done the same thing.