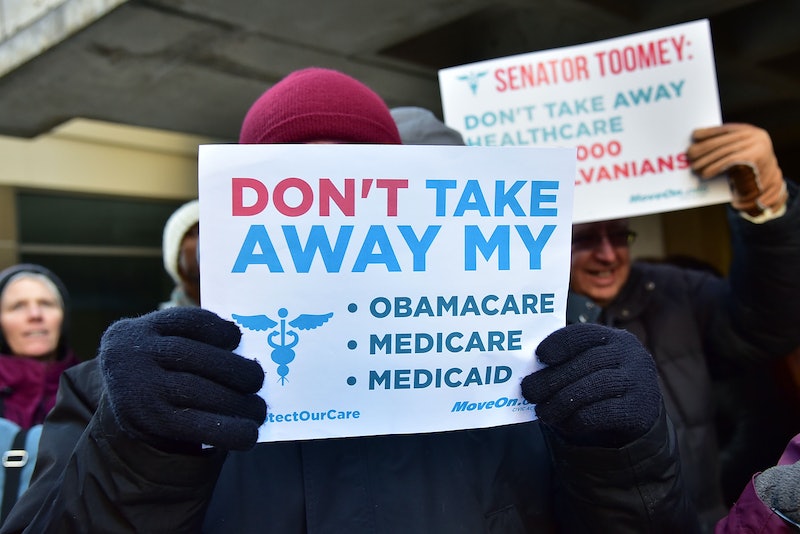 In the wee hours of Thursday morning, Republican Senators voted on a budget measure that would allow them to defund the Affordable Care Act (commonly referred to as Obamacare) with just a simple majority in the Senate. And with all the talk of Republicans' goals to change healthcare, many are wondering if they can repeal and replace Obamacare at the same time?

The law isn't done yet. The House still has to vote on the budget and then the actual defunding, leading to another Senate vote, and then of course the president must sign or veto the law, but this was the big first step, making it clear that they're serious. They have the ability to destroy the law, without any Democratic votes.

But the budget measure that allows Republicans to take away Obamacare's funding doesn't give them a similar ability to change the regulations that go with it, or replace the law with a new healthcare plan; instead, they'd Democrats on board for that.

Earlier on Wednesday, President-elect Donald Trump told reporters during a press conference that the repeal of the law would take place at the same time as a replacement effort. Other Republican Senators (and many Americans) have brought up similar concerns, worried that repealing the law without providing a worthy replacement would cause over 20 million Americans to lose their healthcare, and potentially wreck the $3 trillion healthcare industry.

So why is it so difficult for Republicans to put forward their replacement plan at the same time? As Democrats insist on pointing out, they've had seven years to come up with an alternative. How did they procrastinate so much?

Republicans have been irresponsibly unclear about what their goals are in repealing or replacement, which is why they haven't come up with a clear replacement plan. Philip Klein, an editor for the Washington Examiner who writes about healthcare policy, stated it best:

Republicans...are having a tough time stating a simple truth, which goes something like this: "We don't believe that it is the job of the federal government to guarantee that everybody has health insurance."

The complaints from Republicans against Obamacare mirror the biggest ones Americans have: not all people are covered, healthcare costs continue to rise, the insurance people get isn't as good as they'd like, and there aren't enough choices. But the various healthcare plans that are floating around Republican policy circles without widespread agreement don't address these issues. The changes Republicans focus on are cutting taxes for the wealthy whose health insurance is taxed to pay for others, and on eliminating the mandate that all Americans must buy health insurance, which allows insurers to spread around risk between healthy and sick people they cover while no longer denying people coverage for "pre-existing conditions."

If Republicans put forward a clear plan for Obamacare replacement before repealing, they'd have to admit that their plan would lead to fewer people (including many Trump voters) having healthcare, similar year-to-year price increases, and a potential increase in the deficit, with the positive trade-offs of cheaper healthcare for the wealthy, and the "freedom" to not have healthcare.

It's hard to believe that plan would be popular. So in the meantime, they're just hoping that they can repeal the bill, and tell the American people that replacing it will give fewer of them more expensive healthcare later.