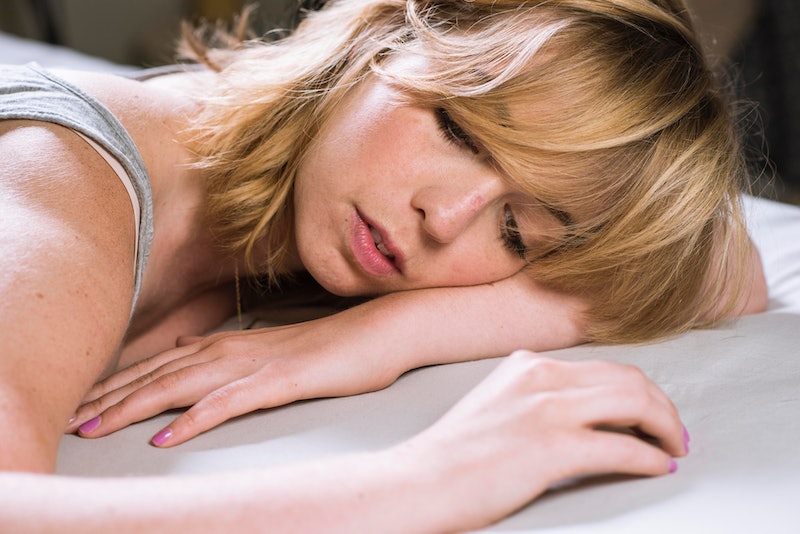 When I was in high school, my parents were pretty strict about bedtime — if I was awake later than midnight, I'd get in trouble. I was angry because I wanted to stay up all night chatting with my friends on AOL Instant Messenger, but it turns out mom and dad may have been right all along — new research says adolescents who don't get enough sleep are at a higher risk for certain mental health conditions. According to a study from researchers at the University of Pittsburgh, sleep deprivation can cause mood disorders, including anxiety, in teens. The researchers brought 35 pre-teens and teenagers to a sleep laboratory for two nights and divided them into two groups. Half of the teenagers got to sleep for 10 hours, while the others slept for only four hours each night. A week later, the teenagers came back to the sleep lab and switched up their sleep schedules — the participants who were sleep-deprived during the first part of the study got 10 hours, and the kids who got 10 hours of sleep the first time around were allowed to sleep for only four hours.

During the study, participants answered questions about their emotional well-being after waking up. The findings: The longer a pre-teen or teenager slept, the less likely they were to report depressive symptoms. "Even a short period of sleep restriction could, over the long-term, raise their risk for depression and addiction," according to a press release about the study.

Sleep deprivation affects the putamen, a part of the brain that helps with limb movement and also "plays a role in goal-based movements and learning from rewards," according to a summary of the study's findings. In order to measure the effects of sleep deprivation, the teens in the study played games for monetary rewards and underwent brain scans as they played. For those who were sleep-deprived, the putamen was less responsive, which wasn't the case for the participants who got enough sleep. Even though they had a chance to win money, they weren't as motivated as their well-rested counterparts.

Though this study's sample size was relatively small, previous studies have also suggested a link between anxiety and sleep deprivation in adults, so this research confirms some of what scientists already suspected. The scary thing is that adolescents don't have fully developed brains, so sleep deprivation could change the way they handle things in the long term.

"The results suggest that sleep deprivation in the tween and teen years may interfere with how the brain processes rewards, which could disrupt mood and put a person at risk of depression, as well as risk-taking behavior and addiction," the study says.

Whether you're a teenager or adult, you should prioritize getting good sleep because it can make you more productive and happier. According to the National Institute of Health, some of the best ways to get a healthy amount of sleep are avoiding large meals before bed, turning off your computer and phone an hour before you need to go to sleep and keeping your bedroom quiet and dark. You should also avoid sleeping in on weekends because it can "disrupt your body clock's sleep–wake rhythm."

I don't think I'll sacrifice sleeping late on weekends anytime soon, but I'm definitely going to be more aware of how much sleep I'm actually getting after reading this study. Researchers blame "the increasing use of phones and tablets late into the night" for making sleep deprivation a way of life for both children and adults, and I'm definitely guilty of scrolling through social media feeds for hours after I get in bed. I'll think of this research the next time I'm tempted to look at memes until 3 a.m., and I'm going to thank my parents for being so strict about bedtime when I was younger.