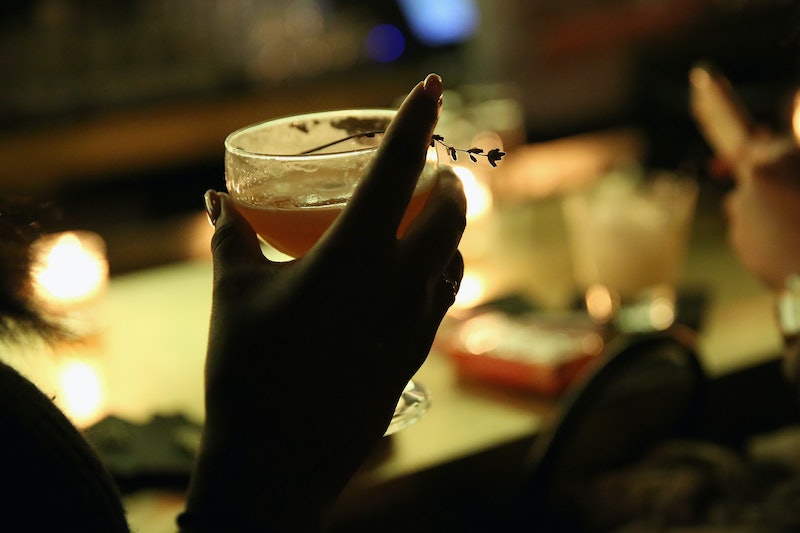 Life is comprised of absolute truths: The sun rises in the East, it sets in the West, and drinking Everclear, orange juice, cheap beer, and an energy drink will 100 percent make the next morning a blazing hellscape. But because it's 2017 and, frankly, the basic rules of the universe have been rendered moot, a group of college students claim to have the cure for hangovers — or at least, something that might prevent your hangover from being quite so bad. Maybe this year isn't the worst in history after all. (Just kidding; I'm not trying to minimize the horrors of this administration; I'm just using irreverence as a coping mechanism.)

Liam McClintock and Margaret Morse, both seniors at Yale University, have raised $25,915 through their Indiegogo campaign for SunUp, a "natural" hangover cure, which they developed in partnership with Yale professors, nutritionists, and a pharma manufacturer. At $5 a packet, these bad boys promise to engage in preventative care, "priming" your body for alcohol consumption before any such sin water passes thine lips.

Before we can discuss the validity of SunUp, though, we should probably review what causes hangovers in the first place. Ha ha, got ya, no one really knows, apart from "alcohol." There are several main theories, all of which fall under "alcohol is poison and we probably shouldn't drink it." There's even a name for it the phenomenon: veisalgia.

As Smithosonian Magazine notes in their "Complete Guide to the Science of Hangovers," the most basic explanation for hangovers, and one you've probably heard often, is dehydration. Alcohol acts as a diuretic, and, be honest, you're usually not hitting the water fountain particularly hard during a party. But while dehydration probably accounts for some of the hangover symptoms — dizziness, lightheadedness, thirst — it doesn't cover the full spectrum of awful.

Another theory is that, in order to process alcohol, your body has to convert the enzyme NAD+ into another form, NADH. The heightened levels of NADH and the lowered levels of NAD+ inhibit your cells from performing even basic metabolic duties.

The most widely accepted hypothesis at this point, though, is that a build up of acetaldehyde, a byproduct of alcohol between 10 and 30 times more toxic than alcohol itself, is responsible for the fatigue, nausea, dizziness, stomach problems, thirst, headache and regret we've all probably experienced at least once in our lives.

SunUp works with all of these theories. According to its creators, its 15-ingredient blend, to be mixed with water and consumed before a night out, allegedly addresses the buildup of acetaldehyde, as well as inflammation caused by your immune system going into overdrive, "glutamine rebound," which can disturb your sleep cycle, and the loss of vitamins and electrolytes.

As alcohol researcher and Brown University Warren Albert Medical School professor of psychiatry and human before Robert Swift, PhD, explained to Cosmopolitan, though, we probably shouldn't be praising the party deities for granting us with a magical cure-all quite yet. "Without a controlled clinical study, you can't really say that something 'works,'" said Swift. Additionally, he continued, the fact that so many things might cause hangovers might hamper SunUp's efficacy — that is, what works to alleviate the awfulness for one person might not work for another.

Got a hangover cure of your own? Please share. Please. Sharing is caring and I'm getting old and I can't spend another Saturday trapped in my room watching Dr. Quinn, Medicine Woman on my phone because the outside is too loud and bright. I can't. I won't