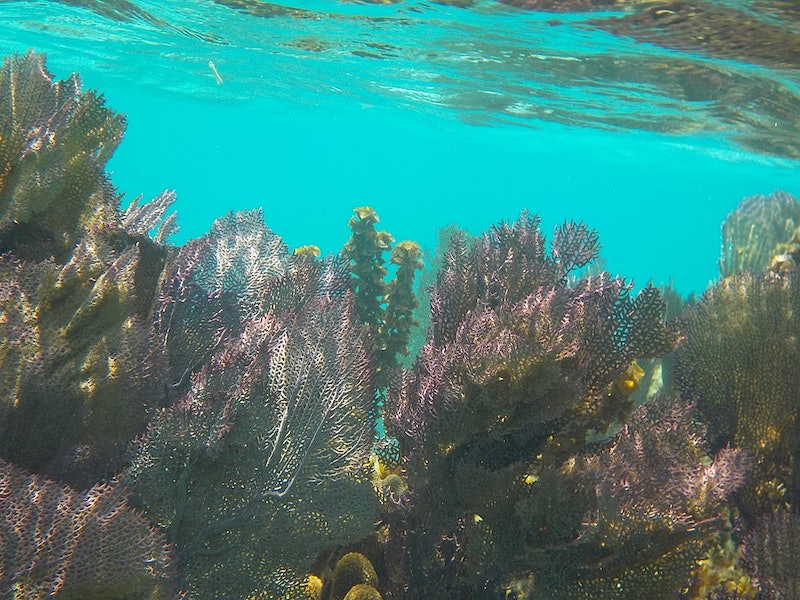 The largest barrier reef in the northern hemisphere is officially no longer in danger. The United Nations Educational, Scientific and Cultural Organization (UNESCO) announced this week that it has decided to remove the Belize Barrier Reef Reserve System from its list of endangered sites around the world. In a press release about the decision, UNESCO attributed the reef's salvation to conservation efforts, "notably the [Belize government's] introduction of a moratorium on oil exploration in the entire maritime zone of Belize." And though it of course can't be declared safe forever, the fact that the Belize Barrier Reef is safe for now is a clear indication that we can make lifesaving changes in habitats we've negatively affected if we just start to care about them.

According to Smithsonian, the Belize Barrier Reef is part of the 600-mile long MesoAmerican Reef System, which is the second largest reef system in the world. The Belize Barrier Reef has seven sites that comprise "offshore atolls, several hundred sand cays, mangrove forests, coastal lagoons and estuaries," and is "a significant habitat for threatened species, include the marine turtle, the manatee and the American marine crocodile," UNESCO wrote in its press release.

Per UNESCO's press release, the Belize Barrier Reef was added to the World Heritage List in Danger in 2009 "due to the destruction of mangroves and marine ecosystems, offshore oil extraction, and the development of non-sustainable building projects." In addition to an oil moratorium, forestry regulations were also bulked up, which UNESCO wrote has helped better protect the reef's mangroves.

The policies were put in place by the government of Belize after a significant outcry from conservation activists, who, after the Deepwater Horizon oil spill in April 2010, "began looking more closely at Belize’s own oil landscape," National Geographic reported. Janelle Chanona, an Oceana director, told National Geographic she and her fellow activists learned "everything — the entire marine territory — had been blocked off and sold" to oil companies.

Fanny Douvere, the coordinator of the marine program at UNESCO's World Heritage Centre, told The New York Times, "In the last two years, especially in the last year, the government of Belize really has made a transformational shift."

But it's vital to remember that this transformation can be reversed. John Bruno, a marine ecologist at the University of North Carolina at Chapel Hill, told The New York Times, "The primary threats are all still there. The big one, of course, is ocean warming." The New York Times noted that ocean warming has had clear effects on the Great Barrier Reef, and that in 2016, "[a]n underwater heat wave in Australian waters [...] spurred a die-off of coral so severe that scientists say that reef will never look the same again."

A viral post that circulated the internet in 2016 claimed scientists had declared the Great Barrier Reef dead due to "increasing sea surface temperatures and ocean acidity," Snopes reported, and mourned the reef with a grim opening line: "The Great Barrier Reef of Australia passed away in 2016 after a long illness. It was 25 million years old." The article is misleading in its claim that the reef "passed away," according to Snopes' fact-checking, but its assertions about just how endangered the Great Barrier Reef is don't seem far off from reality, and the state of the reef gives us a glimpse at the damage that can be done if protective policies aren't put in place and enforced. When UNESCO expressed concerns about the reef in a 2016 report, Australia "successfully demanded" that the chapter be cut from the report "so that it would not affect tourism," The New York Times reported.

Continuing to protect the Belize Barrier Reef is vital, since "recent research shows that all reef systems should expect major bleaching events at least once a decade and that as ocean temperatures continue to climb due to climate change, they may become even more frequent," according to Smithsonian. And the Belize Barrier Reef in particular still faces dangers from "increasing cruise-ship tourism and development, an invasion of lionfish, which decimate other tropical species, and pollution runoff," Smithsonian added.

The fact that the Belize Barrier Reef is healing is undeniably good news — but good news can't be taken as a sign that the reef is out of danger forever. In order to encourage it and other reefs to heal, protective policies must be put and kept in place, or we risk seeing them added to the endangered list all over again.