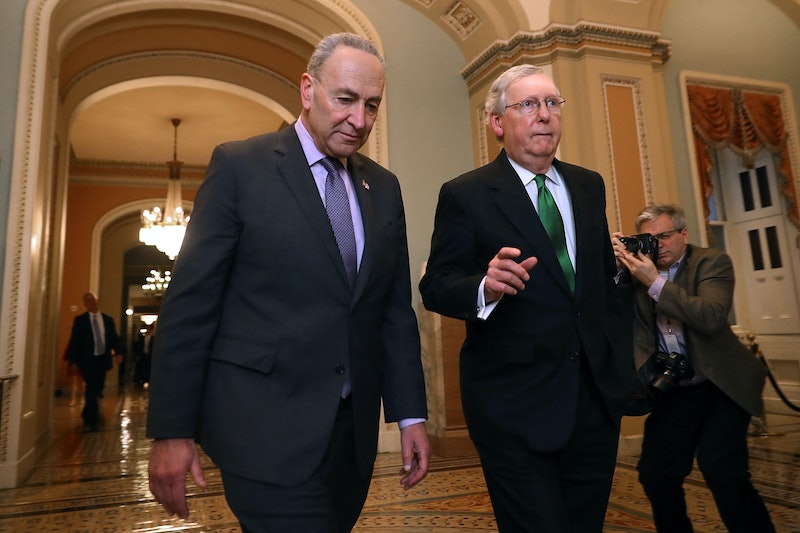 On Sept. 24, House Speaker Nancy Pelosi announced that the House of Representatives is launching a formal impeachment inquiry into the president of the United States. While this process is initiated in the House, you may be curious whether the Senate can stop impeachment. The Senate actually has quite a bit of power when it comes to deciding if a president should be removed from office, but that decision only arises if the House first decides to impeach a president.

As Vox reported, the impeachment and removal process is actually outlined in the U.S. Constitution. It says that a president can be impeached and removed from office for charges that include "treason, bribery, or other high crimes and misdemeanors." After an impeachment inquiry (like the one Pelosi announced this week) kicks off, the House Judiciary Committee typically investigates the matter. This committee then decides whether there's enough evidence to draw up articles of impeachment, TIME noted. If it determines there's adequate evidence, these articles of impeachment are brought to the House for a full vote. From there, a simple majority is required to impeach a president.

If the House does indeed vote in favor of impeachment, the Senate then holds a trial and ultimately votes on whether or not to convict the president and remove them from office, Vox explained. A conviction and removal requires a two-thirds majority Senate vote.

So, technically the Senate can't stop the House from moving forward with the impeachment process steps. It can, however, stop a president from being convicted and removed from office. In fact, in several instances throughout history, American presidents have been impeached by the House, but not convicted by the Senate — meaning they remained in office.

Impeached presidents include Andrew Johnson and Bill Clinton, USA Today reported. The outlet added that the House was also in the process of considering articles of impeachment for former President Richard Nixon right before he resigned back in 1974.

In Trump's case, as USA Today described, there's certainly a possibility that the House could vote in favor of impeaching him, especially considering that Democrats significantly outnumber Republicans in the chamber, by 235 to 198. In the Senate, however, a conviction and removal seems less likely, as Republicans outnumber Democrats (there are 53 Republicans, 45 Democrats, and two Independents who usually vote with Democrats).

As the New York Times reported, thus far it seems unlikely that so many Republicans would break with Trump and vote to remove him from the presidency if it got to that point. In fact, as CNBC emphasized, because of the two-thirds majority vote requirement, removal would only occur with the support of at least 20 Senate Republicans, along with that of all Senate Democrats and both Independents.

As you can see, the impeachment and removal process is somewhat complex and involves many different steps. Right now, all attention is on the House, as the Senate only comes into play if the House decides to move forward with impeachment.