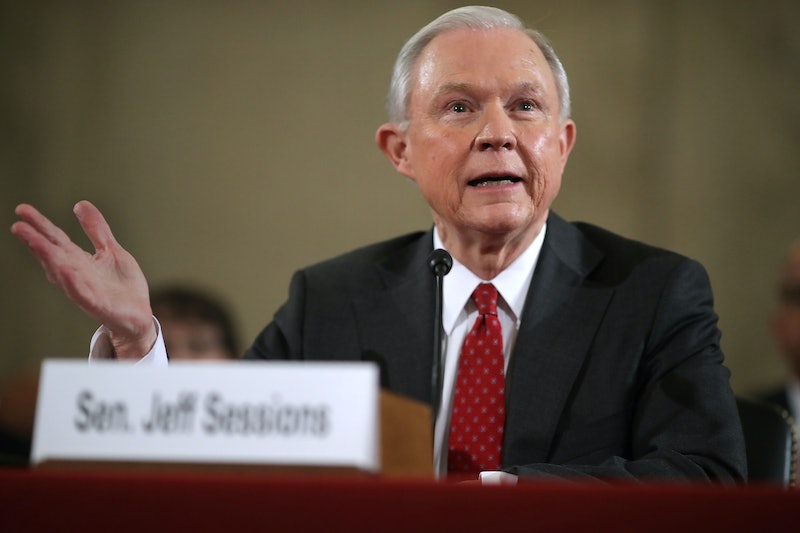 Last week, the Senate Judiciary Committee decided that it would wait until this Tuesday to vote on Sen. Jeff Sessions' confirmation as attorney general. The Democrats wanted more time to review his paperwork, including 200-some pages of written answers to questions posed by the committee. In theory, that should be reviewed and a vote should be moving forward. But now there's a hiccup in the whole process. President Donald Trump has made the DOJ the center of his travel and refugee ban controversy. So given that, can the Senate stop Jeff Sessions from being confirmed as attorney general?

Technically, yes, the Senate can — although delaying longer may be the best the Democrats can hope for. It is expected that Sessions will make it through the committee vote Tuesday with all Republicans voting in favor and all Democrats voting against, The Washington Post reported. Because there's no filibuster on appointment confirmation votes anymore, the GOP just needs its simple majority to confirm Sessions — and one West Virginia Democrat has already said he will support the vote.

All of this will happen after the Justice Department became the center of the storm around President Donald Trump's refugee and travel bans Monday night. Sally Yates, the acting attorney general, instructed the DOJ not to defend the executive order, explaining that her role is to "always seek justice and stand for what is right" and she was "not convinced that the defense of the executive order is consistent with these responsibilities." Ouch. To Trump, those were fighting words and he promptly dismissed her with someone who would comply.

Back to the option of delaying, which has been the Democrats' tactic thus far. They could begin an extreme version of it, using procedural maneuvers to deadlock the confirmation votes. That's the kind of the thing the Republicans were so good at during the Obama Administration, and it could be used as leverage for the travel ban, The New York Times reported.

The idea goes that unless Trump rescinds the ban, he won't get Sessions confirmed anytime soon. And in the meanwhile, the DOJ may not defend the executive order as well as it would under a Trump appointee. Trump may have even figured that out. He has taken to Twitter, both Monday night and early Tuesday, to attack the Democrats for the delays on the Senate confirmation.

ACLU political director Faiz Shakir has called for activists to push the Democrats for a delay on Sessions. "We’ve got [attorney general nominee] Jeff Sessions, who we’re told was involved somehow in the drafting of these executive orders,” Shakir said on a MoveOn.org call Sunday. “If they want to press this through, say: You don’t get an attorney general until you overturn the Muslim ban."

The question then is whether or not the Democratic senators got the message. Many Dems attended a rally Monday night to protest the ban, but no promises were made regarding Sessions. If you think his confirmation should be delayed (if it can't be defeated) call your senator today.