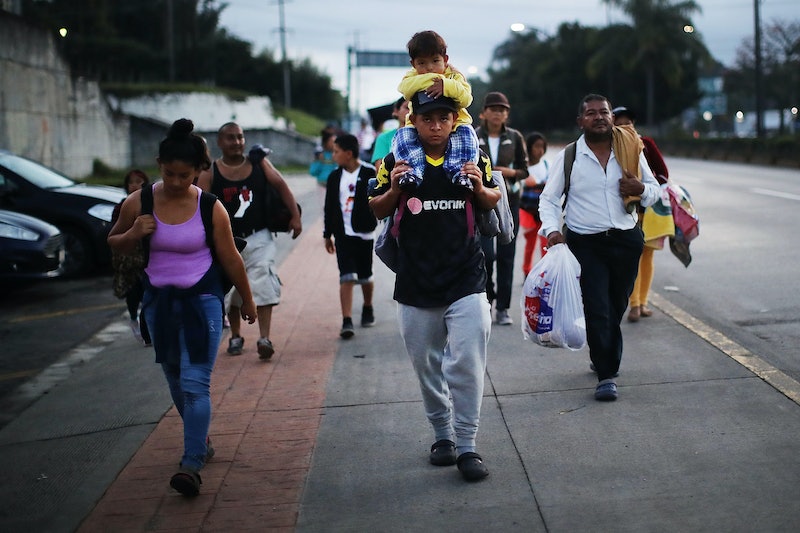 On Thursday, the Departments of Justice and Homeland Security announced a slate of new immigration regulations that, in conjunction, would ban many immigrants from seeking asylum in the U.S. It will almost certainly draw legal challenges, as it's not clear whether President Trump's attempt to change current asylum rules are legal.

The changes involve several complex mechanisms, and not all of the details have been announced. But the basic consequences are clear: Undocumented immigrants from certain countries who enter the United States from Mexico will automatically be deemed ineligible for asylum if they don't cross the border through a port of entry (that is, an official immigration checkpoint). They will instead have the option of seeking a different status — one which provides fewer protections and is much harder to obtain.

However, the administration's plan may well be illegal, because the Immigration and Nationality Act says that immigrants on U.S. soil may seek asylum "whether or not" they arrived through a port of entry. Lee Gelernt, deputy director of the ACLU's Immigrants' Rights Project, told NBC News that Trump's moves are "patently unlawful," and said that "there will be a court challenge." But Secretary of Homeland Security Kirstjen Nielsen and acting Attorney General Matthew Whitaker said in a joint statement that Trump "has the broad authority to suspend or restrict the entry of aliens into the United States if he determines it to be in the national interest to do so."

Under current law, all immigrants who enter the United States without papers — regardless of where the enter — can request asylum, in which case they're given an interview with an asylum officer. If that officer determines that the immigrant has a "credible fear" of persecution in their home country, the immigrant is allowed to make their case for asylum in front of an immigration judge. As the case proceeds, they are allowed to live and work in the United States, regardless of whether they're ultimately granted asylum.

However, the Trump administration plans to change this process, and replace it with a system that will significantly restrict the number of immigrants eligible for asylum. This new system will be implemented through two legal mechanisms: a new asylum rule, which the administration announced on Thursday and will officially publish in the Federal Register on Friday, and an executive order that Trump is expected to sign within a matter of days.

The new asylum rule states that any immigrants who enter the country in violation of "a presidential suspension or limitation on entry into the United States through the southern border with Mexico" will automatically be deemed ineligible for asylum. It will take effect on Friday, the administration said.

Then, Trump will sign a corresponding "presidential suspension or limitation" — specifically, a presidential proclamation — that requires asylum-seekers to enter the United States through a port of entry. Trump spoke about it openly to reporters on Thursday, and said he expects it to come "sometime next week." It's unclear exactly which asylum-seekers the order will apply to, but The New York Times says it's expected to apply to immigrants from Central American countries.

In conjunction, these two policy changes will mean that certain (and perhaps most) immigrants who seek asylum without going through a port of entry will be deemed ineligible for asylum, and won't have the opportunity to plead their case in front of an immigration judge.

Instead, they'll be able to seek a lesser form of protection called "withholding of removal." This will require them to prove not only that they have a "credible fear" of persecution in their home country, but that such persecution is more likely than not to occur. This is known as the "reasonable fear" standard.

That may sound like a minor distinction. But according to Vox, only around 25 percent of immigrants who seek withholding of removal are able to clear the "reasonable fear" standard; by contrast, 75 percent of immigrants who seek asylum are determined to meet the "credible fear" qualification. In addition, those who are granted withholding of removal aren't given a pathway to permanent residency, as asylum seekers are.

There's a reason many asylum seekers don't use a port of entry when entering the United States. Although the Trump administration has claimed otherwise, many immigrants are flatly turned away a ports of entry, giving them no other option for seeking asylum than by crossing the border illegally and then applying for protected status.

Only time will tell how all of this unfolds. But the new rules will almost certainly end up in court before very long.