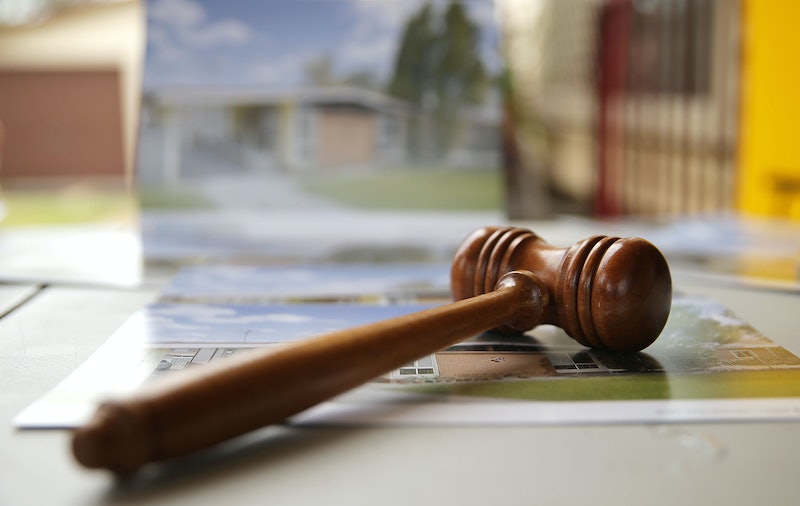 Life for transgender students in the U.S. may become even harder than it already was, thanks to Donald Trump's revocation of Barack Obama's guidelines permitting students to use the bathroom of their choice. In a statement about the decision, Attorney General Jeff Sessions wrote that "The prior guidance documents did not contain sufficient legal analysis or explain how the interpretation was consistent with the language of Title IX." The statement goes on to add that policies concerning transgender students' use of public school bathrooms is now left up to Congress and state and local governments. But can Trump be sued for revoking trans student protections? It will all come down to court interpretations of Title IX.

The Title IX line under scrutiny is:

No person in the United States shall, on the basis of sex, be excluded from participation in, be denied the benefits of, or be subjected to discrimination under any education program or activity receiving Federal financial assistance.

And the confusion lies in the scope of the phrase "on the basis of sex." Essentially, the Trump administration's argument is that Title IX doesn't protect against discrimination on the basis of gender identity. But there are many people, besides the Obama administration, that disagree with that argument. And there are many people who are worried about what Trump's decision will mean for the safety of transgender youth, who face more harassment, violence, and discrimination in school than their cisgender classmates.

The likelihood that Trump himself will be sued for this decision is low, though, as ABC News explained in 2014 when John Boehner threatened to sue Barack Obama for executive overreach. It would be an unprecedented move that, logistically, would be very hard to pull off. But that doesn't mean that Trump can't be sued. In fact, as the Los Angeles Times' Matt Pearce found, he already has been sued at least 60 times since taking office.

Rather, the fight to reinstate protections for transgender students will likely take place in lawsuits against individual school districts. In fact, the Trump administration was partially inspired to move forward with the revocation by the upcoming Supreme Court case G.G. v. Gloucester County School Board. The case, in which 17-year-old Gavin Grimm is fighting for the right to use boys restrooms at his public high school, is set to be argued in front of the Court on March 28.

So while a lawsuit against Trump on this matter may not see the courtroom, Title IX lawsuits arguing for equal accommodations for transgender students in school will. With the president against them, transgender students will be the main forces in fighting for and winning state, local, and even federal protections.