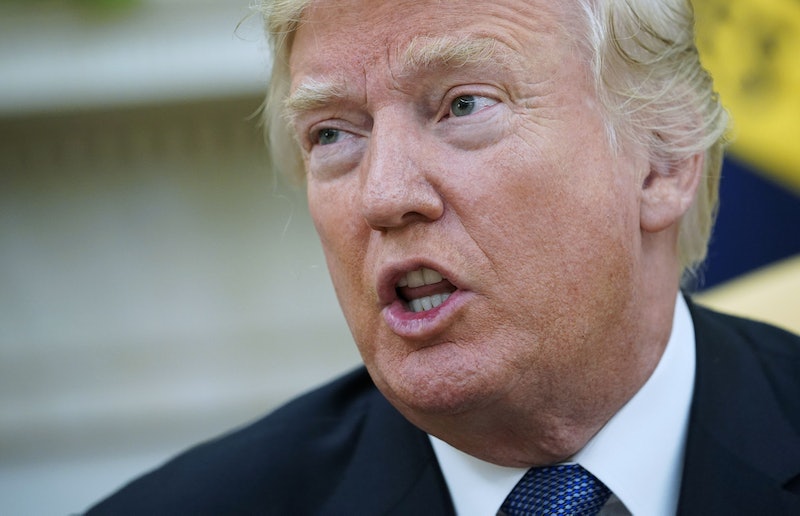 As The Hill reported on Tuesday, Trump's executive order is expected to allow small businesses or groups of individuals to come together to buy health insurance off of the Obamacare marketplace in what is known as an "association plan." However, it is possible that these association plans would not be subject to Obamacare rules, like protections for pre-existing conditions and required coverage of minimum essential health benefits.

The premise behind association plans is to allow people to band together so they can purchase health insurance more cheaply. However, if these plans are not subject to Obamacare rules, this could mean that healthy people can band together to purchase insurance off of the marketplace at a lower cost, but those with pre-existing conditions would only be able to buy insurance through the Obamacare marketplace — since they would only be offered protections for their pre-existing conditions via marketplace plans.

The addition of an association plan option would likely cause many insurers to leave the Obamacare marketplace, since only costlier, sicker people would remain in it, which would then drive premium prices way up for those who still utilized Obamacare. As The Hill pointed out, this could result in widespread instability in the Obamacare marketplace as well as a situation in which only those who are healthy can afford health insurance.

Tim Jost, a law professor at Washington and Lee University, told Vox that, if enacted as described above, the impact of Trump's health care executive order on Obamacare and on insurance coverage for Americans could be absolutely detrimental:

It will destroy the small-group market. ... We'll be back to where we were before the Affordable Care Act.

Kevin Lucia, a research professor and project director at Georgetown University's Health Policy Institute, also minced no words when it came to describing the implications of the potential executive order on Obamacare.

This appears to be a backdoor way of undermining the Affordable Care Act.

However, those who support association plans say that concerns about the impacts on Obamacare are not accurate. As Kevin Kuhlman, director of government relations at the National Federation of Independent Businesses, an organization which has staunchly opposed Obamacare, told The Hill, "Allowing people more affordable arrangements is not a bad thing," adding that he believes that fears about association plans undermining the Obamacare marketplace are "overblown."

Still, it is challenging to fully make any determinations about the executive order, since it is still possible that Trump will make changes to its contents or not sign it at all — something which, according to Vox, he has done with other executive actions in the past.

Moreover, as The Hill reported, if Trump does sign an executive order similar to the one described above, it could face legal challenges, particularly if, in addition to groups of people and small businesses, it also allows individuals to buy association plans and thwart the Obamacare marketplace and Obamacare plan requirements.

Trump's potential Obamacare executive order is expected as soon as this week, since the president tweeted the following on Tuesday:

Since Congress can't get its act together on HealthCare, I will be using the power of the pen to give great HealthCare to many people - FAST.

Many insurers, as well as the general public, are likely anxiously waiting to see if and when Trump's executive order will come out — and what exactly it will contain, as it could potentially have very substantial implications for health care in the United States.