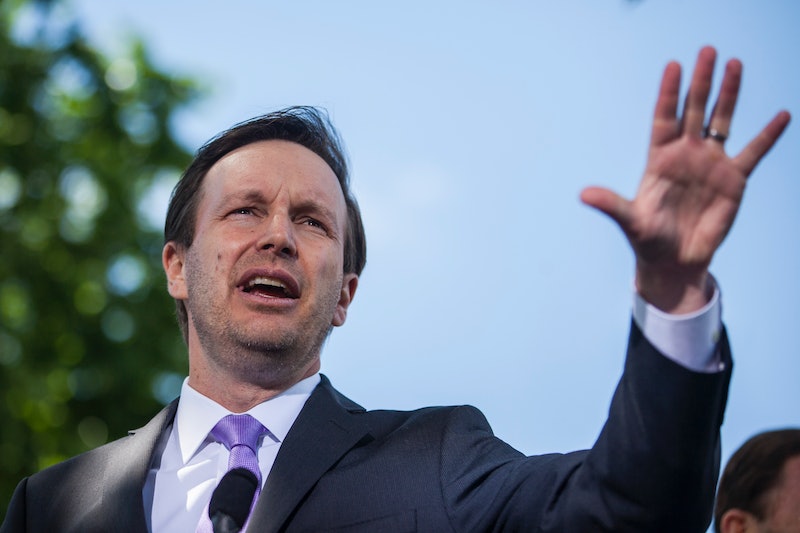 The escalating rhetoric between President Trump and North Korea has left people nervous over the prospect of war between the two countries, nuclear or otherwise. Instead of just stewing in that concern, three Democratic senators have announced that they will introduce a bill limiting Trump's powers to preemptively strike North Korea. On Wednesday, Sen. Chris Murphy announced on his Twitter feed that he, along with Sens. Cory Booker and Brian Schatz, would be putting forward a bill to "prohibit any preemptive action without [a] vote by Congress."

In further tweets, Sen. Murphy explained that the bill will seek to "clarify Trump's war powers" because a "mistake by Trump could kill hundreds of thousands on Korean Peninsula." According to this bill, any preemptive action that Trump takes would be illegal.

"For all the Republicans breaking [with] Trump, here is your chance to actually constrain his most dangerous power - to make war," Sen. Murphy concluded his thread, referring to the recent string of three Republican senators outwardly criticizing the president.

The bill comes just days after Republican Sen. Jeff Flake announced his retirement with a scathing speech directed towards the president. Sens. Bob Corker and John McCain have also begun offering their own pointed criticism. Considering this growing opposition to the president, it's quite possible the bill will get some Republican support if any other senators are as concerned as the ones who have already spoken out.

While Sen. Murphy and his colleagues haven't specified exactly how the bill will go about limiting the president's powers, it's likely to target the War Powers Resolution, a 1973 act that attempted to balance the power to make war between the executive and the legislative branch. Currently, it requires Congress to authorize any conflict that goes past the 60-day mark, but it leaves some gray area as to whether the president can launch an attack, preemptive or not, without congressional approval. Based on Sen. Murphy's tweets, this new bill could aim to clarify, within the War Powers Resolution, that it is illegal for the president to launch a preemptive strike.

Trump hasn't been coy in his threats directed towards North Korea, including the speech at the U.N. General Assembly in which he said that the United States could "totally destroy North Korea." Many have noted his reactive nature, which heightens the fear that he could respond to an empty threat from North Korea with an actual bomb. Seen in this light, Sen. Murphy's bill could potentially save thousands, if not millions, of lives.

There could, however, be severe drawbacks to limiting the president's war powers. Congressional approval requires time, and a hostile nation could theoretically take advantage of that if they wanted to launch a preemptive attack on the United States. If this hostile nation was North Korea using a nuclear weapon, such a delay could absolutely prevent the United States from reacting effectively. A change to the War Powers Resolution would also last longer than merely this presidency, so if it's structured mostly as a check to this particular president's powers, it may not be worth the lasting consequences for future presidents whose colleagues do not regard them as such a threat.

Sen. Murphy and his colleagues have an uphill battle to fight in terms of getting it passed, especially since they will have to convince several Republican senators to sign onto it. Trump would ostensibly not sign a bill limiting his own powers by choice, so it would likely have to be passed with a veto-proof supermajority — and that's not even addressing the problem of getting it through the House.

If Congress is actually worried about Trump's inability to lead effectively in the realm of foreign policy — as Sen. Bob Corker claims that most Republican senators are — then Sen. Murphy is right. This could be an effective way to constrain him.