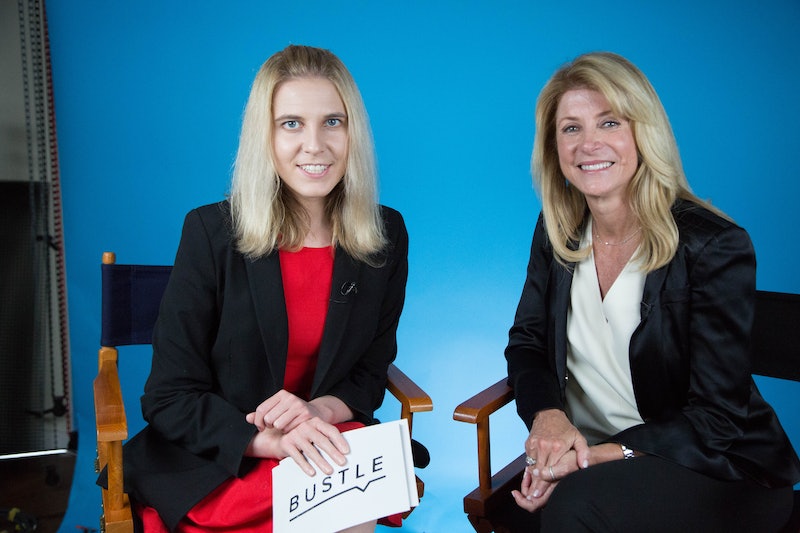 Best known for her reproductive rights advocacy and her epic 13-hour filibuster, former Texas state senator Wendy Davis joined Bustle on Tuesday for a Facebook Live interview. Davis specifically discussed Deeds Not Words, her group to empower women to become activists, as well as an answered larger questions about the meaning of the word "feminism" and what it means to be a feminist. So, Bustle asked Davis, can you be a feminist if you're not pro-choice?

To honor each hour of her famous filibuster, Bustle asked Davis 13 questions. During that landmark 2013 filibuster to challenge abortion restrictions targeting clinics and doctors, Davis stood continuously talking the whole time on her feet. In fact, the pink sneakers she was wearing got their own 15 minutes of fame, with one Amazon review promising, "The next time you have to spend 13 hours on your feet without food, water or bathroom breaks, this is the shoe for you. Guaranteed to outrun patriarchy on race day."

It's a debate that comes up in feminist circles and Davis think's it's a worthy one, too. "That's such a good question," Davis says. "Feminism I think can be defined in many different ways and in some ways it's a very subjective label, for lack of a better description."

The understanding of the word "feminism" has evolved since its inception and is constantly changing. According to the Merriam-Webster dictionary, the primary definition of feminism is understood as: "the theory of the political, economic, and social equality of the sexes." Still though, it's a word that continues to convey a different meaning to certain individuals.

Davis says, "My version of feminism believes that if women cannot control our reproductive destinies, then we cannot control our economic opportunity. It's so intricately tied together." She goes on to explain, "And so if we stand for women's advancement, we have to stand for the idea and the ideal that women are in possession of their own bodies, the freedom to make decisions about our bodies, and the ability to create opportunities for ourselves as a consequence of being able to do that."

While she is hesitant to pointedly exclude anyone from feminism, Davis makes it clear where she stands on the tie between a feminist and being pro-choice. "My brand of feminism says you must support reproductive rights in order to fully embrace and stand behind the advancement of women."