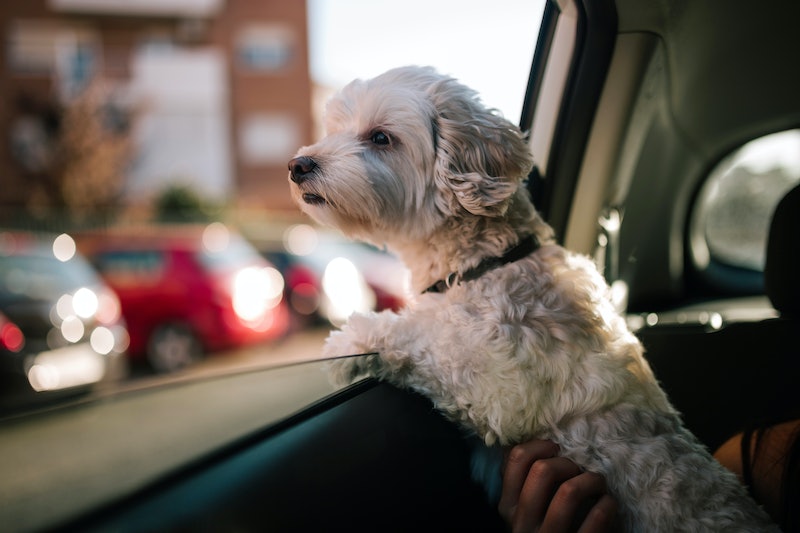 The days of you getting denied an Uber ride last minute because of your pet are over. The ride sharing app just announced that it'll be testing out a new feature starting Oct. 16 that will allow pet owners to alert Uber drivers ahead of time that they'll be riding with their pets. And while it will cost you a fee to do so, you can now bring your dog in an Uber, thanks to Uber Pet.

Riders in Austin, Denver, Nashville, Minneapolis-St. Paul, Philadelphia, Phoenix, and Tampa Bay will be the first to test out the pilot update on Oct. 16, according to Uber. If you live in any of these cities and want to bring your four-legged buddy along with you on your next Uber ride, all you'll have to do is click on "Uber Pet" in the list of options that pop up before selecting a ride, according to The Verge. After that, a surcharge ranging from about $3 to $5 will be added on top of your charges, and you'll be good to go.

And if you're traveling with a service animal, you don't have to worry about any extra fees — they're already covered. In fact, you don't even have to specifically use Uber Pet. Uber's already existing policies regarding service animals remain the same despite the update. The rules stated, "In accordance with local and federal laws in your area, service animals are permitted to accompany riders at all times," according to Uber's Help page.

Now, with Uber Pet, you'll know you can bring your furry friend along with you every time without any issues. "We built this feature to give riders peace of mind so they know they'll be able to arrive at their destination with their pet, without any interruptions or surprises," Uber wrote in a blog post sent to Bustle. "From the time you select Uber Pet, to your trip's arrival, and ending with your dropoff — you and your animal companion(s) can take Uber, together, with ease."

The Uber Pet update is one that has been long anticipated by pet owners. Up until now, using Uber with a pet was pretty unpredictable and also required extra work. After confirming a ride with Uber, you'd often had to call the driver ahead of time and let them know you had a pet with you to see if it was OK with them. If you didn't do that, then you'd have to risk your Uber driver showing up and denying you a ride because of allergies, potential mess, or even preference, The Verge reports.

Uber Pet is just another one of Uber's many upcoming launches aimed at improving user experience, as Tech Crunch reports. "We want Uber to be the operating system for your everyday life," Uber CEO Dara Khosrowshahi wrote in a press release on the Uber Newsroom on Sept. 26. "However you want to move around your city, and whatever you need, we want Uber to be your go-to app."

More like this
26 Ghost Story Podcasts To Get You Ready For Halloween
By Jessica Booth, Mia Mercado, JR Thorpe and Emma Carey
20 Smart Devices Under $35 That’ll Change The Entire Vibe Of Your Home
By Emma Carey
Here's How To Get Your iPhone To Update Automatically Forever
By Emma Carey
Why Everyone Is "Soft Tagging" Friends On Instagram Right Now
By Alexis Morillo
Get Even More From Bustle — Sign Up For The Newsletter