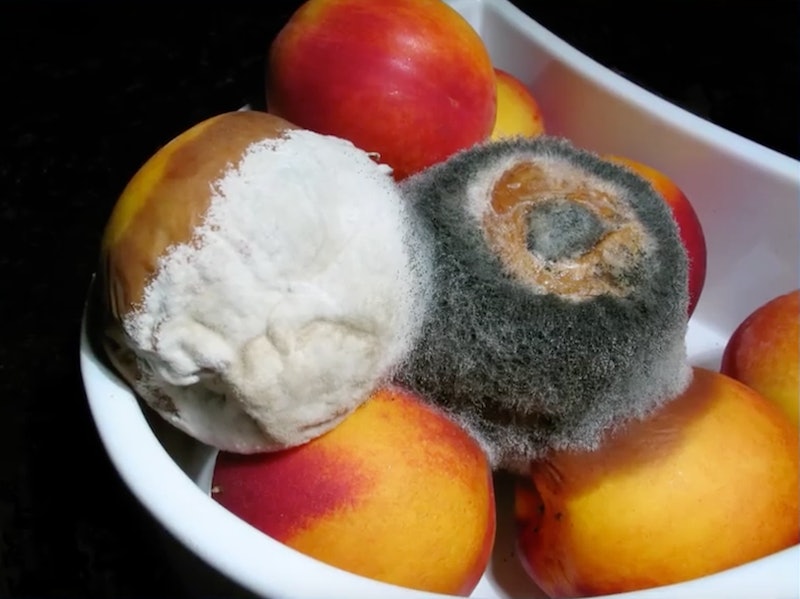 So you have your heart set on a sandwich for lunch. But, when you start spreading the mustard on the bread you notice a little green spot of mold. Just pick it out and proceed as normal, right? Nope. You really can't eat around the mold on bread, as some people on the internet just found out. Twitter users were aghast after a Twitter Moment from Tech Insider detailed how mold spores can spread to parts of food you can't see. That being said, there are a few exceptions to the no-moldy-food rule. While you shouldn't eat bread that has mold on it, Katherine Zeratsky, R.D., L.D., noted on the Mayo Clinic's blog that it is OK to cut the mold off of hard foods like hard cheese and eat it as you normally would.

With foods like fruit, bread, and soft cheese and vegetables the mold permeates the food, and it's not safe to eat (seriously, not even a little bit). According to the USDA, mold can grow deep roots and eating soft moldy foods — even if you've cut out the visible moldy part — could be dangerous to your health. "You only see part of the mold on the surface of food — gray fur on forgotten bologna, fuzzy green dots on bread, white dust on Cheddar, coin-size velvety circles on fruits, and furry growth on the surface of jellies. When a food shows heavy mold growth, 'root' threads have invaded it deeply."

While limited exposure to most molds probably won't cause long-term health problems, some molds can make you really sick. And, with more than 300,000 different types of fungi, it's best to err on the side of caution. "In dangerous molds, poisonous substances are often contained in and around these threads," the USDA explained on its website. "In some cases, toxins may have spread throughout the food."

But wait, isn't cheese made with mold? You're exactly right, some cheeses are made with mold, and the USDA said on its website that they are totally safe to eat. What's more, Zeratsky explained that some molds, like the ones on hard cheese, aren't harmful because they don't penetrate the entire block of cheese. "Mold generally can't penetrate far into hard and semisoft cheeses, such as cheddar, colby, Parmesan and Swiss. So you can cut away the moldy part and eat the rest of the cheese. Cut off at least 1 inch (2.5 centimeters) around and below the moldy spot. Be sure to keep the knife out of the mold, so it doesn't contaminate other parts of the cheese."

On the other hand, the USDA noted that aspergillus, a mold found on meat and poultry, can cause some pretty gnarly infections including severe lung infections and whole-body infections. OK, you might be thinking, who would eat moldy bread? Maybe not grown-up you, but chances are you have picked a moldy raspberry out of your newly-bought $10 container of organic fruit and ate the other berries.

Tossing a container of fruit that cost as much as your monthly Spotify subscription because of one little moldy berry sounds bananas, but that's exactly what you should do. Better yet, return it to the store and get a fresh one or a refund.

Additionally, if you live in a hot or humid climate — because mold loves nothing more than a warm and damp place to set up shop — you might want to keep things like bread in the fridge to help them stay mold-free longer.

If you're not sure which foods are safe to eat when you see a spot of mold and which ones you should toss immediately, the USDA has a chart that outlines mold and food safety. Or, if you're feeling iffy about it in the slightest, just toss it. Seriously.