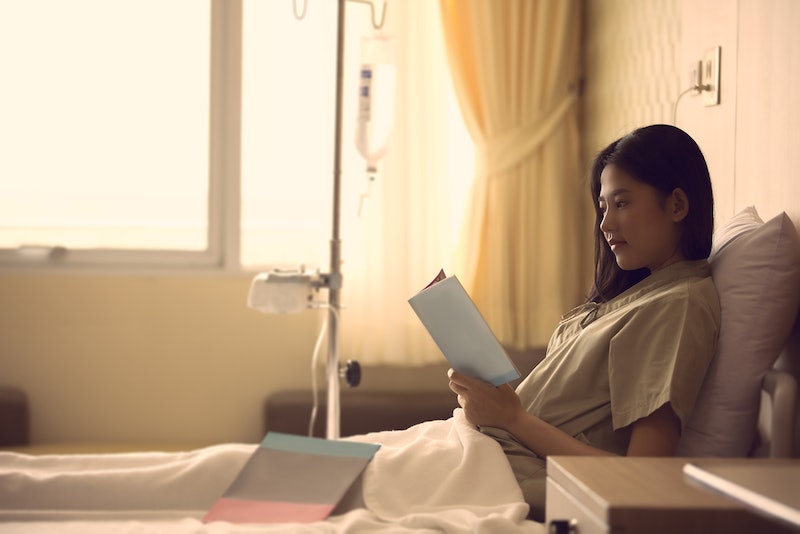 It would be safe to sum up my current sleep schedule, rather like my life, as "chaotic." I recently moved to a new country, my work life is nuts, builders keep turning up to my house at ungodly hours of the morning, and my cat likes to wake me up at 4 a.m. to check that I'm still breathing. As a freelance writer, I tend to read late and sleep late; I'm usually asleep by 1 a.m. and awake by 10 a.m. However, deep and consistent sleep can escape me as I often experience nightmares. When my editor approached me with an idea for an experiment — take the top scientific tip for good sleep and apply it for a week — I decided to see if it could shift my long-term sleep issues.

Science is pretty united in its emphasis on consistency as the key to healthy sleep. Going to bed at the same time every night and waking up at the same time every morning — including on weekends — has been shown to increase our health, as does routine in general. With consistent sleep routines, writes the National Sleep Foundation, "we naturally become more alert closer to our wake-up time. Our digestive systems become activated in advance of regular meal times in order to more efficiently process food. We start to relax and become sleepy prior to bedtimes. It turns out that these regular daily events serve to anchor our underlying daily rhythms."

Regularity across the day is a bonus as well. A study in 2014 found that consistent routines helped peoples' sleep in general. "People reported better sleep quality and fewer awakenings at night when they were consistent in the time they first went outside," the lead author told Reuters. As I have a highly flexible daily schedule because of my jobs, routine isn't ever going to be my cup of tea — but a consistent sleep schedule, I could do.

So for a week, I had a mission: consistent to bed, consistent to rise. I intended to put away the Kindle that meant I read till I lost track of time at night, set alarms, and generally be a Good Sleeping Citizen.

My partner and I attempt the "bed by 10:30 p.m., wake up by 7:30 a.m." thing. It's slightly hampered by two facts. One: our elderly cat has just had an operation and is groggy, glum, and covered in weird disinfectant that smells disgusting. Two: my husband is just back from an overseas trip, has powerful jetlag, and is falling asleep on my elbow by 8 p.m. I don't get to sleep till late, and we have to wake up early because the builders are coming to take out the rotted bits of the staircase. (See? Chaotic.)

We wake up grumpy and without part of our staircase. We let in the builders, take the cat to the cattery, and work madly all day. We're both so tired we turn off the light at 9:30 p.m. Did I mention we're catching a flight the next day? It's hard to have a consistent sleep schedule when your daily life is havoc.

Wake up at 7:30 a.m. again. My husband has been up since 6 a.m. because of the joys of jetlag, and attempts to wake me up by jumping on the bed. (This is not helpful.) The flight we catch is only an hour — we're visiting my family for Christmas — but the day is grueling. It turns out that being very tired is a great way to make sure you're asleep by 10:30 p.m. I'm sulky and we're both kept awake periodically by indigestion from a lavish dinner with my parents.

We wake up at 7.30am to see my family. I'm finding the early starts easier given that we're sleeping so early in the night, but I miss my nightly Kindle routine, even if it does usually keep me up till past midnight. We're asleep by about 10 p.m.

We sleep in a little later today — 9 a.m. — and I feel very happy because of it. The key to a consistent sleep schedule is also in finding the right rhythm for your own body; I seem to naturally gravitate to a later sleeping and waking time than my husband, even when he's not sneaking around getting coffee in a jetlag haze at 6 a.m. I also seem to need more sleep than he does in general, which is supported by science; a study in 2016 found that women often have greater sleep needs than men.

It's Christmas Eve, which is the day most people celebrate Christmas where we are, so we're up at 7:30 a.m. to prepare for going out to lunch. Visiting my family at Christmas means a lot of rich food, which isn't great for healthy sleep either. My husband is gradually more able to sleep in; jetlag takes a significant amount of time to relent, but he's adapting. Family time is stressful, so my body keeps me up late and I end up having nightmares again — but at least being in bed with lights off by 10:30 p.m. means I end up with a good amount of sleep anyway.

Today is Christmas Day, which obviously means getting up at 7:30 a.m. and singing Christmas carols on the phone to my brother in Australia. Excitement means I stay awake with my Kindle after 10:30 p.m. while my husband snoozes, but I don't feel the impulse to keep reading till 1 a.m and turn it off at around midnight.

Up at 8:30 a.m. and feeling completely fine. It seems that I've struck a good balance: reading till about 11 p.m. or 12 a.m. and getting up around 8 a.m. fits my natural circadian rhythms and the natural light, and makes me feel balanced and healthy. It took some experimenting but seems like a good formula to stick to going forward. Husband, meanwhile, was up at 6 a.m. and went back to bed exhausted till 9 p.m. Poor dude. This does mean, however, that I get my revenge — and jump on the bed to wake him up.

Consistency does seem to be a good idea for me, but it also seems that I respond best to a midnight-to-9am sleeping pattern. That routine means fewer nightmares for me, better sleep quality and a more rested feeling throughout the day. Though the occasional 10:30 p.m. sleep doesn't seem to bother me, either. Experimenting with regular sleep schedules is possible even in the midst of havoc, and it turns out it makes life a bit easier overall.