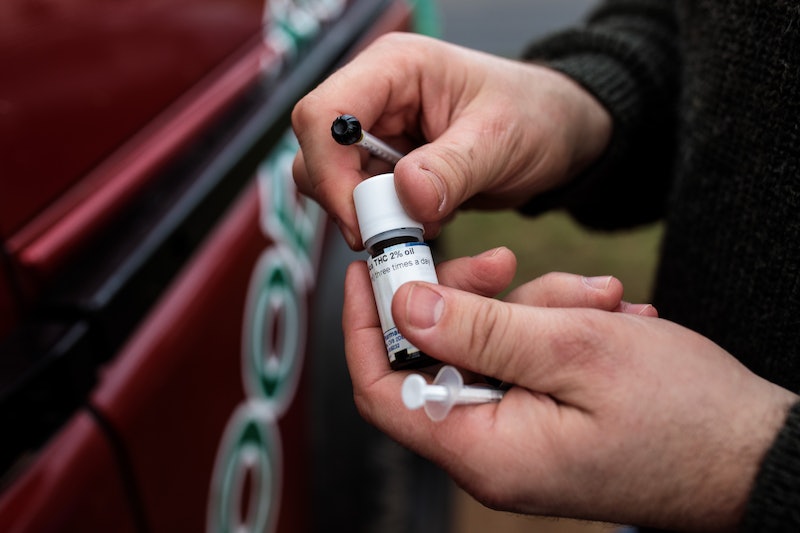 Over Memorial Day weekend, the TSA released new rules for flying with CBD, a chemical element found in cannabis. Under the new rules, certain CBD products will be allowed on flights — but you still can't fly with medical marijuana itself.

CBD is a chemical element found in marijuana and hemp that, in contrast to THC, is non-psychoactive. This means that it has physical but not cognitive effects. CBD is used to treat a wide variety of ailments, including epilepsy, glaucoma, Alzheimer's and more. The 2018 farm bill legalized certain, but not all, forms of CBD, and the TSA has updated its website to reflect that the CBD products authorized under the farm bill are now legal to take on airplanes.

This means that the chemical element THC and marijuana itself are still illegal at the federal level, and as such, aren't allowed on flights. This is true across the board, including in states that have legalized recreational or medical marijuana. Under TSA guidelines, marijuana isn't allowed on airplanes in any circumstance.

A spokesperson for the TSA told USA TODAY that if a traveler is found to be in possession of marijuana at a security checkpoint, it's TSA's policy to refer them to the airport's law enforcement agency. The spokesperson, Lorie Dankers, added that “the passenger’s originating and destination airports are not taken into account."

“TSA’s response to the discovery of marijuana is the same in every state and at every airport — regardless of whether marijuana has been or is going to be legalized," Dankers told USA TODAY.

This doesn't mean, however, that you'll necessarily be charged with a crime if you attempt to take marijuana on an airplane. The law enforcement agencies at several airports in California, where recreational marijuana is legal, told USA TODAY that they don't press charges against individuals who are referred to them for marijuana possession by the TSA. That's the policy of Los Angeles Airport Police and the Orange County Sheriff’s Department, which oversees law enforcement at John Wayne Airport.

“If the TSA calls us [about finding marijuana], we’d go up and make sure it is within the legal quantity. If it is, we’d just stand by while the passenger decides what to do with it,” Lieutenant Mark Gonzales, the airport police services bureau chief at the Orange County Sheriff’s Department, told USA TODAY. “TSA may not want it to fly, but that doesn’t mean it is illegal in California.”