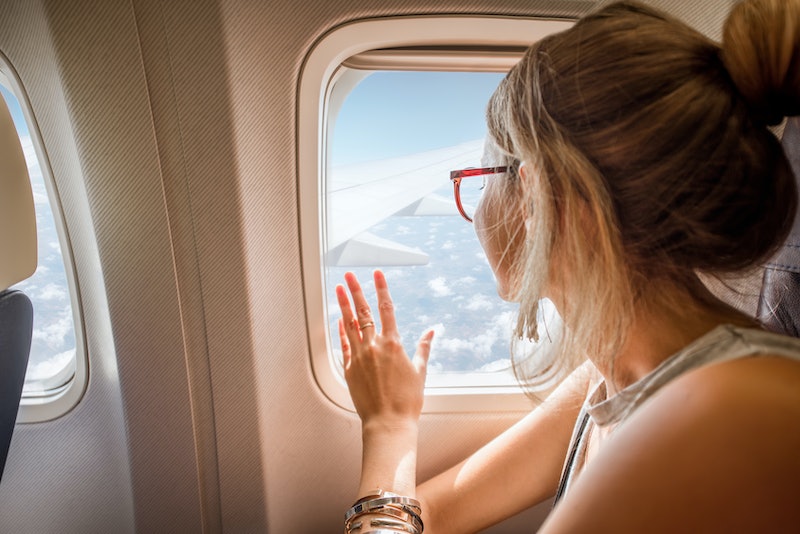 Getting sick while traveling can ruin the best-laid plans. And with flu season just around the corner, you might be concerned about catching any unwanted germs during your next flight. But can you get the flu on a plane? After hearing Wednesday morning’s news of an Emirates flight from Dubai that was quarantined after reports of sick passengers, it makes sense to feel a little extra concerned about getting on an airplane. According to ABC News, 10 people were taken to the hospital after the flight landed in New York after the CDC reported that up to 100 of the 520 passengers had fallen ill with flu-like symptoms. According to The Wall Street Journal, the CDC is still working on confirming the cause of the illness on the Emirates flight. So if you’re a little freaked out about getting sick while traveling, here are a few things you need to know.

First of all, it's not really possible to “instantaneously” get infected from someone who has the flu if you’re riding next to them in an enclosed space, Dr. Amesh Adalja, infectious disease specialist and spokesperson for Theraflu, tells Bustle. It takes about two days for flu symptoms to develop, Dr. Adalja says, meaning that if you start feeling sick while you’re on the plane, chances are you were sick before you got on it.

To avoid getting sick on your next flight, Dr. Adalja tells Bustle, “People should make sure they’re up-to-date on their vaccinations — including influenza — and practice good hand-hygiene. Also, try to distance oneself from people who are coughing, sneezing, or vomiting.” A study published in the Proceedings of the National Academy of Sciences says sitting in the window seat and staying there the entire flight will lower your chances of picking up germs during the flight, TIME reports. Not surprisingly, TIME says, the same study found that the aisle seat is where you’ll pick up the most germs.

Even though it’s nice to avoid the crowds, ABC News actually recommends letting everyone else board first. "All those people are clotted together in the boarding process; it’s far more likely that they’re going transmit a virus to each other," Dr. Nicholas Testa told ABC News. "Just let the other people board. And give yourself a moment." ABC News also recommends disinfecting all of the hard surfaces, such as tray tables and armrests, because the flight crew doesn’t have time to do that between each flight, and the flu virus can live on hard surfaces for up to 24 hours.

“Think about how many handles and surfaces you touch when traveling and how often these surfaces — door handles, seat trays, light fixtures — have actually been cleaned,” Dr. Michelle Barron told Men’s Health. Bring a pack of travel antiseptic wipes so you can wipe down all of the surfaces you touch. Men’s Health also recommends bringing some hand sanitizer to clean your hands off when you’re done sanitizing all those surfaces.

If you’re on a longer flight, says ABC News, use nasal spray every two hours to keep your nasal passages moist. "One of the things we’ve noticed,” Dr. Testa told ABC News, “particularly on airplanes, is that as soon as your mucous membranes, particularly in your nose and your mouth, start to dry out, we lose one of the most valuable defenses for preventing respiratory viruses.” Also, says ABC News, turn on your air vent. This will increase the air circulation on the plane and potentially direct the germs from coughs and sneezes away from you.

The internet had a bit of a collective scare after news broke of the Emirates flight Wednesday morning. But by staying calm and prepared, you can protect yourself from catching the flu or other illnesses while traveling this season.