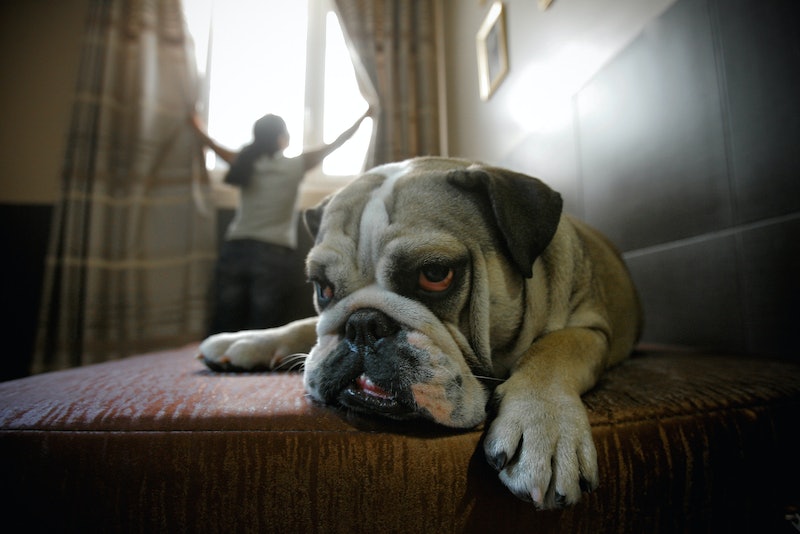 Flu season can be a potentially dangerous time for both humans and their pets. If you’re grappling with the flu this winter, you might be wondering if your beloved fur baby can catch the flu from you. Though research is somewhat mixed, the short answer is, yes, you can potentially give your pet the flu, even though such cases are rare.

First thing's first: yes, there is such a thing as dog flu, yes, it is different from human flu, and that *is* common. "Canine Influenza, or dog flu, is caused by a Type A influenza virus. There are two different Type A influenzas that are known to infect dogs, H3N8 and H3N2. Both are extremely contagious viruses that affect the respiratory system primarily," Dr. Carly Fox of the Animal Medical Center (AMC) in NYC tells Bustle via email.

"Flu is spread through respiratory secretions, produced during sneezing and coughing," says Dr. Fox. "Dogs are constantly sniffing each other and their environment, so infection is very common and the virus is highly contagious." Dr. Fox says that the majority of dogs exposed to the canine flu virus become infected, and up to 80 percent will come down with symptoms, such as coughing, sneezing, fever, lethargy, and poor appetite. Luckily, the mortality rate remains relatively low at around 10 percent, she notes.

Even though the risk for human-to-pet transmission seems rare, scientists from Oregon State University wrote in a 2012 press release on their research that humans passing illnesses to animals, a process called reverse zoonosis, can happen. While it’s commonly understood that strains of flu can develop in animals and get passed to humans, like bird or swine flu, for instance, reverse zoonosis happens when animals get sick from infected humans. The researchers wrote that there’s evidence that humans have passed the H1N1 flu strain to dogs and cats, and some animals have died from catching the illness.

Similarly, in a study published online in the journal PLOS One in 2014, there have been increasing reports of people passing illnesses to animals. The study’s authors found that viruses were the second most transmitted pathogen from humans to animals. “Reverse zoonoses reports regarding viral pathogens began in 1998 and have since been focused primarily on influenza with great interest surrounding the 2009 H1N1 pandemic,” the study’s authors wrote in the paper. “These studies were conducted largely in the United States.”

Joseph Stromberg wrote for Smithsonian in 2012 that, according to the Oregon State veterinary research, in partnership with Iowa State University, pets might be increasingly vulnerable to flu strain mutations passed from their human family members. “We worry a lot about zoonoses, the transmission of diseases from animals to people,” lead study author Christiane Loehr, a professor at the OSU College of Veterinary Medicine, told Smithsonian. “But most people don’t realize that humans can also pass diseases to animals, and this raises questions and concerns about mutations, new viral forms and evolving diseases that may potentially be zoonotic. And, of course, there is concern about the health of the animals.”

“All viruses can mutate, but the influenza virus raises special concern because it can change whole segments of its viral sequence fairly easily," Loehr said in the Oregon State press release. “In terms of hosts and mutations, who's to say that the cat couldn't be the new pig? We'd just like to know more about this.”

Basically, some studies show that, while not exactly common, it is possible that your fur kiddo can (maybe) catch the flu from you. Wag writes that, according to a Finnish study, only four dogs out of 92 flu-contaminated households caught the flu from their humans. “Researchers concluded that at least one of these pets had contracted it directly from their H1N1-infected owner, as they had had zero exposure to any other humans or animals before their owner was admitted and quarantined,” says Wag.

If your pet starts showing signs of the flu (canine or otherwise), such as lethargy, loss of appetite, fever, coughing, or difficulty breathing or sleeping, Dr. Fox recommends that you quarantine your pet (no shared beds or food and water bowls), and see your vet as soon as possible for treatment. Make sure to avoid the dog park, day care, and contact with other pups until your fur baby is fully recovered. Washing your hands and changing clothes after caring for a flu-ridden pup is also important, Dr. Fox says. Then, when next season comes around, you can check with your vet to see if your pupper is a good candidate for the flu vaccine, so they can reduce their risk of getting it again.