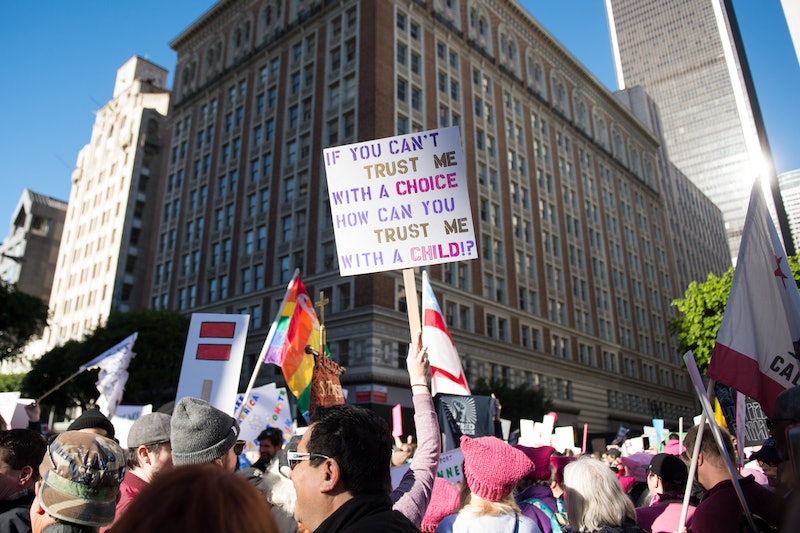 Less than two months after the Women's March on Jan. 21, on March 8, there is set to be another massive demonstration, "A Day Without A Woman," a general strike to "to stand up for America's democratic principles." While many may want to participate in it some are worried that it could cause trouble at work. So can you lose your job for joining the women's strike?

The quick answer is that U.S. labor law doesn't necessarily protect you so you might want to ask off if you can.

The National Labor Relations Board, the government agency that's in charge of ensuring workers' rights to organize, explains that workers have the right to strike, but that not all strikes are protected. There are two types of lawful strikes that are protected: those of "economic strikers" and those of "unfair labor practice strikers." If you were fired for striking, you would have to successfully argue that your strike was for one of those two reasons. That might be difficult given the many reasons that the Women's March organizers give for the strike such as uniting the community or fighting for "American principles." When worded that broadly, they by no means clearly connect to specific "unfair labor practices" or "economic" concerns.

However, the day clearly implicates the role of business in the struggle for equal rights for women. In the post on the Women's March Instagram, the organizers called out corporations:

We ask: do businesses support our communities, or do they drain our communities? Do they strive for gender equity or do they support the policies and leaders that perpetuate oppression? Do they align with a sustainable environment or do they profit off destruction and steal the futures of our children?

"We saw what happened when millions of us stood together in January, and now we know that our army of love greatly outnumbers the army of fear, greed and hatred," the post continues.

If you don't have paid vacation, or even the right to vacation, it's a lot harder to decide whether or not to participate.

The strike organizers wrote in a column for The Guardian about what they hope to achieve in the protest — many of it related to labor but plenty of other issues, as well:

The idea is to mobilize women, including trans women, and all who support them in an international day of struggle – a day of striking, marching, blocking roads, bridges, and squares, abstaining from domestic, care and sex work, boycotting, calling out misogynistic politicians and companies, striking in educational institutions.

That sounds like it could make a significant impact for feminism in all spheres — not just in Fortune 500 companies.