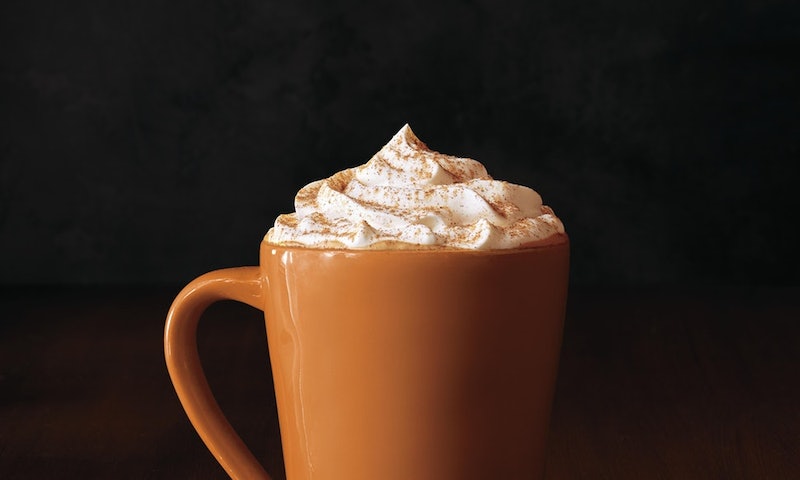 If the only thing standing between you and the enjoyment of a PSL is the question of whether or not it's made with animal products, you're going to want to know if there's a way to make the Starbucks Pumpkin Spice Latté vegan. With recently confirmed news that the PSL is coming back as early as August 28, 2018, fall drink fans are likely filled to the brim with anticipation for the seasonal beverage; and that includes vegans latté lovers. However, in the past, the PSL hasn't been vegan, or even plain ol' dairy-free, so vegan customers haven't been able to partake in that PSL life. Will 2018 be changing that?

Unfortunately, the short answer is no — kind of. Like previous years, in 2018, the Pumpkin Spice Latté is on the list of Starbucks drinks that you can't turn into a completely vegan drink, even with customizations like Almondmilk or Coconutmilk. Though you can certainly swap the normal cow's milk out for one of the few dairy-free options Starbucks offers, it won't make the Pumpkin Spice Latté vegan because it's more than just the milk adding dairy to this drink: The classic Pumpkin Spice sauce that Starbucks uses has non-vegan ingredients, and unfortunately, that can't be swapped out if you're ordering a PSL.

This isn't anything new. In fact, Pumpkin Spice Latté fans have been petitioning for a dairy free Pumpkin Spice sauce for years. I mean literally: there's a Change.or petition with over 11,500 signatures begging the coffee giants to create a PSL sauce that's free of animal products. The pre-mixed base of the drink includes condensed milk, and as you can imagine, baristas can't take the condensed milk out of the base — they can only mix the base with a milk alternative to lower the dairy content, but not remove it.

However, just because you can't order a PSL if you're vegan, that doesn't mean you don't have any options. Bustle reached out to Starbucks to find out what vegan Starbucks fans can do to get in on the PSL life, and as they tell Bustle, vegan customers can use the following hack: Request the Pumpkin Spice topping mix (that's 100 percent dairy-free) be added to a plain or Vanilla Latté that's made with Soy milk, Almondmilk, or Coconutmilk. The Pumpkin Spice topping is made of cinnamon, nutmeg, ginger and cloves and will totally warm up and autumn up your vegan drink order.

So, while we all wonder whether or not there will ever be a day that Starbucks introduces a vegan Pumpkin Spice sauce, vegans can enjoy a makeshift PSL. Just ask your barista for a few shakes of the spice topping on your drink order, and enjoy your own special off-menu drink item. While it won't taste exactly like the OG PSL, it will taste like warm, cozy fall, and that's really all that matters. Personally, when it comes to fall, I'll take pumpkin and spice in whatever form I can find them in.