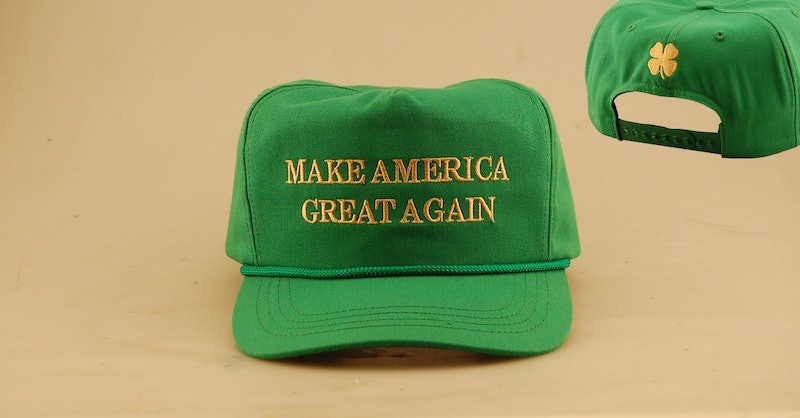 One of the most celebrated holidays in America is coming up, and POTUS just annoyed the very people whom it celebrates. Donald Trump's team messed up his St. Patrick's Day merchandise by using a four-leaf clover instead of a shamrock, which might not seem like a big deal, but really is. The kelly green and gold "Make America Great Again" hat in question quickly met resistance online from people of Irish ancestry.

The irony literally abounds here. First of all, Trump himself is Scottish on his mother's side, and historically the Irish and the Scottish don't get along. Also, the Irish were once the most persecuted ethnic group of immigrants in the United States, and now their symbols are being (wrongly) appropriated to support a politician whose bread and butter is racial discrimination against immigrants.

The mistake is actually pretty insulting to Irish culture, because the shamrock has real significance to the country's history, whereas the four-leaf clover doesn't. As the Irish tell it, St. Patrick arrived in Ireland in 431 and converted the Pagans living on the island to Catholicism by using the shamrock to represent the Holy Trinity.

The metaphor is particularly apt, because even though there are three separate leaves of the clover, they are all combined in one plant, just as Catholics believe in three separate persons but one God. Obviously, the story doesn't work with a four-leaf clover, so though the mistake may not seem significant to the non-Irish and/or non-Catholics, it's a pretty big deal.

Apparently, though, this is not the first time this has happened to a president. According to the Blaze, "O'Bama" T-shirts had to be reprinted in 2012 because the reelection campaign accidentally used the clover instead of the shamrock too. Arguably, there's a difference between the two situations since Trump's reputation as a successful businessman is what his entire election was based off of, but I won't split hairs.

Irish culture, and particularly St. Patrick's Day, is so mainstream in the United States that no one is probably too offended by this gaffe, but there's still an important lesson here about cultural appropriation and respect. It's not cool to profit off of cultural symbols that you don't fully appreciate, and the least you can do to respect a culture is do a little research first. In an age where all the information in the world is at your fingertips, lazy slips like this just aren't acceptable. According to the New York Times, the hats are no longer for sale, so at least they won't be spreading alternative facts about shamrocks on Friday.