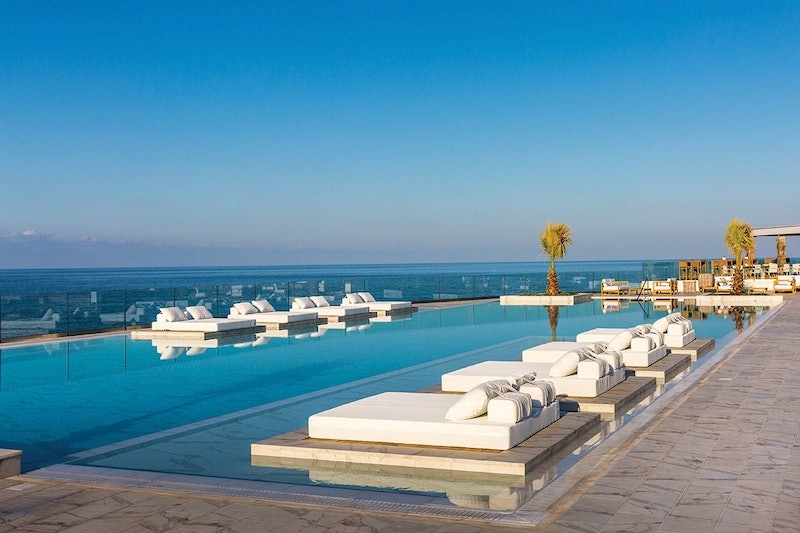 Celeb's Go Dating may be coming to a close, but that means the cast will soon be heading to the beautiful Crete villa for the series finale. Much like the Love Island villa, this setting is sure to create some vacation-envy as the celebs soak up some glorious Greek rays and chillax with their perfect matches. But can you stay at the Celebs Go Dating hotel, or is it used solely for the show?

Well, you're in luck because the Celebs Go Dating cast will be occupying the Abaton Island Resort & Spa for the finale. So if you want the summer to continue well on into September, you'll can to book yourself a room at the 5-star hotel and experience the pleasures that the cast will be luxuriating in during the show.

As the Evening Standard reports, the resort is only a couple years old but as it's situated on an island recently "given the title of Best Cruise Destination in the World," it's certainly a must-visit. The Sun notes that prices range between £321 to £7,000 per night, depending on which room you choose to stay in. These include "seafront guestrooms, rooms with a shared pool, private outdoor jacuzzi and even private villa's with incredible views that look out to the ocean."

If you opt for a room without the add-ons (i.e. the private pool), the resort has a central pool that you can enjoy alongside spectacular views of the Meditteranean. The resort also has a private beach so you can enjoy your stay in a multitude of exotic ways.

Not only that, but there are also a handful of fantastic restaurants and bars in and around the resort such as "the Ladies and Gentleman Lobby Bar, F-Zin Ivy League Resturant, Elemes Cretan Cuisine, Bony Fish SeaFood Resturant, WOW Steak and Buddha-Bar Beach," The Sun writes.

You'll get to see a lot of these aspects of the resort in the finale of Celebs Go Dating, and maybe even the town of Malia as according to the Mirror Jack Fincham, Megan Barton-Hanson, and Demi Sims "ventured out of their five-star hotel to get stuck in to the party town's local delicacies (shots and fish bowls)." Since their first day in the resort has already aired, if this adventure were to be featured, it would be in the series finale tonight.

"It's fine for them to go off and have fun — they're not being kept under lock and key," a source told the newspaper. "But they are recognisable faces and Malia is a huge party town full of drunk revellers — anything could have happened."

I've reached out to a rep for Channel 4 to clarify whether or not this actually happened, but have yet to hear back. I'll keep you posted if I do. Regardless, it's pretty safe to say that the cast of Celeb's Go Dating had the time of their lives out in Crete, and I mean who wouldn't.