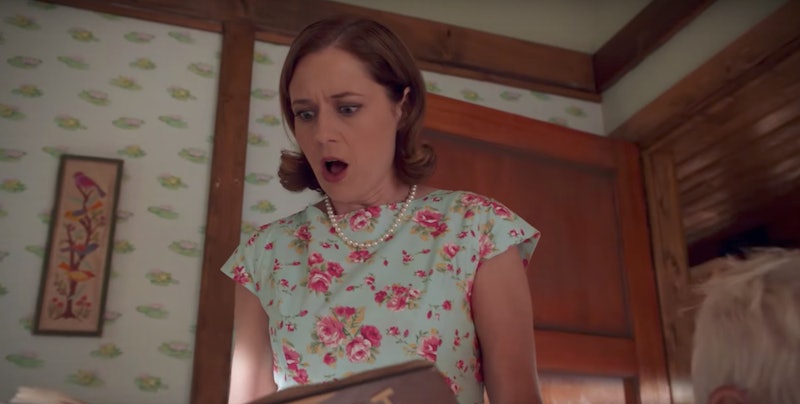 TBS's new comedy about visitors of a mountain vacation resort, premieres Aug. 3. The Guest Book centers around the sign-in book that lives in Froggy Cottage in the town of Mount Trace, which tells the stories of the quirky cast of characters who have made the cabin their temporary home. So, can you stay there at Froggy Cottage?

Like the towns in Garcia's other shows, specifically My Name Is Earl and Raising Hope, The Guest Book's Mount Trace is a fictional town. Froggy Cottage isn't real either, but the majority of the show's exteriors were filmed in a real mountain resort town. According to IMDB, The Guest Book was filmed in Pine Mountain Club, California.

Pine Mountain Club is located about 90 miles from Los Angeles and its website touts that it is a "nearby faraway place" and "one of southern California's most beautiful residential communities." While Pine Mountain Club is a residential area, there are hotels and vacation rentals listed on VRBO and AirBNB. There are also summer camps, campgrounds, and RV hookups in the area.

Honestly, Pine Mountain Club appears to be way more Dirty Dancing in vibe as opposed to sharing the off-beat tone of The Guest Book. And, while there are many ways to take a summer vacation in Pine Mountain Club, California, there's no such place on the premises quite like Froggy Cottage. The erratic characters depicted in The Guest Books trailer or on the show's Instagram — consisting of addicts in love, an exotic dancer with an arrow through her breast, and an Amish child with a death wish — won't be there. And neither will the frog figurines that gave the cottage its name.

According to an Instagram post, the fictional Froggy Cottage comes with an array of amenities: 63 VHS tapes, 12 spoons, 11 forks, two curtains, 16 chairs and two stools, three peanut M&Ms, 71 frog figurines, and 21 pieces of plastic fruit. That's a lot of frogs.

There are plenty of American mountain towns you could visit this summer, all of which likely have more normal townspeople, less seedy establishments, and certainly fewer frog figurines. But they won't have the character — or characters — a viewer can find in Mount Trace. The only way to truly visit Froggy Cottage this summer is to tune in to The Guest Book Thursdays on TBS.

More like this
These 25 International Horror Movies On Netflix Prove Fear Is A Universal Language
By Bustle Editors
What Reporting On The UK’s Most Prolific Cyber Stalker Taught Me
By Sirin Kale
'The Ex-Wife’s First Look Pics Are Giving 'Gone Girl' Vibes
By Bustle UK
The Most Anticipated Books Of October 2022
By K.W. Colyard
Get Even More From Bustle — Sign Up For The Newsletter