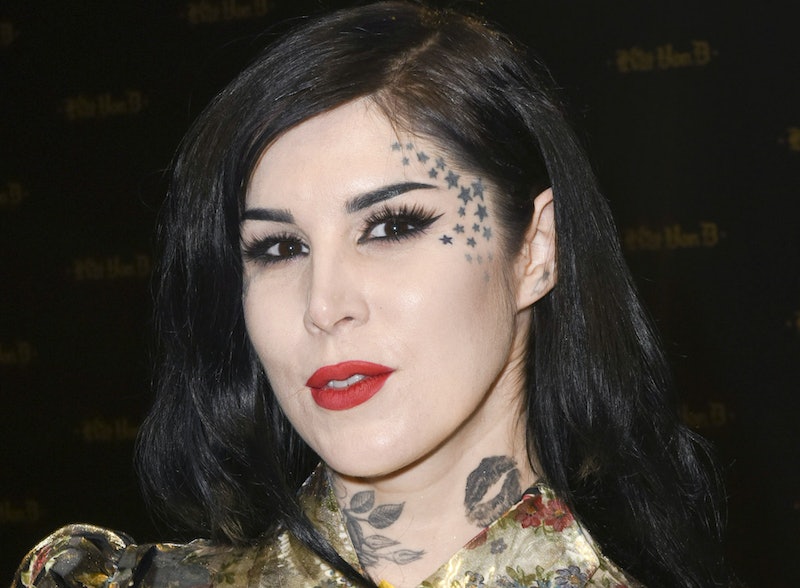 If you're a fan of their Tattoo Liner, Lock It Foundation, or Everlasting Liquid Lip products, it's time to sit up and pay attention: Kat Von D stepped down from her makeup brand yesterday. Yep, the creator of the eponymous line, which is known for its vegan ingredients and long-wearing formulations, has announced she will no longer be involved at all, and has sold off her business to someone else. But what exactly does this all mean for the brand, and will you still be able to buy its products?

Kat announced her departure from her namesake brand via a statement on her Instagram yesterday, as she addressed her "dearest fans." "This past year has been one of great change for me. As many of you know, I gave birth to my beautiful baby boy, launched my vegan shoe line, and am now busy prepping to release my long awaited album in the Spring, followed by an international tour," she began.

"As much as I wish I could balance all of this, on top of continuing my makeup line, it has become clear to me that I just can’t do everything at the maximum capacity. It's hard to admit this, since I’ve always said “You can do everything and anything.” But I don’t think admitting one's limits is a bad thing."

She then explained what she plans to do with her brand, writing:

"I’ve decided to sell my shares of the brand, turning it over to Kendo, my partners for the past 11 years. This was not an easy decision, but after careful consideration, I decided I wanted the makeup line to continue to thrive and grow, and I believe Kendo is primed to do just that."

Kendo is the umbrella brand that also looks after the likes of Marc Jacobs Beauty and Ole Henriksen.

But what exactly does this mean for consumers of Kat Von D? Well, by the sound of things, not too much. The brand has re-branded as KVD Vegan Beauty, for one, but Von D reassured fans in her post that, "the transition for you, my loyal customers, will be seamless."

A press representative for the brand also explained to Allure that "KVD Vegan Beauty is being led by the same people that built the global empire with Kat and helped create the products, programs, and events that you know and love."

I have also reached out to reps for the brand to check the current status of the products, and they confirmed that nothing will change for the brand, and there will actually be some great new launches coming soon. Phew.