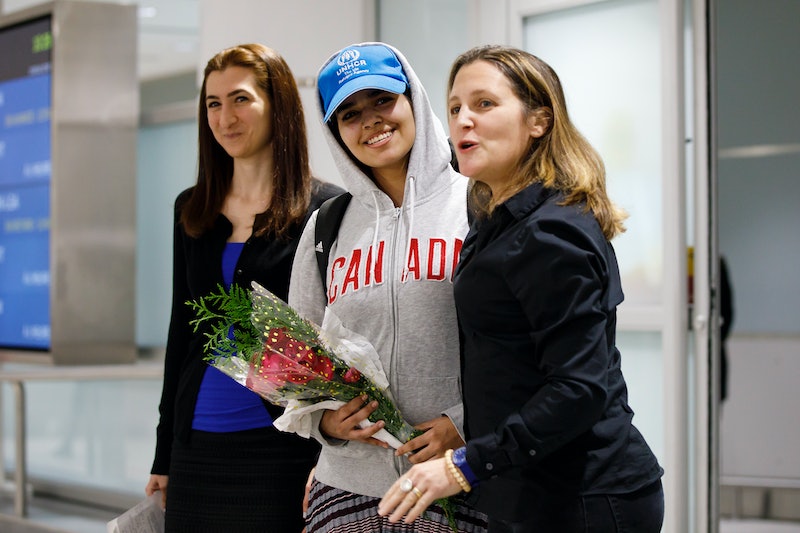 A Saudi teenager whose attempt to flee her family garnered international attention earlier this month when it culminated in a tense two-day standoff at an airport hotel in Thailand has officially been granted asylum abroad. Canada welcomed Rahaf Mohammed Alqunun into the country on Saturday, with a government official describing the 18-year-old as "a very brave new Canadian."

"Canada was glad that we were able to act quickly and to offer refuge to a refugee at the request of UNHCR and to offer refuge to a person whose life was in danger," the Associated Press reported Canadian Foreign Affairs Minister Chrystia Freeland told reporters Saturday after greeting Alqunun at Toronto’s Pearson International Airport. Freeland called Alqunun "a very brave new Canadian" who'd had a "very long and tiring journey."

After initially attempting to deport her back to Saudi Arabia, Thai immigration authorities allowed Alqunun to stay in Thailand last week under the protection of the United Nations High Commissioner for Refugees (UNHCR). Alqunun has said she'd fled her family while on vacation in Kuwait, alleging physical and verbal abuse, forced imprisonment, and a fear for her life. The teen was reportedly stopped during a layover in Thailand by an alleged representative of the Saudi embassy who took her passport and reported her to Thai immigration authorities. When Thai authorities attempted to put Alqunun on a plane back to her family in Saudi Arabia, she barricaded herself in a Suvarnabhumi Airport hotel in Bangkok and launched a Twitter campaign to raise attention to her asylum request.

Alqunun told Human Rights Watch that she had been physically and verbally abused by male relatives, in the form of beatings and death threats. According to the nonprofit, Alqunun's male relatives once imprisoned her in her room for six months after she cut her hair without their permission. What's more, Human Rights Watch has argued that Alqunun likely would have faced criminal charges if she'd been forced to return to Saudi Arabia. According to the nonprofit, charges of "parental disobedience" and "harming the reputation of the kingdom" are punishable by imprisonment in Saudi Arabia.

Under Saudi's male guardianship laws, women of all ages must have the permission of a male guardian to get a passport, travel, marry, or even exit prison. In some instances, the permission of a male guardian can be demanded of women seeking to rent an apartment, open a bank account, obtain a job, or get medical treatment. These restrictive laws are often part of the reason why some Saudi women have, like Alqunun, attempted to flee when vacationing in other countries.

On Friday, Prime Minister Justin Trudeau confirmed that Canada had agreed to grant Alqunun asylum and resettle her within the country. He went on to say it was something the country was "pleased" to do "because Canada is a country that understands how important it is to stand up for human rights, to stand up for women's rights around the world," the Toronto City News reported.

But, as UNHCR was quick to point out, not all refugees get the happy ending Alqunun did. "Ms. Alqunun's plight has captured the world's attention over the past few days, providing a glimpse into the precarious situation of millions of refugees worldwide." the United Nation's High Commissioner for Refugees Filippo Grandi said in a statement. "Refugee protection today is often under threat and cannot always be assured, but in this instance international refugee law and overriding values of humanity have prevailed."