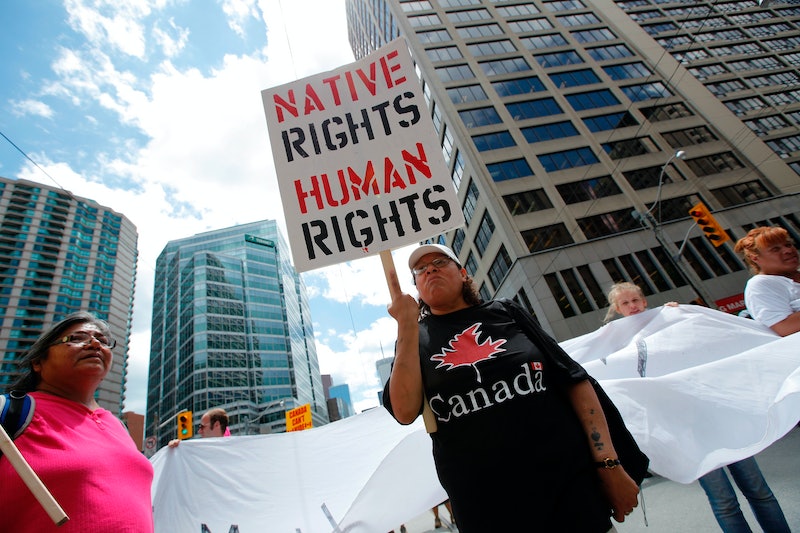 A class action lawsuit was filed on behalf of two indigenous Canadian women who claim they were coerced into sterilization procedures after giving birth, following a July report highlighting the problem in the Saskatchewan area of central Canada. The women (whose identities must remain anonymous per a judge's orders) allege their fallopian tubes were tied either without their consent or when they felt pressured by doctors. They are seeking 7 million Canadian dollars ($5.4 million) each in damages.

"These are people whose choices were taken away and they are choices based in fundamental human rights," Alisa Lombard, the lawyer representing the plaintiffs, told The Guardian. "The very intimate and personal decision to have — or to not have children — belongs to the individual. It’s not something that can be fettered, or influenced, or coerced, or forced."

Lombard said she's been contacted by dozens more women with similar stories since filing the class action lawsuit. "There are some women that it not only happened to them, but it happened to their mothers and daughters," she said.

The lawsuit still needs to be certified by a judge in order to move forward, and if it is, other indigenous women will be able to join.

The Saskatoon Health Region knew there were reports of alleged coercion in a Saskatoon hospital before the lawsuit, as indigenous women told the media about feeling pressured into undergoing sterilization in 2015. The health agency asked an indigenous doctor and lawyer to compile an independent review, and their findings were released this summer.

The report highlighted stories of sterilization procedures done to seven indigenous Canadian women who allege they were coerced. The women also remained anonymous, but all described feeling stressed and powerless, and some didn't understand that the tubal ligation would be permanent.

"We should have options, to decide whether or not we want something done to our bodies," one of the women told the report's authors, Dr. Yvonne Boyer and Dr. Judith Bartlett.

The Saskatoon Health Region subsequently apologized to the women whose negative experiences were outlined in the review and updated the criteria for tubal ligation. Jackie Mann, vice president of integrated health services, told the women at a July news conference: "I'm sorry that you were not treated with the respect, compassion ... and all of the support that you needed and deserved. No woman should be treated the way you were treated."

The women's allegations in the lawsuit mirror those in the report. The first plaintiff claims she told doctors she didn't want the sterilization procedure after giving birth in 2001, but the procedure was carried out any way. The second also says she didn't want her fallopian tubes tied in 2008, but claims a doctor pressured her into it right before she had an emergency cesarean section and was already on medication. She eventually consented, and had the surgery right after the C-section.

Lombard, the lawyer on the case, pointed out that "imposing measures intended to prevent births" within a group is considered genocide by the United Nations.

Indigenous communities experiencing coerced and forced sterilization in Canada and the United States goes all the way back to colonization, but recent examples have been documented in both countries. In the book An Act of Genocide: Colonialism and the Sterilization of Aboriginal Women, author Karen Stote explains that strong birth control pills were given to indigenous Canadian women in the 1960s in order to reduce the birth rate and "the size of the homes the federal government would need to provide."

Puerto Rican women experienced similar attempts at population control by the U.S. government into the 1970s. Sterilization was free and legal, while no other forms of birth control were made available and the fact that tubal ligation is permanent was not made clear to women.

The current class action lawsuit suggests indigenous women in Canada still didn't have complete control over their reproductive choices in the early 2000s. And the women making allegations of mistreatment want justice.