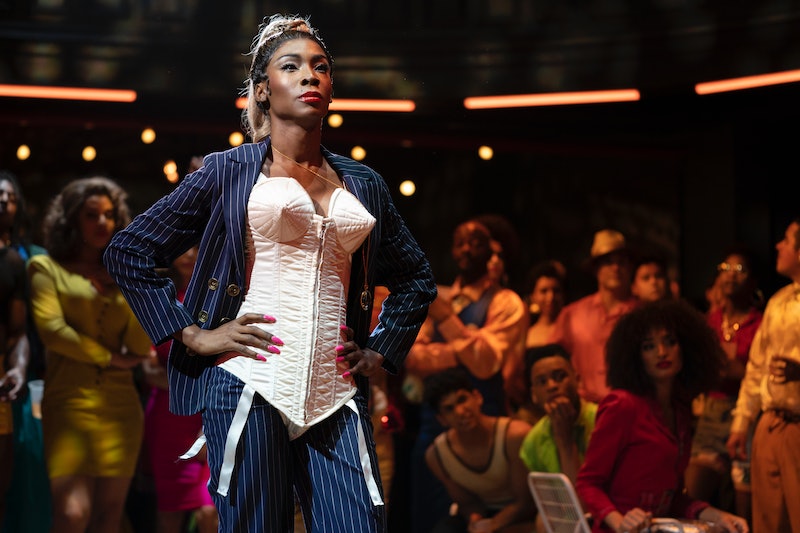 Spoilers for Pose Season 2 Episode 4. The houses in Pose may be fiercely competitive and catty on the ballroom floor, but ultimately they are all about sticking together as a united front against a world that treats them like they are less than human. Sadly, this was made abundantly clear in the Season 4 episode "Never Knew Love Like This Before," in which the community came together to celebrate the life and legacy of Candy Ferocity, who is found murdered in a hotel room. Her murder is a major blow to every character on the show as well as the dedicated fandom who love the fierce, funny, and authentic diva. But Candy’s death on Pose is more than just a major turning point for the trajectory of the series — it's also a timely reminder that trans women’s lives have always been in danger and still are in 2019.

Actress Angelica Ross, who portrays Candy, was the first person to have her heart broken by this storyline when she got a fateful call about Candy’s impending demise. “I was devastated and shocked and speechless,” Ross tells Bustle via telephone prior to the episode’s release. “[Co-creator and director] Ryan Murphy called me personally and I was shocked as hell that he was calling me. So, I get on the phone with Ryan and he said, 'Let me just pull this Band-Aid off,' and tells me that Candy will be murdered in Episode 4 and explained how it was gonna go down.”

Ross was sad about Candy's death, but she quickly remembered that one of Pose's purposes is to explore the dangers faced by trans women faced in 1990 that are still happening as the show currently airs. She agreed with Murphy that using her character to highlight fatal violence against trans women was the right decision, even if it wasn't easy to deal with her own emotional ramifications surrounding Candy's final moments.

“We both immediately started talking about why this story was important and needed to be told and why I was probably the right person to tell this story,” says Ross. “And I felt the responsibility with that and immediately said I would take it on. But I’ve been holding a bittersweet energy ever since. For a while I couldn’t tell my cast...they did not know. I was the first person to read the script and when I OK’ed it they sent it out to everyone else. Even still, filming that and having trans women dying every week that we are filming has been totally taxing.”

Ross isn't exaggerating. According to the Human Rights Campaign, there were 51 known cases of fatal violence against trans people, the majority of whom are women of color under 35, in 2017-2018, and at least 10 of them were sex workers. In 2019, there have already been 11 reported deaths of trans women through the end of June. And, these statistics don't account for many deaths that have likely gone unreported.

Candy's death in the show is also based in real-life events. Her murder is reminiscent of Venus Xtravaganza who was murdered and left dead under a bed in a hotel room in 1988, as Dazed reports. Years later, in June 2019, Layleen Polanco Xtravaganza was found dead in her cell after being held at Rikers Island jail because she could not afford her $500 bail, per The New York Times.

The combination of real-life tragedies and Candy’s fate took a toll on Ross as Episode 4’s filming drew closer. “I just couldn’t prepare," she says quietly after a thoughtful pause. "I didn’t want to prepare. It’s a situation that you can’t prepare for. You can’t prepare for the emotions. I could barely learn my lines. Reading the lines was just an emotional experience. So, I just had to read my script, get my lines, kind of know the general gist of it, and then really hunker down and learn my lines on the day of filming.”

While some actors lean on professional techniques to get through an emotionally draining day work day, Ross chose to let her own instincts and emotions drive her performance. She says she was quiet around a lot of the cast, including the actors who played Candy’s parents, with whom she simply filmed her scene and let the natural chemistry take its course.

Ross undoubtedly nailed her final Pose episode and made sure Candy’s final words of wisdom had a lasting impact on the characters. She hints that Pray Tell, who had a contentious relationship with Candy, will likely be affected the most by her murder because Candy had the free spirit that he wished to have all the time. “Candy expressed a lot of things that Pray Tell did not have the courage to,” Ross affirms. “He gets a little whimsical and feminine behind that podium but he’s not wearing that stuff in the street. He’s wearing a suit and tie and top hat and cane. So, it’s gonna speak to this element that will help free him.”

Candy’s fate on Pose is a sad reflection of the violence that trans women potentially face every day. But, her life also reminds fans to stand for what's right, fight for their own dreams, be a “down for whatever” friend, and keep it real at all times. She may be gone but Candy will never be forgotten because, in the words of Ross, “everyone loves a real b*tch.”