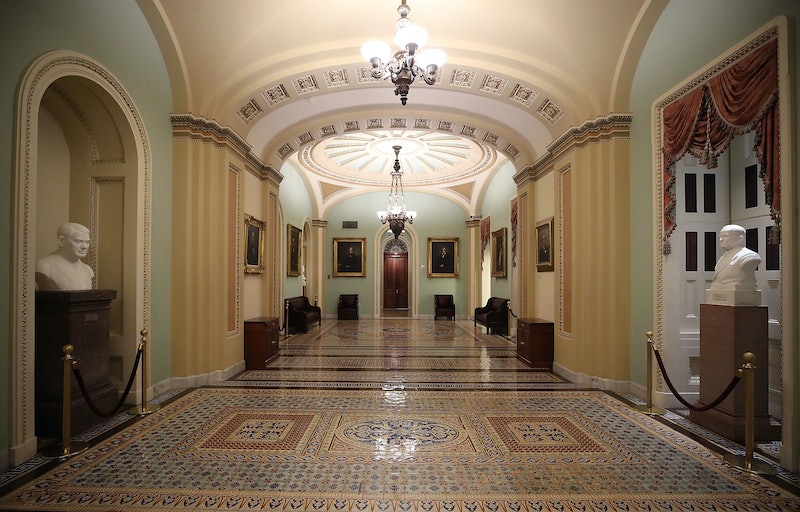 Most interns on Capitol Hill work for free, but that will finally change after years of backlash. On Tuesday, the House Administration Committee gave its final approval for a program that will pay Capitol Hill interns. Congress initially voted to instate the funding six months ago, and both legislative chambers are now set to give stipends to young workers.

The new program provides $14 million for intern payments that will be distributed across the Hill. Each House office will get $20,000 annually to pay its interns, according to Vox. Senate offices' funds will differ depending on the size of the state, but will average to around $50,000 per office. As for the interns themselves, they'll each receive stipends of up to $1,800 a month, according to The Washington Post.

Most offices forgo paying interns at the moment, seemingly because of tight budgets that have only gotten tighter over the last decade. In 2016, TechCongress' Travis Moore noted that he received a $1,000 per month stipend while interning for former Rep. Henry Waxman (D-California) in 2004, but the representative's office had abandoned intern compensation by 2014.

Much of the push to pay congressional interns was spearheaded by the nonprofit Pay Our Interns. The group came out with a study in 2017 showing that fewer than 10 percent of House offices paid their interns, while just 31 percent of Democratic Senate offices and 51 percent of Republican Senate offices did. The report also found that the average cost for someone to live and work in Washington D.C. during an internship period is $6,000.

"I was an unpaid intern on the Hill, that was my first one, I had a part-time job while doing that, kind of realizing that no one looked like me in the hallways of Congress except the janitors," Carlos Mark Vera, founder of Pay Our Interns, told WUSA9 last year. He said that he struggled to make ends meet at the time and couldn't afford the formal wardrobe required for the position. "I realized something had to change."

It used to be a normal to pay interns on Capitol Hill, according to The Washington Post. Sen. Chuck Schumer (D-New York), for example, was paid when he interned on the Hill in 1969. Congress used to allocate funds specifically for intern positions, as the new program approved on Tuesday does. But that money was reduced over the years alongside broader budget cuts.

One of the reasons Congress has been criticized for not paying most interns is because the system is considered to be an access barrier that disproportionately affects minorities. "There's a reason why, if you walk around the halls, all the interns look like me," Anthony Eliopoulos — a white, male House intern — told American University's WAMU radio in 2017.

In his own conversation with WAMU, Vera argued that paying interns shouldn't be a partisan issue. "What's one thing that Sen. Bernie Sanders has in common with Sen. Rand Paul?" he said. "They both pay their interns."

"Interns aren't asking for the red carpet," Vera added. "They're just asking for a little bit of help, and they'll do the rest."